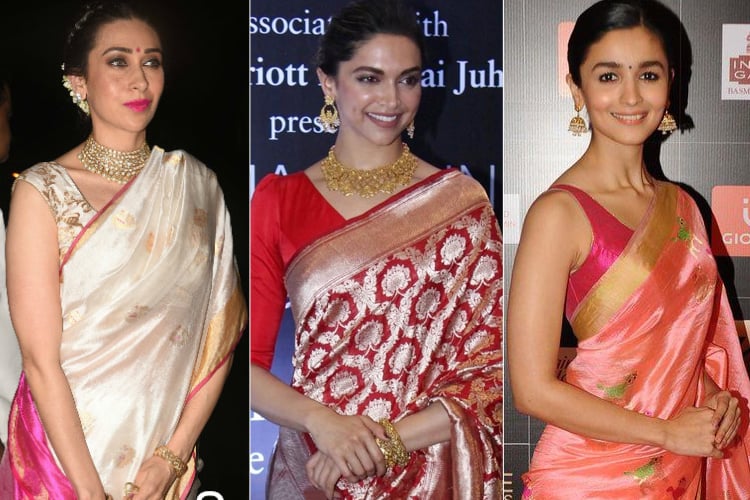 Bollywood actresses are masters of doing it both with perfection – hey can go all western in ball room gowns and switch up to get into their total desi avatar. As the year sped by giving us one fashion goal after another, here are 10 traditional looks Bollywood actress aced this year.

Now, this is not fair, Deepika. It was supposed to be Hema Malini’s book launch, the veteran actress was supposed to hog all the limelight. But we have to say, you look like lightning in the red Banarasi Silk sari by Raw Mango, blatantly stole the erstwhile Dream Girl’s thunder. The world is used to seeing the original diva of Bollywood looking like a fairy tale, but it remains a mystery how at this age she keeps reducing years from her face. The mother of two teenage daughters arrived at Ekta Kapoor’s Diwali party in a Manish Malhotra anarkali and all we think of when we look at her, we imagine nothing but tons of molten flowing gold. 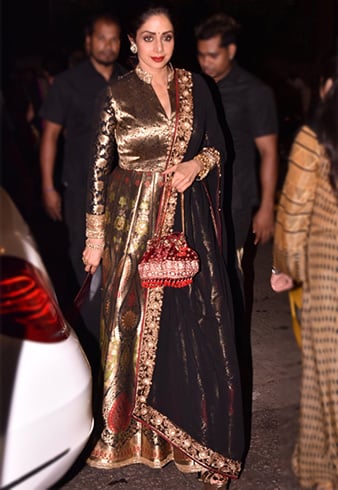 Her movie has yet to release, but Saif’s baby daughter has become quite the talk of the town, some owing to her upcoming movie, Kedarnath and some due to her sense of styling that has glimpses of Soha Ali Khan in it. Doesn’t she look like one freshly descended from the seventh heaven in this Abu Jani Sandeep Khosla Anarkali she picked to attend the Ambani’s Ganesh Chaturthi festival? Kareena’s sharara style beige outfit at Anil Kapoor’s Diwali bash was giving everyone some serious traditional garb goals. The Tarun Tahiliani creation, with its overdose of Gota patti works – not that we are complaining about it – complimented Bebo’s beauty at all the right places. Love that she kept the hair in a messy bun adorned with a dash of sindoor. The emerald jewelry contrasted the absence of color in the outfit well. 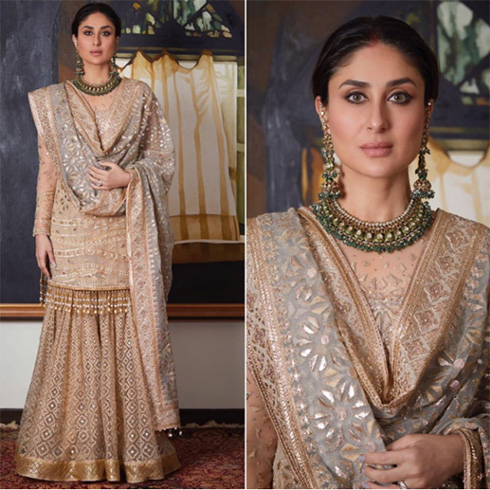 If you got a glimpse of Aishwarya Rai Bachchan at Lal Baghchya Raja this year, you clearly got darshan of Mother Lakshmi, we say. In this red Sabyasachi Sari adorned with golden embellishments by the border she was indeed an incarnation of sorts. The make-up was clear and a parted hair with a pinch of sindoor completed the look. 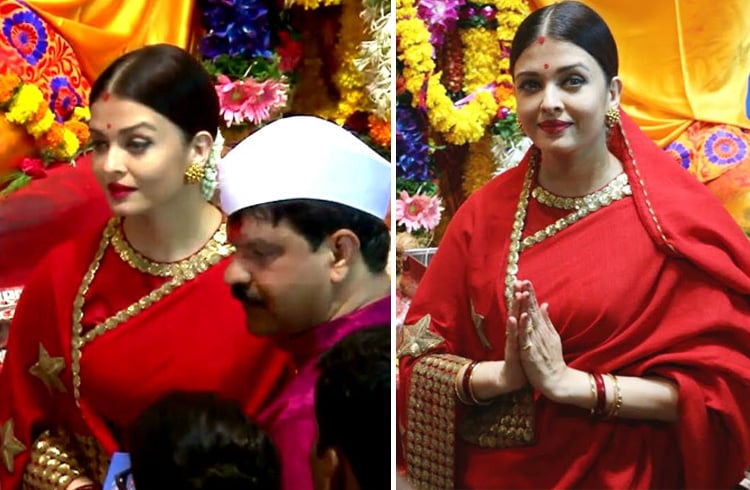 We don’t get to see Alia in sarees much, but we loved her saree draped look in 2 States. She left us in complete awe again as she walked the Rep Carpet of Zee Cine Awards this year wrapped in six yards of coral fineness. Opting for a mature appearance, the actress had her hair summed up in a bun with minimalist accessories. 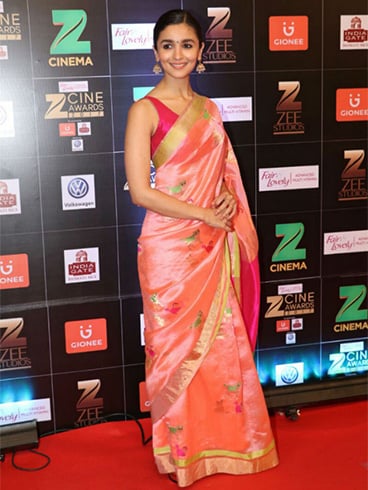 A sight to see was Karisma at Anil Kapoor’s Diwali Bash. The white brocade sari was paired with a matching blouse, and the kundan choker did the rest of the work of grabbing eyeballs. With hair braided into a gajra adorned bun, the Kapoor lady embodied simple heavenliness. 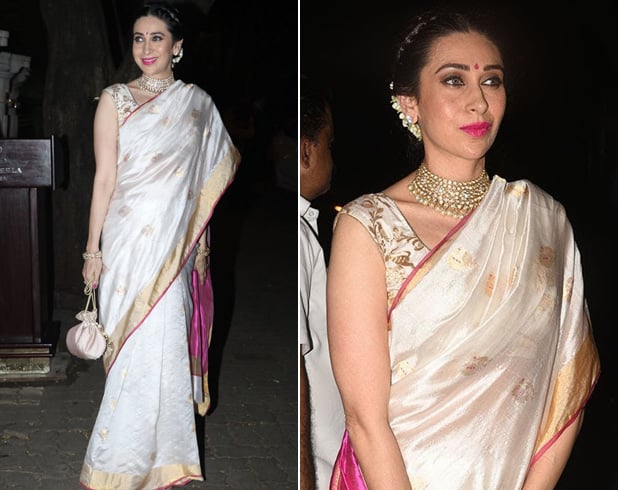 Ever since the Kal Ho Na Ho actress tied the knot with Gene Goodenough her frequenting filmy events have been on the decline. But whenever she makes an appearance she leaves us missing her even more. She walked the ramp for designer Sanjukta Dutta during Lakme Fashion Week, and tell us if she hasn’t given a whole new meaning to the quintessential red and black combo. 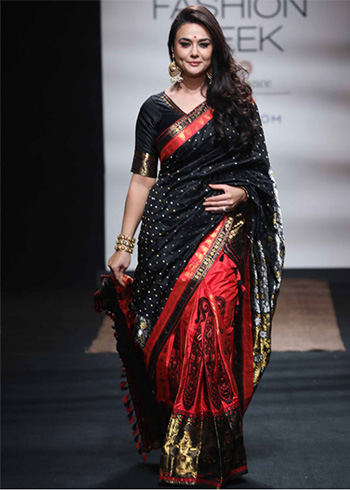 Elder sister is there for all the inspiration one may need to ace the style game, no wonder Shamita has been winning one red carpet after another day on day. We give her full marks for her modern twist to the timeless saree. The blouse needed all the attention and the very wise draping of the satin fabric made all the room needed. Though we believe she could have lost those earring that we aren’t fans of, the saree gives her extra marks. Our brand new Miss Universe is only 20 but has shown some amazing decision-making skills, one of them is the choice of this outfit. Manushi picked this white floor-length anarkali for her rendezvous with Prime Minister Narendra Modi. The outfit is not only gorgeous of a pick but speaks of class and a strong sense of “what to wear, when”. 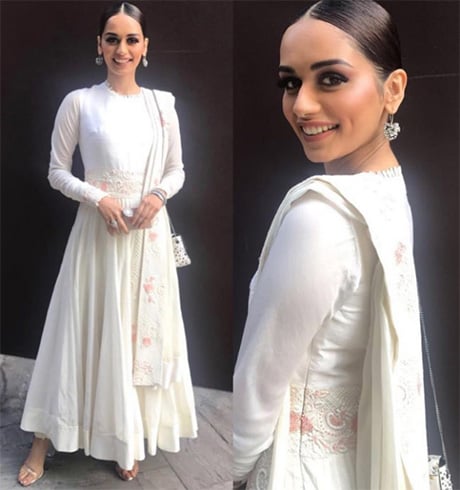 So these were our picks from all the traditional attire our queens put on this year. I am all set to get a white anarkali stitched for me – just like Manushi and hunt for a red Banarasi like Deepika’s. Do you have a favorite, as well? Would love to hear, so do sound off.

The Best Workout To Do When You Have Your Period

This 85 Year Old Super Model Will Break The Myth Of...