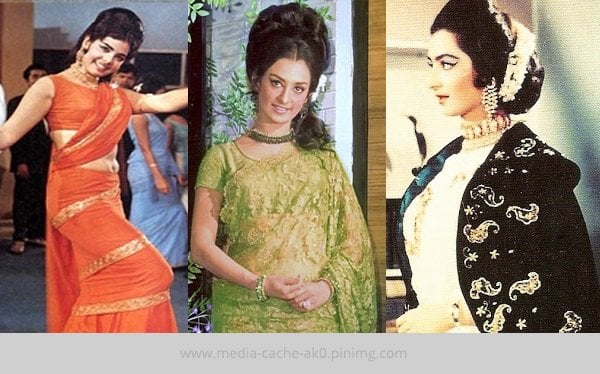 Bollywood and fashion has a long-standing relationship! They have always taken inspiration from each other.  In India, where mass is following fashion often takes its cues from cinema. Especially in India, where Bollywood has a larger-than-life presence!

The 1960’s was an era of colours not only on the Indian silver screens but in fashion too! It was about flamboyance and magnificence. The screening of Mughal-e-Azam in late 1959 marked the commencement of colours on celluloid. Bollywood actors like Mumtaz, Saira Bani, Asha Parekh, Sharmila Tagore, Dev Anand and Shashi Kapoor were seemed to have made most of the opportunity by tapping into the conscious and distinctive styling and they played major part in influencing fashion for over a decade. Then, it was considered sexy and acceptable to be a woman with curves.

Fashion Lady brings you the blend of flair and fashion that dominated sixties!

If you spot a lady in a big poofy hair and winged eyeliner, you would know that it is taken from Bollywood in sixties. It was actress Saira Banu who got the trend of hairdo and eye-make-up popular in India. She first carried it in the film “Junglee” in 1961.

‘Sadhana Cut’ was again one popular cut in 1960’s. Actress donned these fringes in her debut film “Love in Shimla” in 1960’s. The hairstyle made her style icon overnight for girls now longed to get the similar haircut.

Yesteryear actress Sadhana once again came into the limelight for her trendy style of figure hugging sleeveless churidar kurta in Yash Chopra’s film “Waqt” in 1965. The style got popular among young women all across India. These outfits were also worn by the actresses like Vyjanthimala, Asha Parekh in the films like “Jewel Thief” and “Love in Tokyo”. The style suited more on women with thin and curvaceous body.

It was in “Ram Aur Shyam” movie in 1965 when the actress Mumtaz brought saree into the fashion limelight among masses by stylishly draping it around her body. How the sarees were worn back then is still fascinating! It had its own charm. Sari became a fashionable item for the Indian women than a regular clothing. Followed the trend were many Indian actresses back then! Recently, Priyanka Chopra wore the similar style of saree draping in her film “Teri Meri Kahaani”, a part of which based in 1960’s.

The orange colour saree worn by Mumtaz in ‘Aaj Kal Tere Mere Pyar Ke Charche Har Zubaan Par’ song in 1968 film ‘Brahmachari’ became so popular. The saree was draped in a new and stylish manner that still people know it by the name of ‘Mumtaz Saree’.

It was in 60’s when the actresses went little bold in their costumes for the first time as they wore swimming costumes on the silver screen. Bollywood actresses Nutan and Tanuja first broke off the bare trend followed by Saira Banu and Sharmila Tagore by wearing one piece swimming costume in the films ‘April Fool’ and ‘An Evening in Paris’ respectively.

In The Stars: Nail Art Designs Based On Your Zodiac

Ways to Use Yogurt For Skin Care

Fashionlady - July 10, 2017 0
Any Indian meal is incomplete without a bowlful of curd. Whether taken in solid or liquid form (lassi or chach), curd is a great...