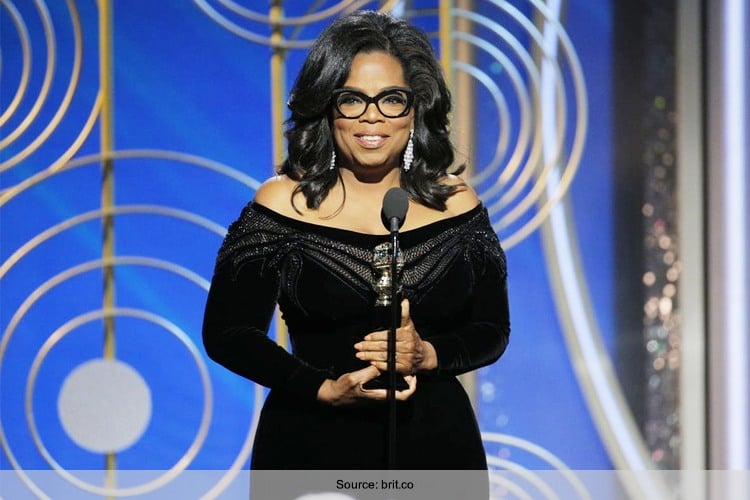 It was the Golden night where ‘BLACK’ ruled – in dress code, and in the form of ‘one’ woman, who took centre stage and left everyone speechless with her awe-inspiring speech! She is one of the two richest Black women in the world (yes, there are only 2 black ladies on the world’s richest list).

This ‘one’ woman I am talking about has been a talk show host, actress, producer, philanthropist, and all-around media heavyweight and now an inspiration for a whole generation!

She is all over the internet this very minute.

The word iconic took a larger-than-life dimension on Sunday, January 7, 2018, in Beverly Hills, California when Oprah Winfrey took the stage to accept her Cecil B. DeMille Award 2018 at the Golden Globes Awards.

Yes, the Golden Globes 2018 or the Golden Globe Cecil B. DeMille Award which is handed out to a person for truly extraordinary achievement in the entertainment industry.

What also stood out majorly and brought tears to the eyes of those present at the Cecil B. DeMille Award was the now viral Oprah Winfrey speech.

The Oprah Winfrey speech at Golden Globes 2018 was so powerful that it stirred up a speculation that this heavyweight media magnate might make a run for the White House in the year 2020.

Though Cecil B. DeMille Award winner 2018 Oprah Winfrey has denied her presence in the presidential elections, it hasn’t stopped many an observer from asking “Why not give #Oprah2020 a try?”

While accepting the Golden Globe Cecil B. DeMille Award for outstanding career achievement, Oprah Winfrey delivered a moving address in her near 10-minute speech that resonated the world over.

Excerpts of the Oprah Winfrey Golden Globes speech (keep some tissue papers in your hand, please… no more watery eyes):

“I want all the girls watching here, now, to know that a new day is on the horizon!”

The beauty of Oprah Winfrey Speech at Golden Globes 2018 was how she threaded together her personal story, the historical struggle for civil and gender rights, #metoo and a mood of optimism ahead.

Here is an interesting capture of the historical Oprah Winfrey speech at Golden Globes 2018 after Oprah Winfrey was introduced on stage by Reese Witherspoon.

Taking the stage, Oprah Winfrey discussed race, gender, and the fight for equality. She narrated Recy Taylor’s fight for justice, “For too long, women have not been heard or believed if they dare speak the truth to the power of those men…But their time is up. Their time’s up. And I just hope—I just hope that Recy Taylor died knowing that her truth, like the truth of so many other women who were tormented in those years, and even now tormented, goes marching on.” Winfrey said, bringing the audience to its feet.

The speech struck a chord with people all over the globe and took the world of social media by storm! It effortlessly echoed the voices of the oppressed and hoped for the beginning of the end of abuse. Oprah Winfrey has yet again carved her niche in the global history of women’s liberation. Kudos to her and three cheers for women power!

So ladies and gentlemen, how did you find the powerful Oprah Winfrey speech at Golden Globes 2018? Moving? Tearful? Inspiring? Or all of these? Don’t forget to write your comments below.

Unveil 6 Fashionable Burqa Designs You Can Opt For

10 Indian Women Scientists Who Have Made Our Nation Proud

Fashionlady - February 28, 2019 0
National Science Day and International Women’s Day is coming up, and there is no better way than to take a moment to honor these...