It is July and we know that you are eagerly waiting for the magazines to hit the stands. Before you get your hands on them, take a sneak peek here at what each magazine cover has in store this month and decide your take.

The Daenerys Targaryen of the Game of Thrones recently revealed the romantic sweet side of hers in the movie ‘Me Before you’ and she extended it to the cover of Harper’s Bazaar, UK.

On the cover, she perched on a beach chair in a romantic pink embellished Christian Dior gown. David Slijper, the photographer captured the blue-eyed actress beautifully in a blue backdrop.

She posed sensuously in an ivory colored Christian Dior outfit with jewelry from the same label.

We fell in love with this color blocking outfit from Dior that she donned. With a youthful spirit, she stole our hearts right away.

Swaying from a ladder, she flaunted her toned legs in a striking black outfit.

The pretty English lady expresses her love for dressing up and shares a lot more about her fashion sense and the Harper’s shoot. Click here to know her thoughts better-

The in-demand super-hot model, Bella Hadid, who delivered a breathtaking shoot for Elle last month, cast her spell this July on the cover of L’Officiel magazine.

On the cover, the glamour girl was pictured in a beach party theme. She donned a color blocking bodysuit by Peter Pilotto over which she draped a lovely sea green Roberto Cavalli skirt. In big beach style De Grisogono earrings, she looked smoking hot.

In another picture, she was seen sporting a blue leather high neck top, over pleated maxi skirt from dsquared2. The thigh high slit gave her ample space to flaunt her pins. She remained loyal to the De Grisogono earrings and wore maroon suede high heels. With hair pulled up into a ponytail, she sat stylishly on the boundary wall.

We are greatly fascinated by the way L’Officiel styles their magazine title.

On the cover, she chose to stretch herself in a red and white striped sweater. With volume added hair, glowing skin and sparkling smile, she threw us off the board. 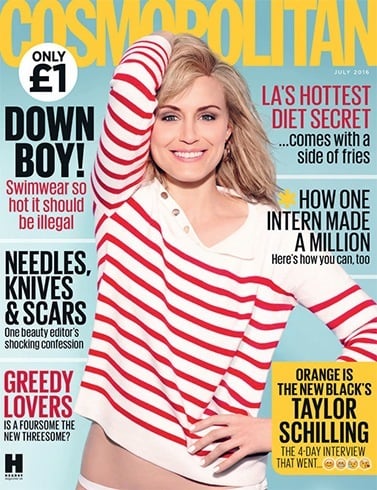 In the entire shoot, we can see her in subtle shades of pink, lazing around. 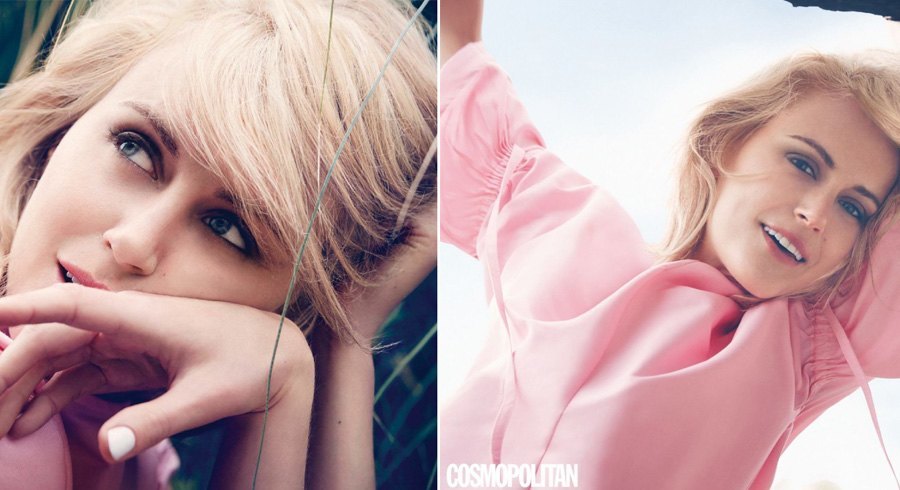 Glamour picked the right star to support their July cover- ‘Women are as strong as hell’ edition. Serena Williams, the unbeatable Tennis star brought forth a striking counterpart of herself on the cover.

She sported a white Wolford bodysuit and posed with a sliding off-white Virgil Abloh jacket. With big hoop earrings and windswept curls, she looked fierce and gorgeous. 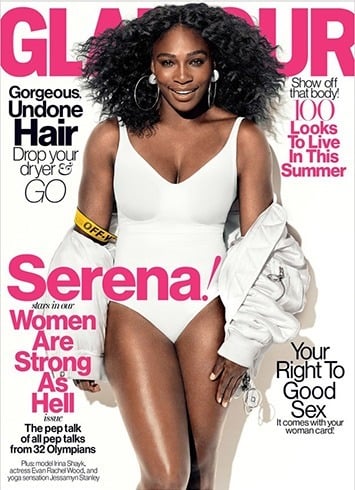 She grooved and sizzled in a Burberry dress. 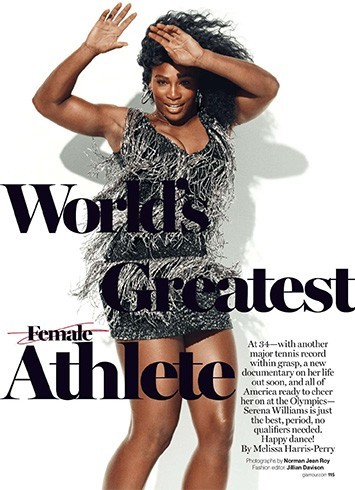 Looks like the sports star loves to dance, as most of her postures show the groovy angle of hers. In a Norma Kamali fringe top and shorts, Maiyet earrings and dewy makeup, she looked happy with herself. 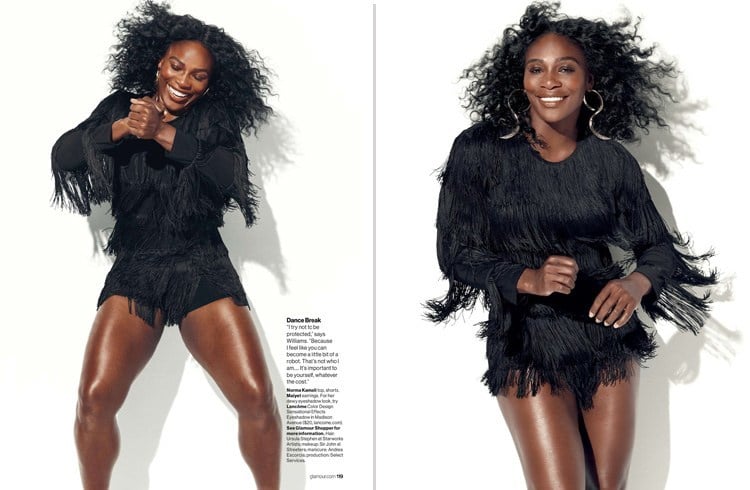 Her well-toned figure looks tremendous in a Fleur Du Mal bodysuit and the metallic fringe belt by Azzedine Alaia. 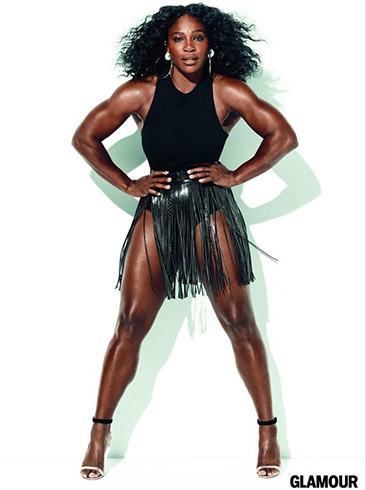 The Hunger Games leading star made her way onto the cover of Harper’s Bazaar, China in a black peep through outfit. She looked extremely sexy despite the close neck, full sleeved outfit. The cover photo suggests that skin show isn’t important to cast your sensuousness.

Ghostbusters Stars on Elle, US

Elle for their Women in Comedy issue chose the rocking, hilarious stars of Ghostbusters, which is much awaited movie.

You might know the stars featuring in the movie obviously – it’s Melissa McCarthy, Kate Mckinnon, Kristen Wiig, Leslie Jones. Here are the pictures:

On the cover photo, she was styled in a jade colored blouse and skirt by Prabal Gurung, sapphire earrings by Martin Katz and bracelets by Kimberly McDonald. 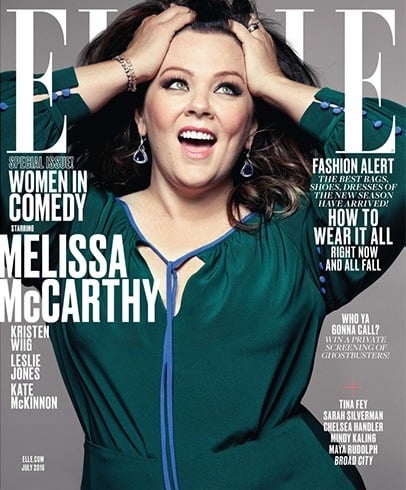 In one of the inside pictures, she was seen happy and delightful in a Versace dress, De Grisogono earrings and Brian Atwood pumps. 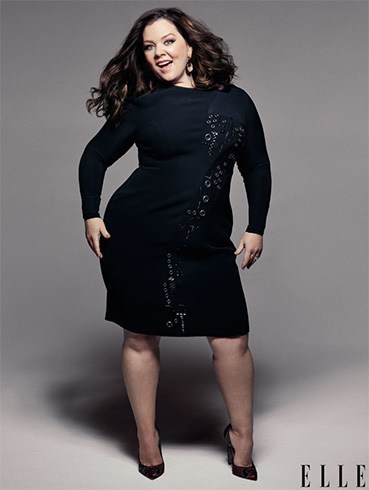 On the cover, the lovely lady dressed like a shining star in a gown by Sophie Theallet, Chopard earrings and Stuart Weitzman sandals. In one of the inside pictures, she was spotted looking fabulous in a Dolce & Gabbana floral dress, Pomellato bracelet and earrings and another bracelet from John Hardy. Interesting was her all spikes hairstyle. 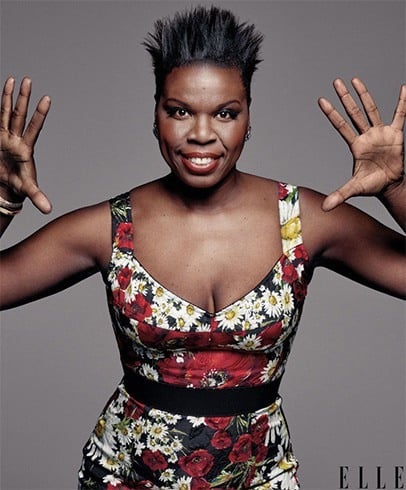 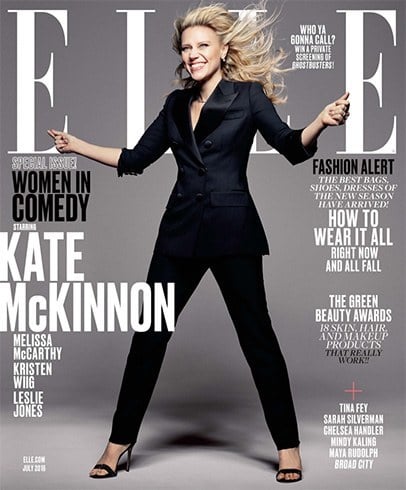 Inside photo fashion credits go to Calvin Klein for the fur coat and Chanel for the earrings. 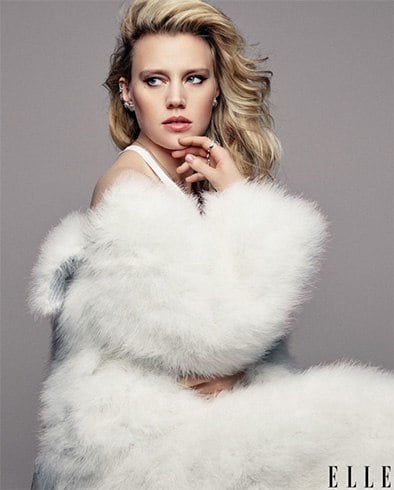 On the cover, Kristen was styled elegantly in Marc Jacobs jacket and trousers, Chopard earrings and Ana Khouri ring. 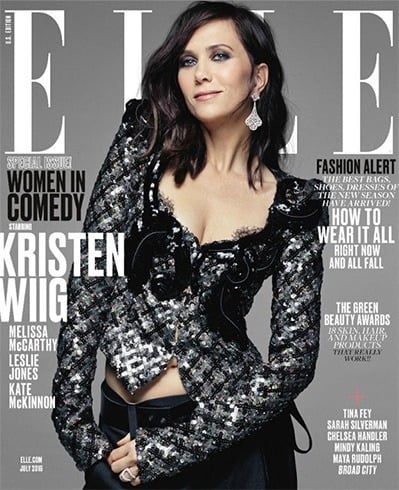 In another picture, she was seen rocking a Miu Miu shirt, Araks bra, Harry Winston earrings, necklace and rings, and boots by Giuseppe Zanotti design. 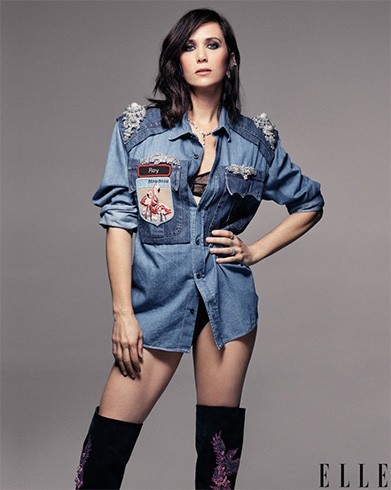 All credits go to Samira Nasr, the stylist for delivering the best of the best.

Our Goddess of fashion, Victoria Beckham graced the cover of Vogue, Korea, the usual classy and elegant way.

On the cover, she decked up in a high-neck coat from Dior. The photographer Hyea W. Kang captured the chiseled features and razor sharp jawline beautifully on the cover. The brunette gave herself an iconic bob look by tucking her hair inside her coat. 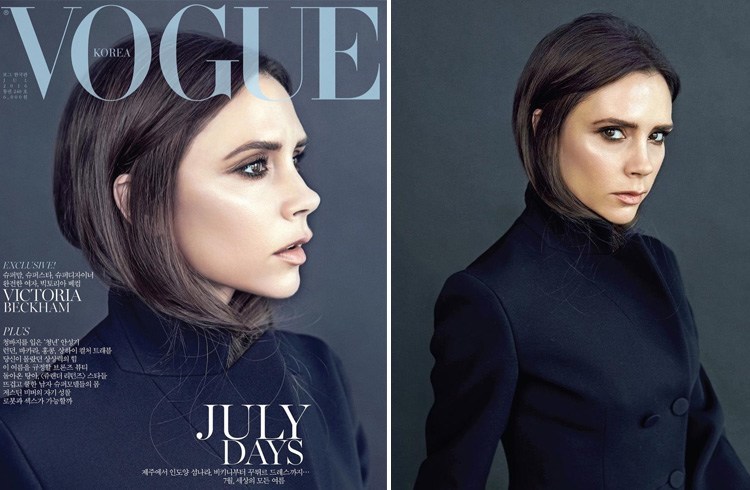 She stood tall and strong in a royal pant suit, all geared up to take over the world. 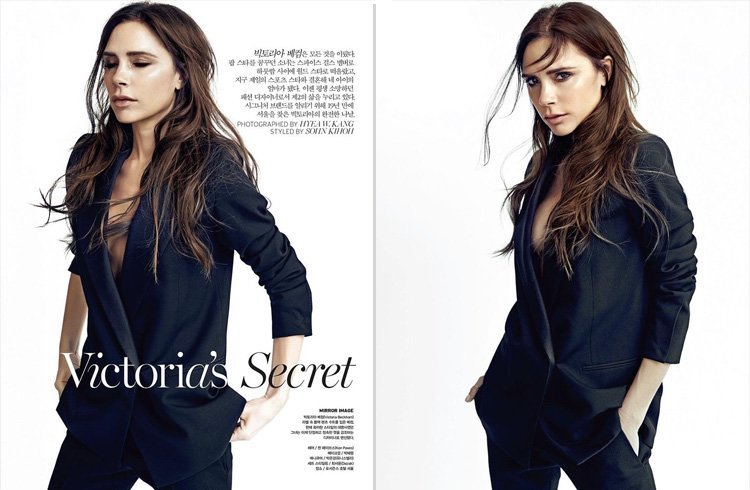 She lazes and gazes in a sleeveless turtleneck top. 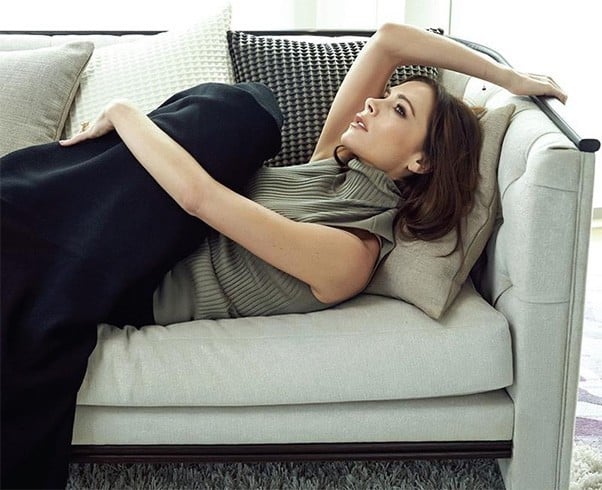 She was clicked sitting cross-legged on the floor, focused and strong in a white rib-knit turtleneck and flouncy skirt from Valentino. Kihoh Sohn, the stylist did an amazing job on her for the picture. 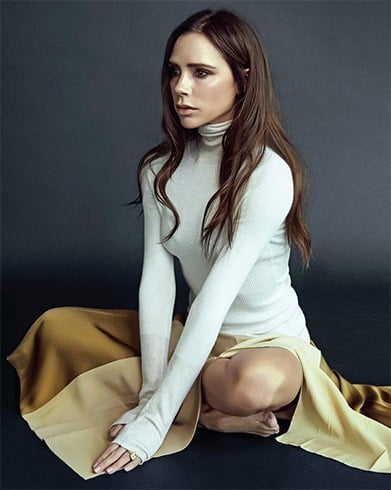 She was clicked up close and personal in a lace-trimmed top from Celine. The hair and makeup artists have done an exceptional good job on the designer, Victoria Beckham. With a tinge of gold in the bronzer, she spilled radiance everywhere. 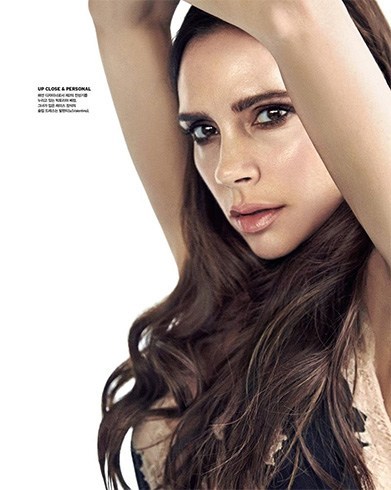 Over the lace trimmed top from Celine, she added wide legged maroon pants from Dior and stunned us all. 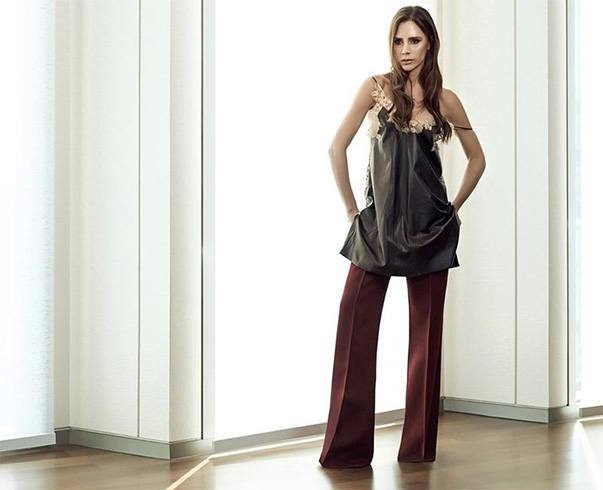 Hope you enjoyed the post!! We have made up our minds on which magazine would go home with us. What about you?

3 Ways to Make a Gel Blush at Home

Have You Ever Tried Using Listerine For Hair? Find Out All...

What To Wear To The Homecoming Party