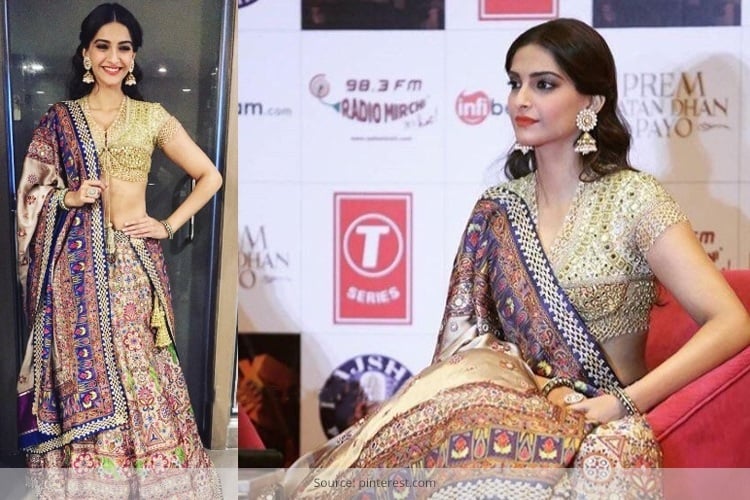 Sonam Kapoor has a flair for drama and we all know it. When we say drama, we don’t for a second mean that she’s dramatic in the drag queen sense or the typical Bollywood actresses who throw temper tantrums.

What we mean when we say drama is – she likes to dress up, she likes to pay attention to details, she likes to look good, and most importantly, she LOVES giving importance to such things. As shallow as it may seem to a stranger, all this makes her feel good and as a result, she generates those happy vibes! We can see it in her smile, you know?

Anyway, what we are really trying to say here is – Sonam Kapoor gets happiness from little things in life. One example is dressing up or rather dolling herself up, according to the events.

Now that she’s been promoting Prem Ratan Dhan Payo, she’s dressing herself in character and looks gorgeous at every single event!

For the music launch, she wore a gorgeous lehenga choli outfit that came from the house of Abu Jaani and Sandeep Khosla.

This regal lehenga of hers was teamed with huge jhumkis from Amrapali and a very appropriate hairdo. As usual, her makeup was flawless!

What’s Under Your Clothes?

Let Your Little Girl Rock n’ Roll With These 4 Partywear...