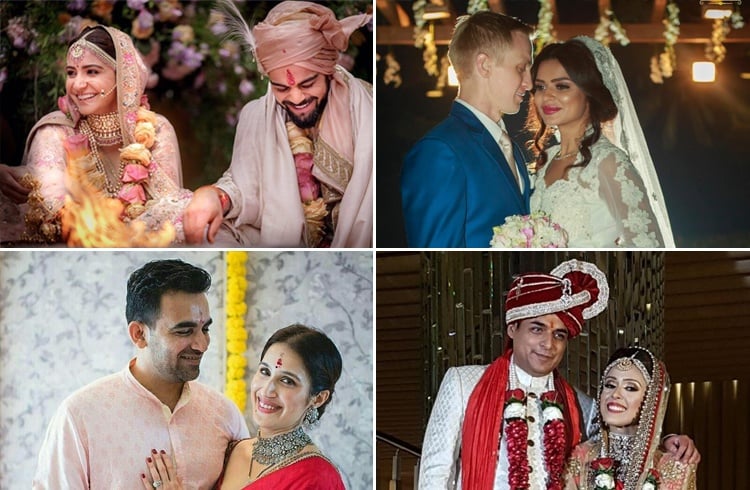 While Bharti’s wedding was well informed of, Anushka’s came in as a surprise. And then there were Sowmya Seth and Ria Sen too, who joined the Newlyweds’ club this year. Every wedding follows that one basic question – how was the bride looking, what was she wearing, so let’s take a quick look at the styling of our B-town beauties – shall we?

Bengali actress who has been seen in many Hindi movies and music videos tied the knot in a very private ceremony this year. She kept her look very traditional. For the ritual of haldi, Riya was seen draped in a cotton handloom saree while for the wedding she picked the quintessential piece in every bong diva’s wedding closet – the red Banarasi. She also wore the white mukut during the ceremony and looked like the sabeki bride everyone falls in love with.

The queen of laughter had all the functions of her wedding documented. As she shared every little detail with her fans, we too accompanied her through her outfit fittings to jewelry shopping. With the help of ace designer Neeta Lulla, Bharti made herself this unique and one of its kind ensemble. The pink lehenga was adorned with images of several brides with beaded shehnais crafted into it. The blue blouse provided a pleasant contrast. For the reception, the bride opted for a western look and picked a mid-night blue gown by the designer.

Sowmya is a household name for viewers of Indian television and her wedding was a delight for everyone. For her Punjabi wedding, she picked a red lehenga-choli; while the lehenga was embellished heavily with gold work, while the blouse was decorated mildly. She completed the look with rich gold jewelry and a generous number of churas.

Another traditional look came in from Pooja Banerjee who went safe with red. By now brides across India have known – when in doubt, go red on your wedding. We are loving the contrast created by the emerald droppings on her diamond necklace over the red.

In a simple and private ceremony, eminent TV actress Kavita Kaushik tied the knot. Instead of star-studded wedding in the presence of all her industry friends, Kavita settled for a temple ceremony in the peaceful locales of Uttaranchal. Her attire and make-up were kept as simple as could be, but her natural glow couldn’t be contained.

It was after a very long time that we heard something about Hrishita Bhatt, and it was certainly a great news. As pictures of the actress clad in her wedding finery started making rounds of the interwebs, we realized the actress of has finally taken the plunge. Hrishita appeared nothing less of a princess in her crimson lehenga that she teamed with a golden dupatta. The kundan and emerald jewelry rounded up the look for her.

The VJ come actress was our favorite since the days of Hip Hip Hurray, so the announcement of her wedding came as a wonderful surprise. The Parsi bride looked stunning in her blush pink wedding gown with an added dupatta in the same shade. Blessed with peach and milk skin, the very stunning Nauheed kept her make up simple but managed to look a million bucks.

She played the girlfriend of a cricketer in her most renowned movie and her real life too gave her the opportunity to marry one. Sagarika and Zahir’s wedding became the talk of the town and the function was attended by the who’s who of both the fraternities. The bride was dressed tastefully for all the occasions making it a little tough for us to decide if we love her Sabyasachi saree more or the lehenga from in beige?

After winning our hearts in a dance show the ‘English Babu – Desi Mem’ jodi finally tied the knot this December. The wedding was attended by Brent’s parents and sister who flew in all the way from America. The couple had two ceremonies – for the white wedding, Aashka wore her mother-in-law’s wedding gown and for the desi Gujarati wedding, she donned the prettiest lehenga in gold and maroon. She didn’t shy away from hoarding up on gold jewelry either – just the Gujarati way.

News of this wedding – we can call it wedding of the 21st century also – broke out just 2 days from the D-day and left fans heartbroken that their Actress-Cricketer lovebirds were tying the knot in a far-off country, but the adorable pics from Anushka and Virat’s destination wedding had the fans melted in a minute. Anushka, looking like an angel in Sabyasachi creation and jewelry, kept the makeup natural and fresh. For the engagement, she had picked a velvet saree and for the reception, a red Banarasi number from Sabyasachi was picked up. She looked mesmerizing in each of her avatars.

We cannot stop staring at these 10 lucky brides looking exquisite in their special attire. It is impossible for us to pick a favorite look, but do let us know if you have a chosen one while we sign off wishing them all the happiness on earth.

Here’s How You Can Avoid Gaining Weight During Ramzan

90’s Snap Hair Clips Are Back In Action!

Causes Of Hip Pain In Women And Simple Healing Approaches