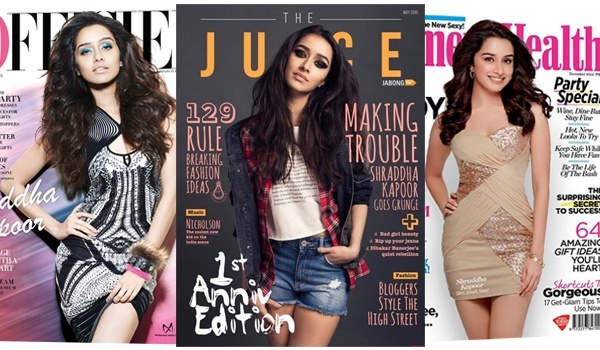 This time again, we are back with more celebrity covers published in the September 2014 issue all over the world. From a super model of Indian origin becoming a face for Burberry campaign, Shahid Kapoor flaunting his avatar to international actresses raging on the top fashion magazine covers of the world. Here is the report.

Prior to the release of her film ‘Khoobsurat’, Sonam Kapoor is flaunting her new style on the cover of Vogue this month. She is wearing a dress from Louis Vuitton’s Fall 2014 collection.

She quoted in the magazine.

I’m not rebellious. But I am who I am. I like to speak the way I speak and wear what I like to wear.

Neelam Gill, the 19 years old model, has already treaded on the footsteps of international Indian models like Lakshmi Menon and Ujjwala Raut as she is emerging as a rising star on the block. In the September 2013, she debuted on the runway for Burberry’s spring/summer 14 collection at the London Fashion Week and have been appeared in the fashion editorials for Vogue Italia. Neelam Gill has also been appointed to become the face of Burberry for its beauty as well as fashion campaigns! A way to go for this potential super model, and Elle India gave her immense support by highlighting her on the magazine’s cover.

The Bollywood actor is all set for his new film release ‘Haider’ in October and for now his fans are happy with his dashing beard look. GQ India has featured Shahid Kapoor’s new handsome avatar on its cover. The ‘Haider’ actor is wearing a burgundy sweater and a pin striped jacket, take from a look from Gucci’s pre fall 2014 collection. The September issue of GQ India is worth juicing up with reading!

Deepika Padukone is the new power girl in the tinsel town. With back to back hits and critics appreciation, the actress has proved herself once again! She is currently busy with the promotions of her next film ‘Finding Fanny’. While she does that, Femina India chose her for its September cover, themed on the ‘Most Powerful Women’. For the cover shoot, the actress is wearing white shirt dress with a light make up, which has been styled by Shaleena Nathani.

The ‘Aashiqui’ girl, Shraddha Kapoor has millions of hearts vying for her, which makes a most popular choice on the cover pages of Indian magazines. For the September month, not only a popular fashion magazine ‘Harper Bazaar’ but a most read film magazine ‘Filmfare’ too chose her to be featured on their covers. ‘The Young, Fresh and Fabulous’ as Shraddha Kapoor is described in the Harper Bazaar magazine, she has made to experiment with a new sophisticated look. On the cover, she is wearing a Valentino three tone dress from its fall 2014 collection. Her look is deglamourized, as we said experimented, with a light make-up and hair.

Here is some International magazine’s reports –

Nicole Kidman in The Edit (UK)

The 47 year old Hollywood actress, Nicole Kidman, is the most obvious choice for cover in UK’s The Edit magazine. The ‘Grace of Monaco’s’ Australian actress has got candid about her marriage to Keith Urban as well as of tits and bits of life, which she now calls happy! The actress has had her highs and lows during her film career and success, which she talked about in the magazine’s cover interview. Nicole Kidman has opened up about planning to leave Hollywood to live with the family.

She told to the magazine –

US’ Wonderland headed for a mean act by dedicating its cover to the actresses of 2004 teen flick ‘Mean Girls’. Yes, the reason we see two popular actresses Lindsay Lohan and Stacy Martin on its cover. However, the magazine also features the films two other actresses i.e. Barbara Palvin and Saoirse Ronan on separate covers. The magazine has used the film’s one of the popular lines for the Lindsay Lohan’s cover.

I can’t help that I am so popular.

You can’t sit with us.

After spending her days in rehab, the actress is all set to play a lead female in ‘Speed-the-Plow’, which is the remake of David Mamet’s critically acclaimed 1998 play.

The other popular actress of ‘Mean Girls’, Stacy Martin has become fashion ‘It’ girl after she has been chose for the Ukraine’s Harper Bazaar cover. For the cover, she is donning Louis Vuitton.

The ‘twilight’ star is a popular face in the US and the France, after she appeared on the covers of both the magazine in a single month.

In an interview with US’ Elle, she said –

Now I feel like if I smiled for a paparazzi photo—not that I ever would—that’s exactly what people would be desecrating me for. They’d be like, ‘now you’re going to give it up, now you’re a sellout.’ like, okay. What do you want? What would you like?”

The day the movie came out there was a picture of me—in the New York Post, I think. I was sitting on my front porch, smoking a pipe with my ex-boyfriend and dog. And I was like, Oh shit, well, I have to be aware of that.

US’ Interview is under spotlight after it featured the mega six celebrities on its separate covers for the September 2014 issue, themed on fashion and film. Nicole Kidman, Keira Knightley, Naomi Campbell, Amber Valetta, Daria Werbowy and Lea Seydoux, all six have been photographed by the industry’s top creative photographers.

Kardashian’s younger sister, who is already talk of the town in the fashion industry, finally debuted on the cover in the ‘Teen Vogue’s September issue. This is Kendell’s first Vogue cover. However, the model was also featured in a French Vogue’s May spread. She has also appeared in a Love magazine’s cover.

Two back to back covers in the September 2014 month itself, the super model is certainly seems to be a popular face among the international magazines. Her first cover is for the US’ Interview magazine, which we had already talked about. For Harper Bazaar, Naomi Campbell is wearing Givenchy.

The 33 years old actress, Jessica Alba, is on the Marie Claire’s UK and Australia’s cover editions. The ‘Sin City’ actress is wearing Louis Vuitton for the UK’ Marie Claire’s cover. In the cover interview, she talks about her mind on having crossed 30.

She told to Marie Claire UK about her past role –

I don’t know if I was ever typecast, I just made very safe, boring choices as an actor and I take full responsibility for that. It wasn’t the roles it was probably the way I translated them. I was afraid to be fearless and bold. I was young, I was afraid of being criticized, and I wanted to appease everyone.

There’s much more diversity now; there’s a wider range of successful actresses and beauty. We didn’t have Tina Fey and Amy Poehler starring in movies when I was starting out. Halle Berry wasn’t an Oscar winner and there was no Jennifer Lopez.

The actress has also been chosen for US’ Maxim cover for this month.

Julia Roberts for US’ Instyle Magazine

‘Pretty Woman’ is on the Instyle’s cover for the September issue, officially celebrating the magazine’s 20th anniversary. This is the actress’ sixth appearance on the magazine’s cover. Julia Roberts is wearing Louis Vuitton dress, belt and necklace.

Lady Gaga in US’ Harper Bazaar

For the September’s cover, Harper Bazaar has exclusively brought a conversation of Lady Gaga with the designer Karl Lagerfeld. In the interview, the pop sensation had talked about her fashionable pets, personal style and her new friendship with Tony Bennett.

Here are some of the more interesting celebrity covers for the September month.

So, which one is you’re most favourite cover of the September 2014 month?