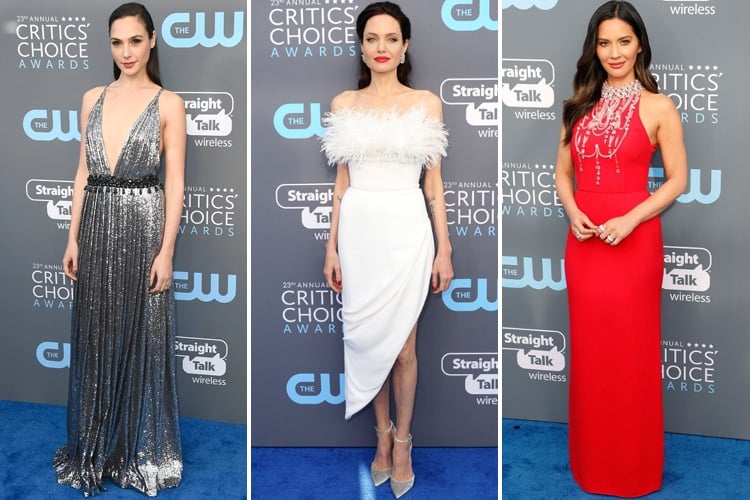 So after wearing black for the Golden Globes, the celebs were ready to play with some color. The 23rd Annual Critics’ Choice Awards held at Barker Hangar in Santa Monica played host to the bigwigs of Hollywood sporting fashion as unexpected as the show itself.

The first actress on our list of best-dressed celebs to walk the red carpet this evening is Sarah Hyland who picked a Naeem Khan creation to show up as the most glamorous ballerina we’ve ever seen in this dazzling black bodysuit teamed with a white tutu skirt. The 27-year-old also brought in a pinch of Audrey Hepburn vibes with her sparkling diamond stud earrings. We love that the look was neatly wrapped up in a perfect bun hairstyle.

Our favorite star from the Big Bang Theory, Kaley Cuoco, was seen glowing in this angelic light pink semi-sheer sequin gown that featured a breathtaking plunge. With her hair arranged in simple waves, the actress maintained that it was her dress that grabbed all the attention. With jewelry to the minimum, she looked like a dream that we don’t wanna wake up from.

At 42, Angelina was a stunner in her white strapless pencil dress by Ralph & Russo. The ostrich feathers bodice gave way to an interesting and unique asymmetrical hemline. We’re getting major old glam Marilyn Monroe vibes from her white dress that she paired with silver pointy shoes. The make-up was fresh with bold red lips while statement earrings made for the perfect piece of accessories.

And a statement is exactly what the actress from Game of Thrones made at the Critics’ Choice Awards which made for one of our favorite looks of the season. Looking timeless in the black polka dotted with metallic studs and to match this Dolce & Gabbana sheath black dress she picked a pair of barely there strappy heels. The make-up was kept fresh with nude colors stating what the power of simplicity looks like.

So we found this ageless beauty twinning with Emily and we leave the decision of ‘Who Wore it Better’ to you. Reese seems to have chopped off two whole decades from her age in this little black dress from Prada. A pair of dangling earrings, furry heels and a heart-winning smile rounded off the look.

Jessica Biel brought her A-game to the fashion of the Award’s night and seemed to play the devil’s advocate in this red and black sheer gown with bold patterns and glam waves. The Oscar de la Renta tulle dress was left to be the star of the show. The pair of chandelier earrings added a little bling. A pair of single straps and a red clutch completed the look.

Superwoman Gal Gadot arrived at the event looking like a supernatural goddess in a sizzling Prada gown in silver. The deep ‘V’ of the gown adorned with silver sequins and a criss-cross back featured dense pleats and a decorative belt with dangling fringes. Her make-up was transparent, a little bronzer highlighted her cheekbones and with minimal accessories and poker straight hair parted at the side, she let her dress be the star of the show.

We saw the teen icon in a mature attire, her Giambattista Valli dress in lilac certainly added a couple of years to the look, but made for a good change also. The gown with long bell sleeves had embellishments at the bust but we are not sure if that was a little extra on the Victorian styled number featuring a high ruffled neck. Yara kept the make-up simple and swept her hair in a bun.

We had to take a second look at the actress from The Infiltrators who looked inimitably tall and classy in her floor-length dress from Vera Wang. Those sleeves or an extension – if you will – hanging by her arm, giving an illusion of off-shoulder, deserve an award for their own self. The blond bob arranged in beachy waves contributed toward the clean no-make-up look.

Either Manage Your College Stress Or Gain Extra Weight

Top 5 Fringe Bags for the Boho Look that Add Luxury

Why do Women Have so Many Shoes – Part 1