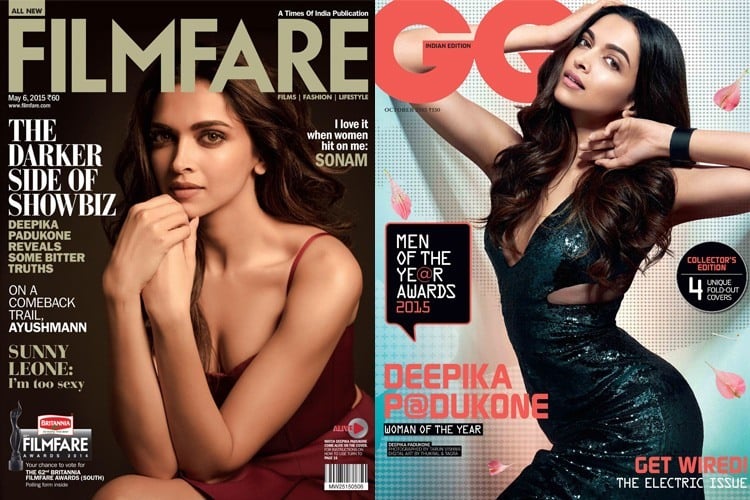 In swimwear or seeti-marne wali saree, in business suit or bikini, DP and her hot bod are things one rarely comes across in the Hindi film industry.

She might have romanced Ranveer (we will not count how many times on and off-screen) to Shah Rukh off and on, but Deepika Padukone magazine cover is something that’s here to stay for a long time.

Don’t you need to clap for us since we have brought you the very latest issue of Filmfare magazine featuring Deepika Padukone who won the Best Actress award for her role in film Piku?

Not only does this Bajirao Mastani girl look super glamorous on the magazine covers page, her dangling earrings make her an oomph figure.

Her essentials, her style, her secrets all decoded in this Deepika Padukone photoshoot for magazine. Her Tod’s shirt, Turquoise and Gold Bottoms and diamond and emerald necklace make her look truly smashing.

Dressed in just a white Christian Dior jacket and nothing else, and with metallic blue eye shadow as the only fashion complement, does Dippy look the golden girl or a mermaid?

The only dark side am going to reveal about Deepika Padukone in this GQ cover is that she is drop-dead gorgeous. She looks every bit bold and seductive in this magazine covers page.

Considering her super hot looks and body, Deepika Padukone can rock a swimsuit as easily as a farsi pajama. She is dressed up in a cut-out suit in ‘80s pin-up pose making her truly hot. 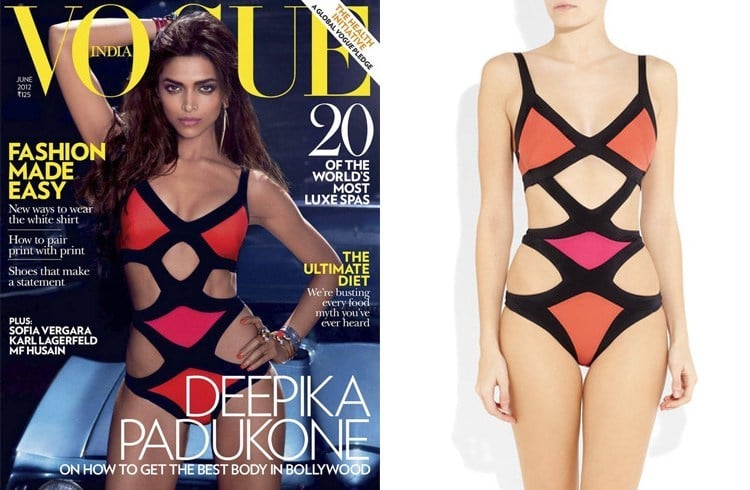 Dressed in Gucci, Deepika Padukone rocks on this white magazine covers page that has a tinge of coral.

What do you like most – the hot pink cover featuring Deepika Padukone photoshoot for magazine Vogue or her hot butts? This magazine covers page is based on Burberry Spring 2011.

Catch the edgy looking deepika padukone in Grazia issue of Feb 2011. The picture shown on the left side is Azara by Alpana & Neeraj and the center one is Morphe By Amit Agarwal.

God, Deepika Padukone looks so romantic in this Spring 2009 Dolce and Gabbana floral gown. The dress version has been worn earlier on by Diana Penty on the cover of L’Officiel India March 2009 issue. Don’t you think it’s somewhat disappointing seeing a leading fashion magazine use a design already seen before? What are your views on this?

Let us know which outfit of hers you liked most.

Bad Hair Habits – Do Not Do These Things To Your...

Discover How To Create Crimped Hairstyle

MAMI 2017 Was Fashion and Wits In One Frame

Fashionlady - January 12, 2017 0
The world of Bollywood always inspires us with their fashion, their accomplishments, and their high spirits. We grasp every bit of the drama, gossip...