It was the TV stars big night! It was the 70th edition of Primetime Emmy Awards 2018 night at the Microsoft Theater in L.A and the red carpet styles of the celebs didn’t fail to impress us like always. While there were some standout fashion moments, there were also few fashion misses. But today, we bring to you what we think are the best fashion statements quoted at the Emmys red carpet and let you be the judge of the fashion parade. 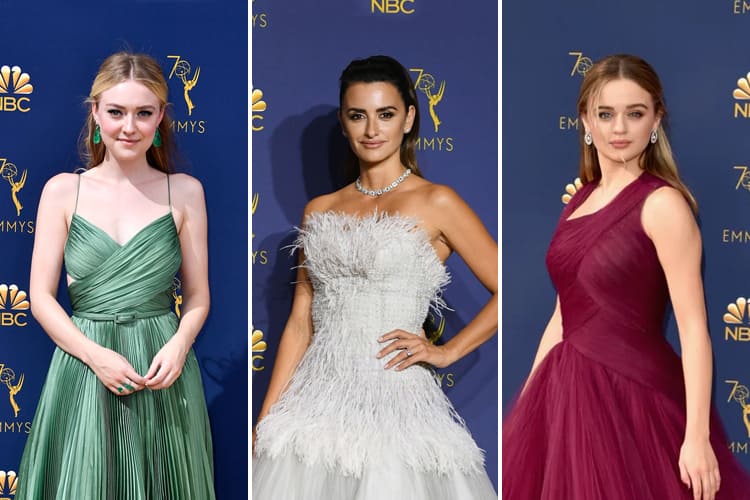 The Best Dressed Celebrities at the Emmy Awards 2018:

The executive producer of the series ‘Sinner’ looked fab and drop-dead gorgeous in a strapless Ralph & Russo ruffled gown at the Emmy Awards 2018. Her soft waves hairdo added a touch of romance to her style. Adorning platinum jewelry by Harry Winston, she rounded her sparkly style. 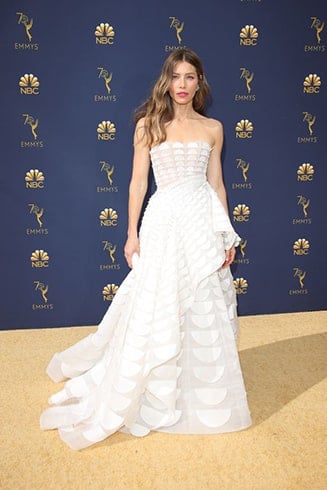 Square necklines ae rare to spot and Kristen Bell did perfect justice to this pattern in a sleek, body-con Solace London gown in white. With diamond drop earrings, she looked all glittery and elegant. 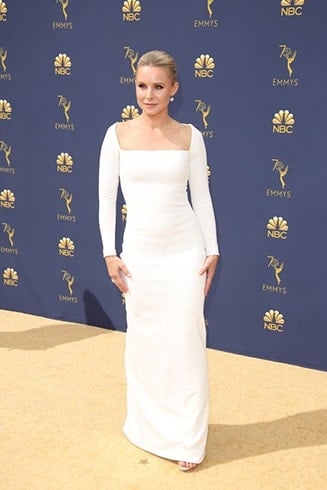 ‘The Seven Seconds’ star, Regina King went neon for the Emmy Awards 2018 and oh we loved it! She donned a curve grazing outfit by Christian Siriano and paired with a stiffly done ponytail. 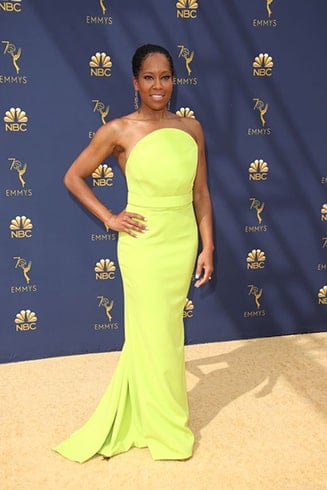 Red, velvet and satin make for a deadly combination and the ‘Killing Eve’ actor, Sandra Oh nailed a style in it at the Primetime Emmy Awards 2018. She rocked a plunging neckline Ralph & Russo gown in red hue with curls rolling down till her shoulders. The stone work along the waistline, neckline and sleeves dramatized the style. 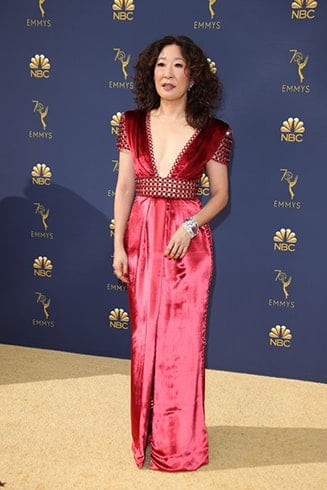 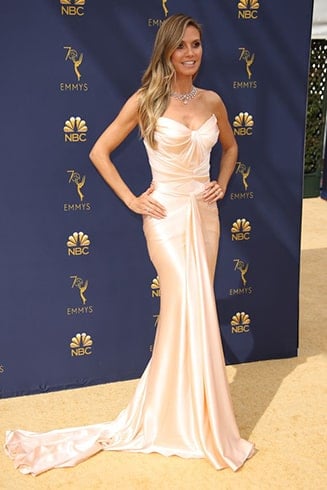 Looks like Samira Wiley added the much needed glitz to the Awards event. She gleamed and glittered in a silver Jenny Packham dress that had an extra sequin bling along the sleeve and shoulder line. A gold toned clutch, sparkling drop earrings and sleek updo rounded her style. 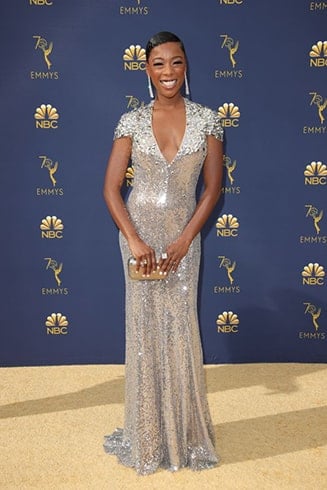 While many celebs opted for sequined styles, Thandie Newton of the ‘Westworld’ series opted for a shocking pink hue. She looked elegant and chic in a one-shoulder, floor length column gown and coupled it with jewels from Harry Winston. 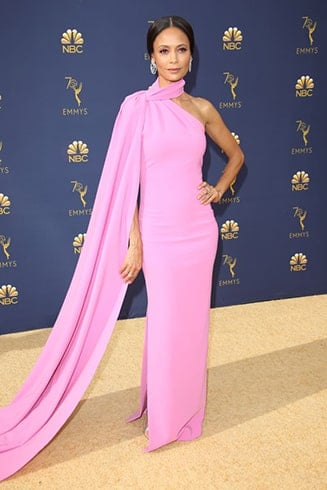 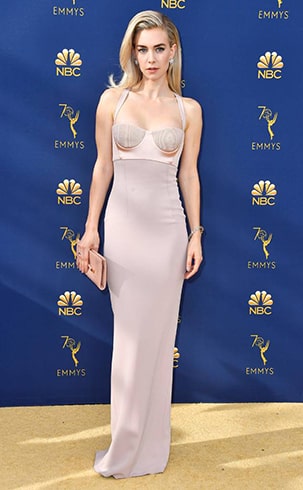 Issa Rae chose to go trendy and upbeat with her style at Emmy Awards 2018. In a powder blue Vera Wang outfit that clubbed pants and an embellished floor length top, she looked absolutely stunning. Keeping her tresses tied up neatly, she rounded her style. 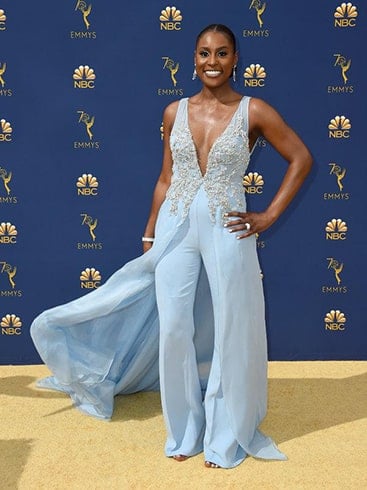 Another diva who rocked the shocking pink hue at the Emmy Awards 2018 was Tracee Ellis Ross. She nailed the overwhelming, dramatic, oversized sleeves ball gown by Valentino. She picked a matching lip hue and a neon orange eye makeup to round off her style. 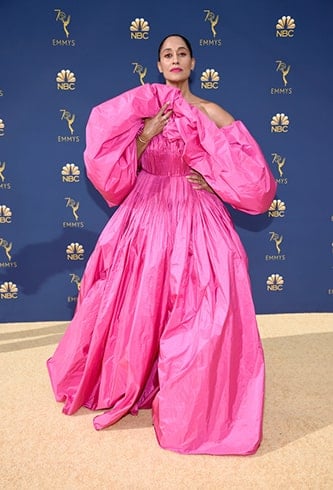 Another neon style that marveled us was showcased by Tatiana Maslany. She donned a Christian Siriano halter neck top that had a cape-like detail on one shoulder along with sleek black pants. With multicolored shimmering pumps, she added an edgy feel to her style. Love the coral lips on her and her series of earrings!

It was a glittery night for Allison Janney in a shimmering purplish pink Prabal Gurung gown. With matching clutch and strappy heels, she looked like a perfect glittering star. 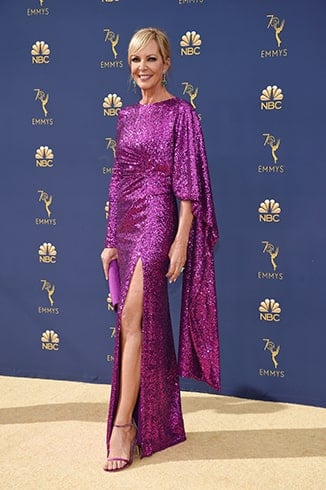 Another Prabal Gurung style that marveled the audience on the red carpet of Emmy Awards 2018 was rendered by Tiffany Haddish. She looked glamorous in a multicolored Prabal Gurung gown that was inspired by the Eritrean flag in honor of her heritage. This style surely brought pops of color to the red carpet, don’t you think? 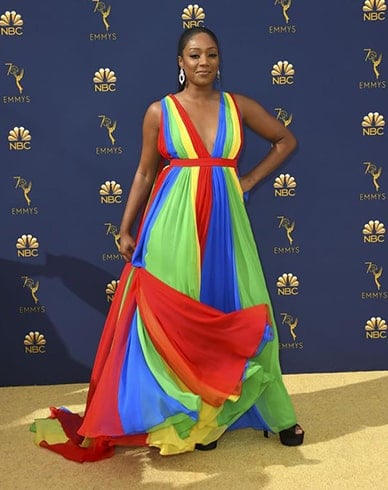 It was beads, feathers and silk tulle in gray and white by Chanel was Penelope Cruz’s choice of style for the Emmy Awards 2018. Adding glittering jewels, and with glowing makeup, she was a sight to sore eyes. 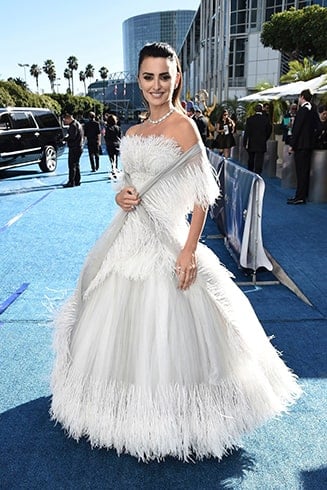 Unlike other divas who went whimsical with their styles, Felicity Huffman chose to go the elegant way with a black pantsuit. The diva chose to keep it simple but classy with silver clutch and gold layered necklaces. 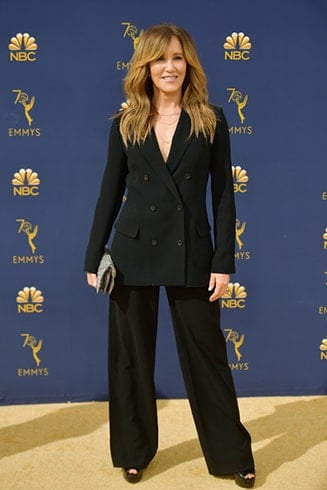 Dakota Fanning rocked the olive green outfit by Dior at the Emmy Awards 2018 The spaghetti straps and a delicate tiny belt, and her emerald drop earrings from Lorraine Schwartz enhanced the beauty of her outfit and herself. Looks like Joey King walked straight out of a fairytale into the Emmy Awards 2018. She looked drop-dead gorgeous in a maroon Zac Posen flowing gown. The asymmetric neckline, sparkling baubles and the half pinned tresses drew out a beautiful look on her. 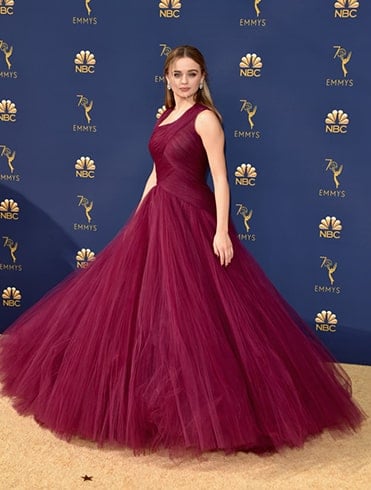 So get a bit chatty readers and share with us who according to you aces the best dressed list of Emmy Awards 2018.

Mistakes That Are Making Us Look Fat

Different Ways To Style Skirts And Sweaters During Winter

Marissa Mayer Corporate Fashion and Guide to Her Office Dressing

Stars on the Ramp: Showstoppers at IIJW 2014

Fashionlady - July 21, 2014 0
Sure they are Bollywood celebrities, but some of India’s finest jewelers and designers were behind their dazzling appearance on ramp at the recently concluded...