Indian Fashion Blog
Home Events British Fashion Awards 2016 – Whatever Is The Best In The Fashion... As British Vogue took home a spectacular custom-made trophy at the extravagant Fashion Awards, Gigi Hadid bagged the winning title for International Model Award presented by Donatella Versace. Could it get any more exciting? The Royal Albert hall was glistening with models, designers and the who’s who of the fashion world in the evening of December 5th and we got you all the tea you need.

Super model Naomi Campbell was seen in a black lace gown by Alexander Mc Queen. The sheer dress allowed us a satisfying view of her hot bod against an underlay of opaque leotard in black. 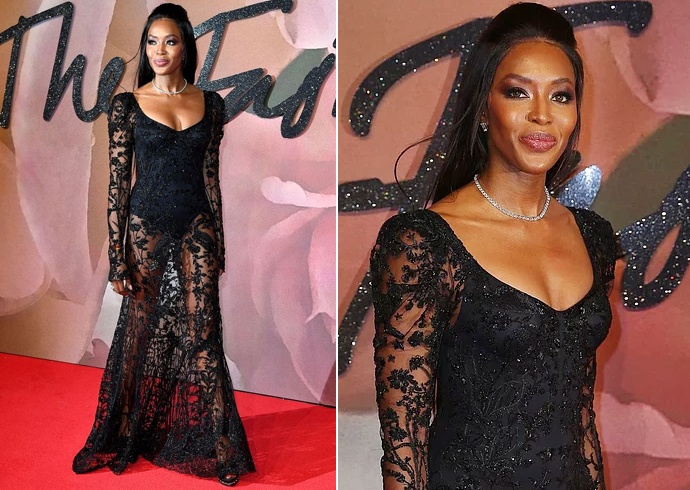 Winner Gigi Hadid walked in in an Atelier Versace sculpted jumpsuit. She must have employed an entire village to fit into the complicacies of the custom-made dress, but who would complaint as the 21 year old looks a million bucks amidst all the complications. 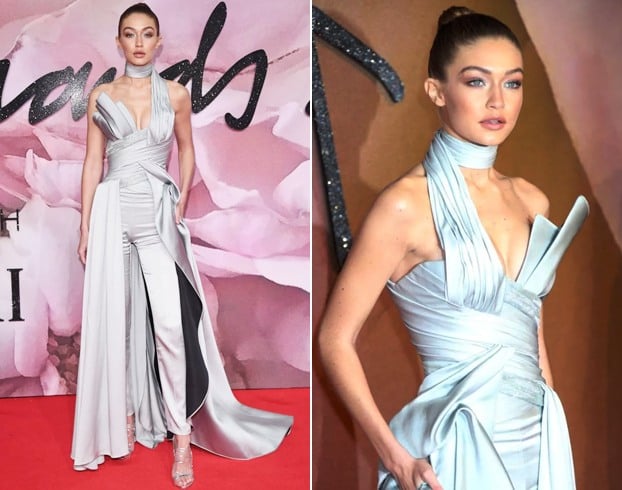 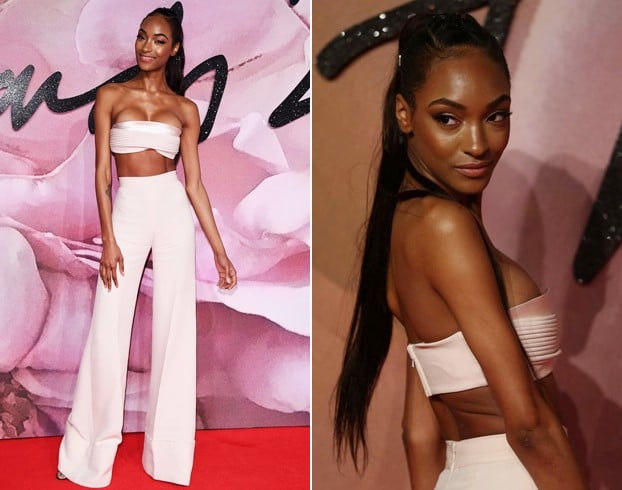 Founder of the British luxury shoe and accessories brand, Charlotte Olympia, Charlotte Dellal marked her attendance at the festive evening of the British Fashion Awards in a spectacular Zac Posen strapless gown in the magical shade of crimson. It took only a heartbeat for us to fall in love with her Old Hollywood vibe. Another fantastic show by Alexander McQueen was draped over the super stunning Jean Campbell. The crème racy number that danged on her petite body though a pair of sim strings was unarguably the most adorable piece of clothing one would have seen the entire event. We are not sure if we love the signature necklace or are gushing over the mile long blonde manes more. A Molly Godard fluffy gown was Adwoa Aboah wardrobe choice for the evening. Okay people, can we just talk – if everyone comes to an event all flawless, we are left with almost no space for criticism. So, we aren’t really mad at the 24 years old British model for giving this green piece a chance to see the red carpet. 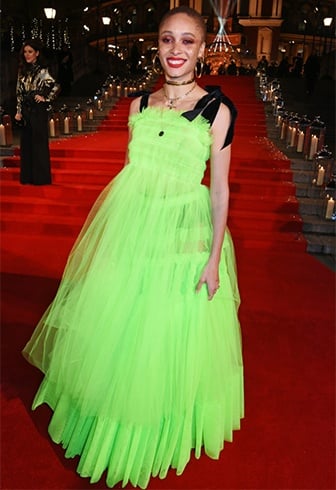 She might be just 33 but Alexa Chung has spent quite a lifetime in the unforgiving world of modelling, and so she knows better than to make any fashion mistakes. Her matching trouser and shirt from Prada was another manifestation of her knowledge of the industry. The black piping of the shirt is adding a bit of character of the off-white ensemble. The fringes at the trousers looks interesting too.

A black pant suit by Alexandre Vauthier was Aymeline Valade fashion choice for the evening. But what has caught our sight is her fishnet top. We are sure, she didn’t try taking that jacket off during the event – Thank God its December. 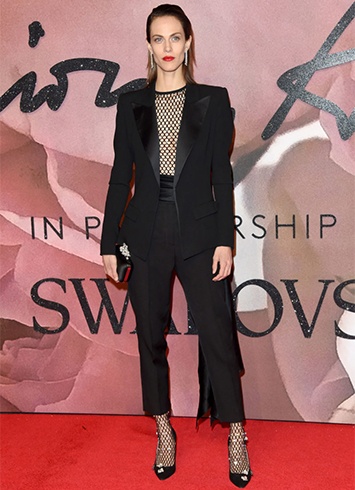 A little black dress has to make an appearance at all occasions. The night of fashion awards saw Amber Valleta in the loveliest little black dress sowed by Saint Laurent. The tiny dress had a plunging neckline and secured itself at the model’s waist with a solid leather belt. Actress Annabelle Wallis was classy in floral Alexander McQueen short dress in black. The ruffling of the design is every enticing an effortlessly reduces 5 years from the English actress’s age. 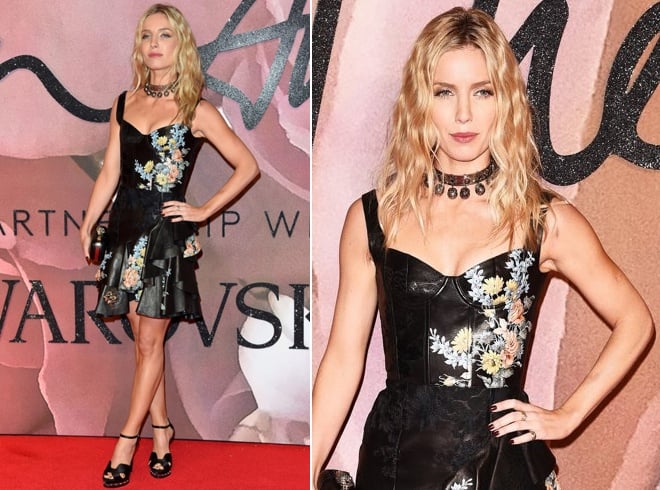 I am surprised that despite having a long trail of supermodels on our list, our special pick today is Salma Hayek in the most elegant gown seen throughout the evening. The purple Gucci creation in silk featured some ruffled sleeves and a thigh high slit. The floral pattern is one to die for, and add the actress’s killer cleavage to the entire look. 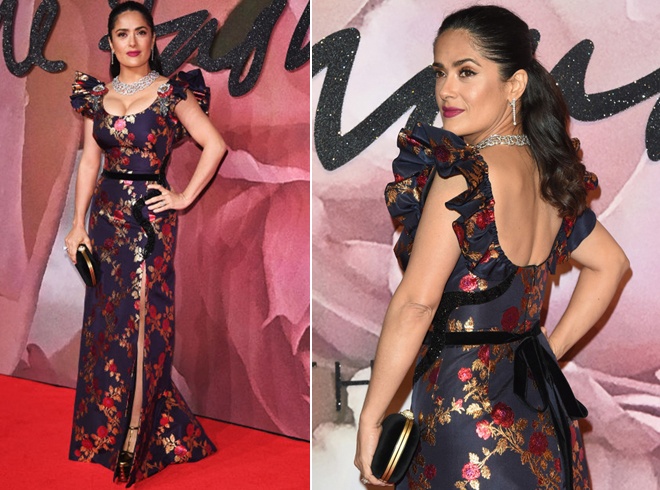 We were also left impressed by the golden Roksanda gown Erin O’Conner wore for the occasion. Though the cut of the skirt was a little off-beat, the strokes of black on the golden canvas made-up for the awkwardness. 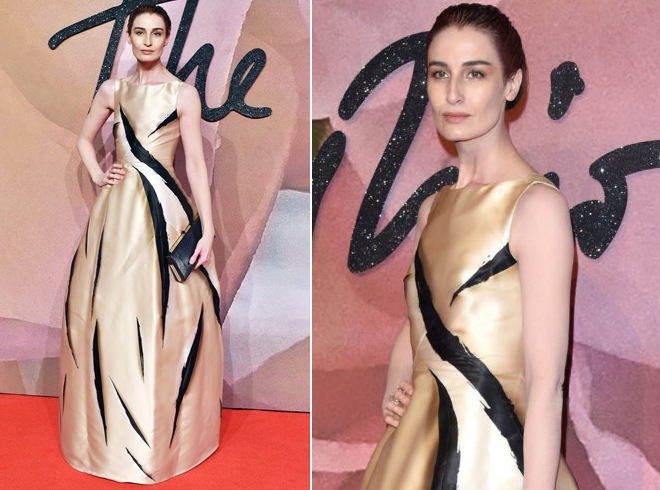 Famous for her editorial photoshoots, model Daisy Lowe was vibrant in her hot pink Antonio Berardi jumpsuit. Though the British model is known for the sizzling sex appeal, she brought teen-like freshness to this event and we just couldn’t take our eyes off of her. The matching smile is totally doing it for her, isn’t it? 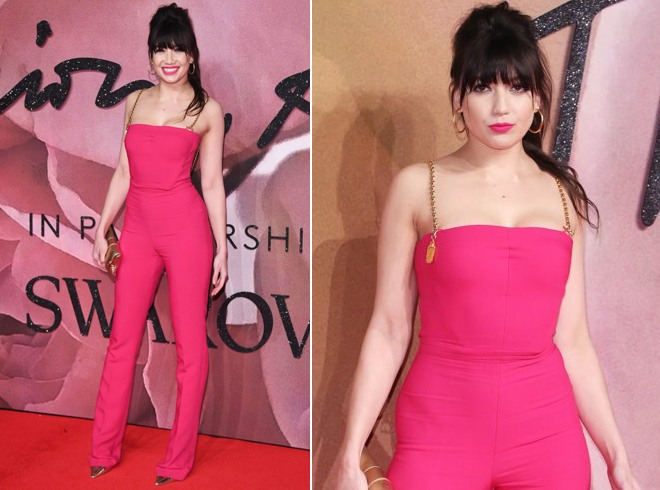 Karlie Kloss arrived in a Stella McCartney cut out gown embellished with custom Swarovski crystals. The Atelier Swarovski jewellery she wore to complete the look marks some a deft decision

The heavy weight and prestigious awards aside, the evening certainly celebrated the most cherished trends in the business of fashion. Right from the winners, nominees to the audience, people brought their best looks to the evening, and we couldn’t be more thankful for this glam.

How To Wear Overalls In Unique Ways

Bollywood Magazine Covers November 2018 Are Here To Inspire You!

Fashionlady - December 6, 2016 0
The Star Screen Awards which was held in Mumbai on Dec 4th saw Bollywood celebrities, dolled up and looking glam. Let’s do a complete...