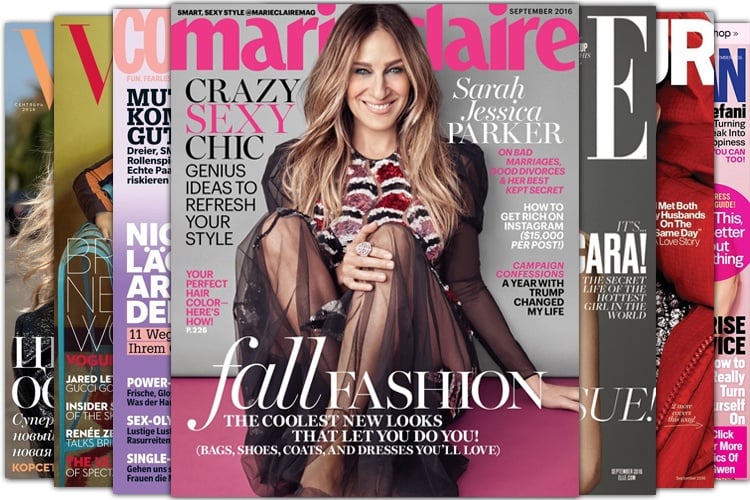 Another month has passed by, kind of swiftly, don’t you think? And here we are again eagerly on the watch-out for the stunning magazine covers hitting the newsstands, like always.
Read along to take a sneak at the most alluring covers of September 2016 to decide on which magazines should go home with you.

[Also Read: Check Out The Charismatic Magazine Covers Of August 2016]

The life and light of Sex and the City, starred on the cover of Marie Claire magazine for the September 2016 edition. She was captured looking joyous by Michelangelo Di Battista on the cover dolled up in a Gucci dress. With flawless makeup and ruffled her, she looked ravishing. 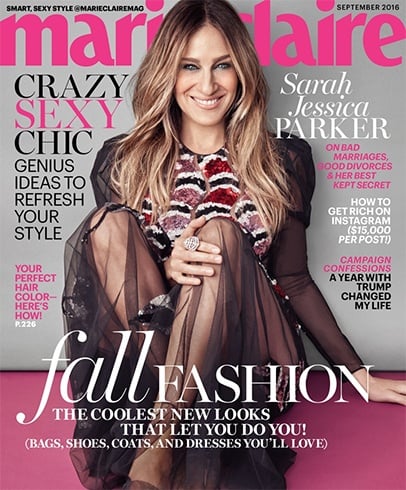 Here are two more looks from the shoot. 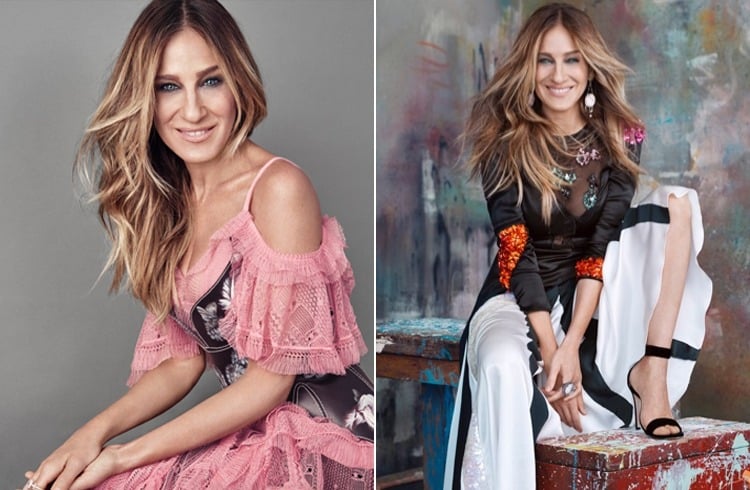 Cara Delevingne For Elle, US

The English model and actress, Cara Delevingne featured on the Elle magazine September 2016 edition looking dazzling in a sequin embellished one shouldered dress, an ear climber and glazing belt from Saint Laurent. With side swept blonde tresses, rich red lips and smokey eyes, she was hypnotic. 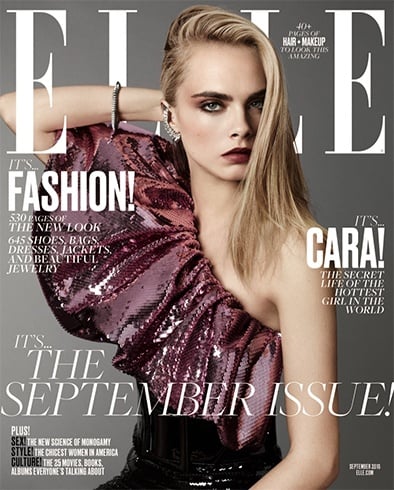 Check out the bold looks of the diva captured by Terry Tsilois.

The ladylike, successful businesswoman, Jessica Alba landed on the Allure magazine September edition with her uncommon beauty and simplicity. She can be seen on the cover in a satin and lace dress by Stella McCartney, Jennifer Meyer earrings and Ariana Boussard-Reifel bracelets. With neatly braided and pinned hair and bronzed look, she was a sight of charm. 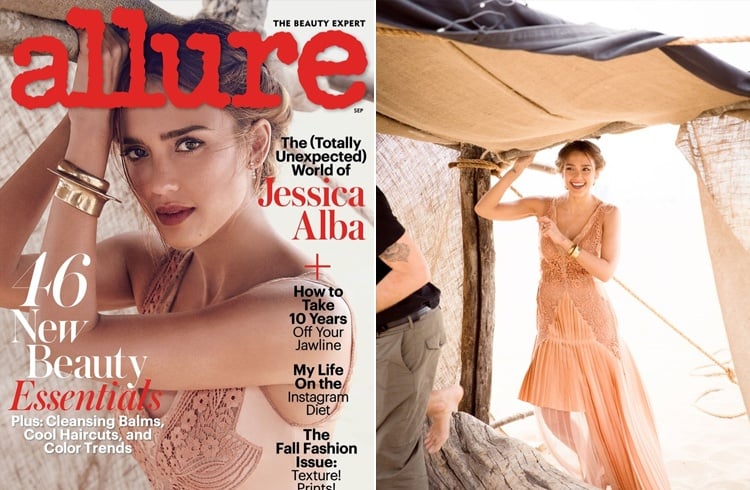 L – In a cashmere coat by Calvin Klein, silk slip by Marc Jacobs and Leigh Miller earrings
C – In wool coat by Polo Ralph Lauren, top and shorts by Blumarine and A Peace Treaty earrings
R – In a silk coat by The Row, dress by Pringle of Scotland and H&M earrings 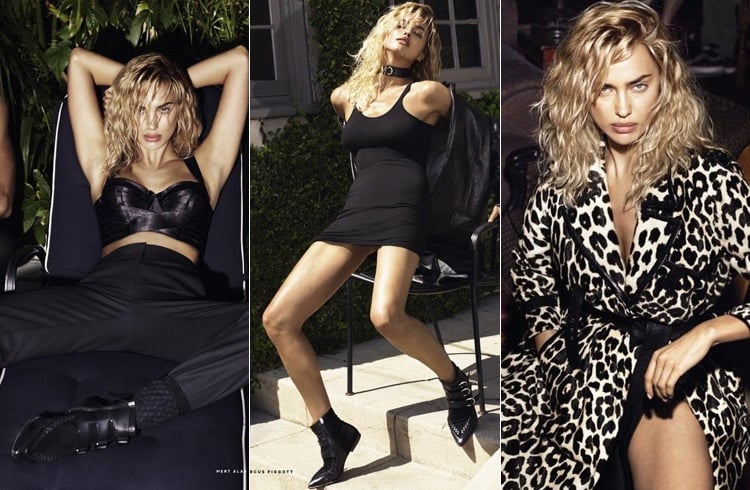 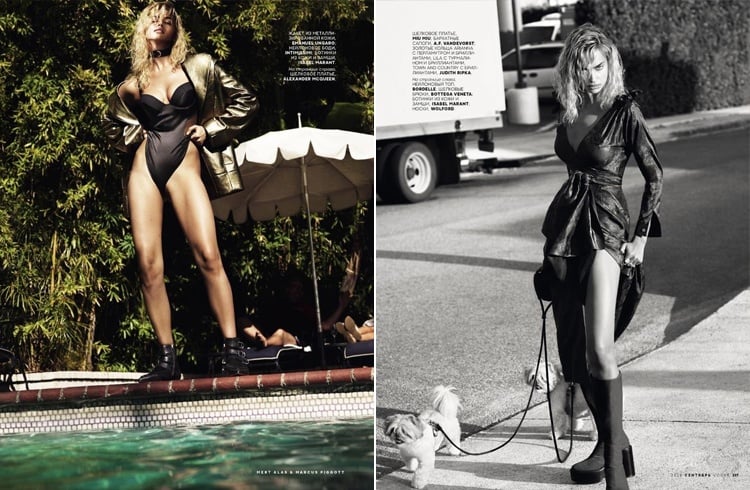 We are pleasantly surprised that the Aussies have chosen the sweet voiced beauty Selena Gomez as their cover girl for the September edition. On the cover, the rock star sits easy, comfortable and stylish in a Louis Vuitton bold colored outfit. 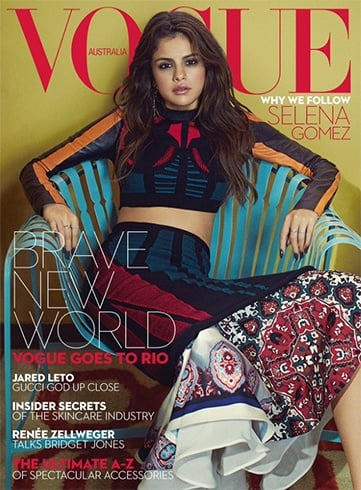 Here is one more sweet and innocent look of the lovely lady. 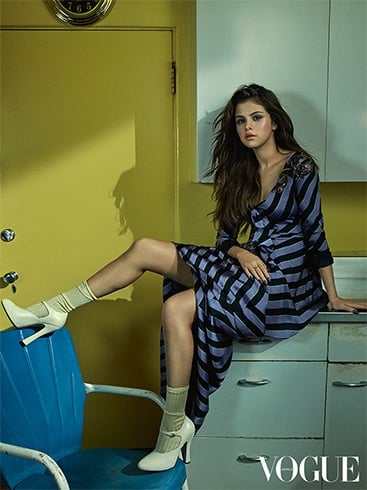 Imagining Rihanna as the last warrior woman on earth in a dark, dystopian state of environment, the stylist Edward Enninful and photographer Steven Klein brought an epic magazine cover for our perusal.

For the cover, the bad-ass beauty sparkled in Cartier tiara, earrings and necklace. 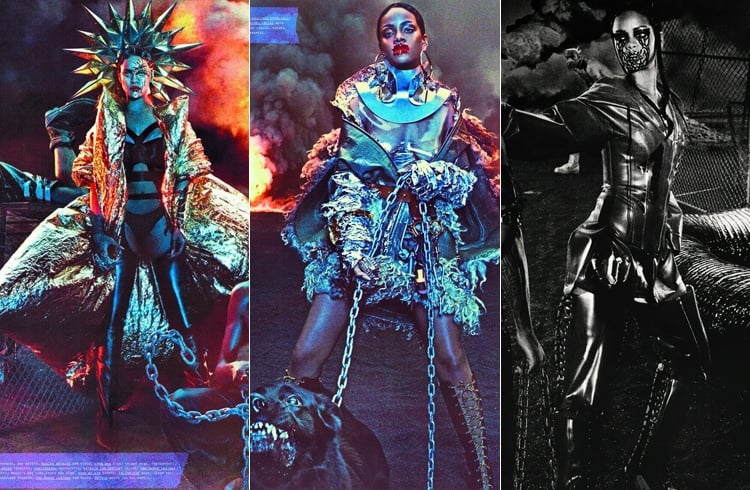 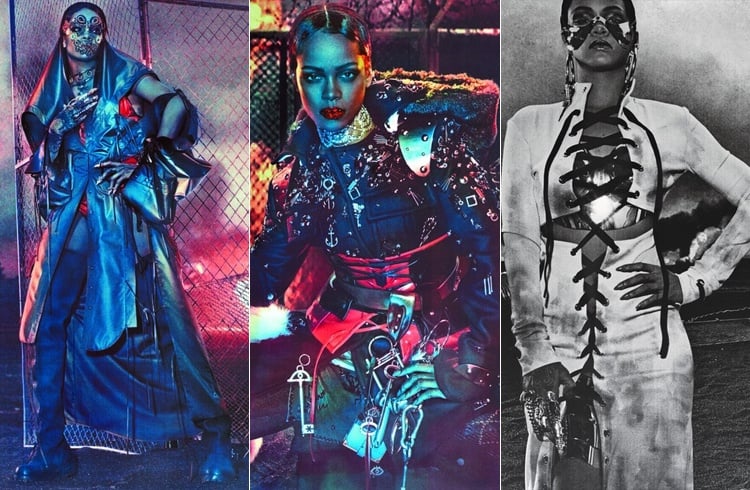 Kendall Jenner For Vogue, US

The 20 year old supermodel graced the cover of Vogue this September and spiked up the heat of the magazine. In heavily golden embroidered Gucci pant suit with pink ribbons, she rocked a sensuous look. 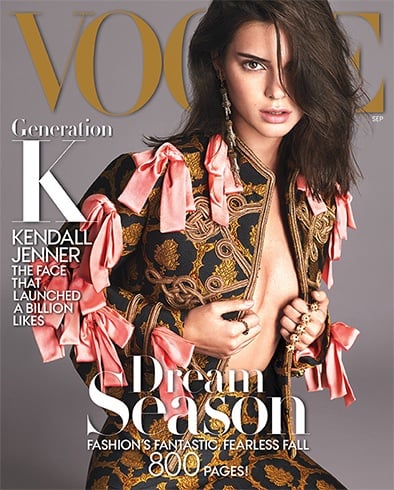 All along the photo-shoot, the young star brought very attractive and pulsating looks. 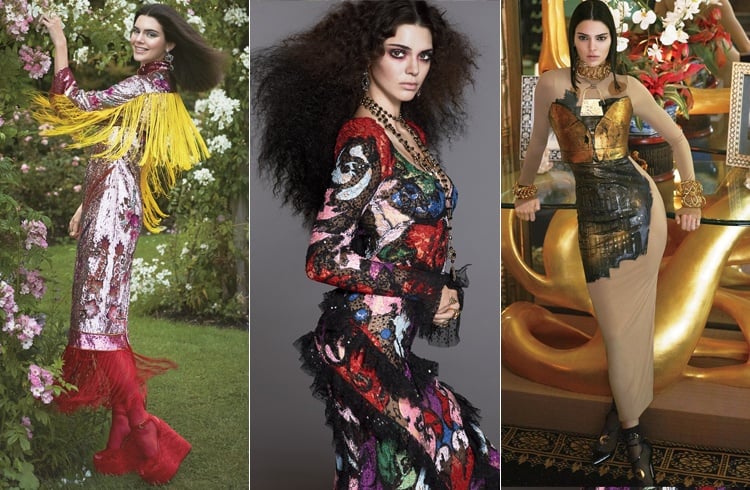 Kerry Washington For InStyle, US

After a controversial photo-shopped image on AdWeek magazine, Kerry Washington comes back with a bang looking herself, pretty and pleasing on the InStyle magazine for the September edition. She nailed the cover in a Victoria Beckham outfit, deep pink lips and nude makeup. Gwen Stefani for Cosmopolitan, US

The real life Barbie appeared remarkably stunning on the cover of the Cosmopolitan, September 2016. In a gold toned embellished dress with floral applique and metal rings from Michael Kors, fishnet tights and flashing blonde tresses, she looked like a golden Goddess. 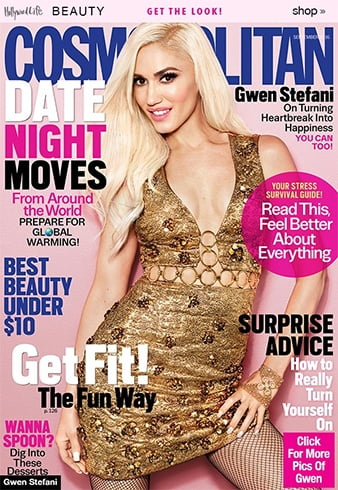 Here are a couple more looks of the doll-like lady. Check out the video here.

Bella Hadid For Glamour, US

Edgy and racy looks of Bella Hadid were covered by the Glamour magazine this September. For the cover, she was clicked in a Balenciaga jacket, top, pants and heels along with Ana Khouri earring. 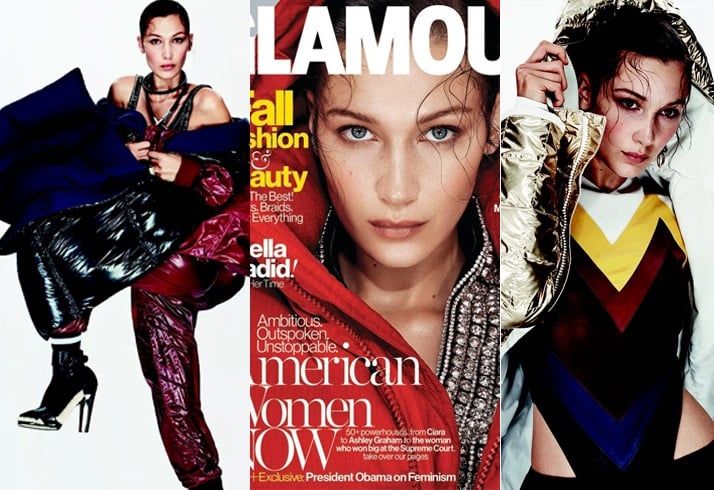 The blue-eyed beauty turned on her magnetic looks on the cover of Cosmopolitan for Germany. She stunned her audience in a midnight blue dress, perfectly blow-dried hair, metallic cuffs and rings and flawless touch up. The long legged sassy models, Bella Hadid and Taylor Swift landed like twins on the cover of Vogue, Paris this September in Dior jumpsuits with ruffled detailing. Bringing back the black into trend, the ladies were captured stunningly by Mert Alas and Mercus Piggot. 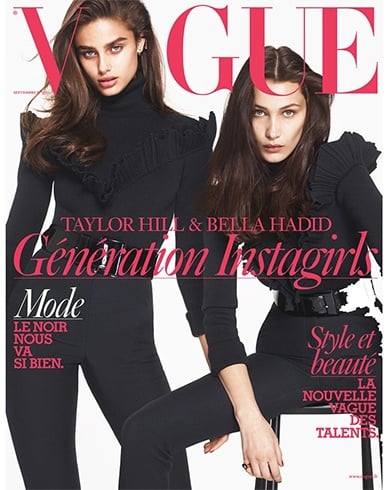 Here is sneak peek at the photo-shoot. 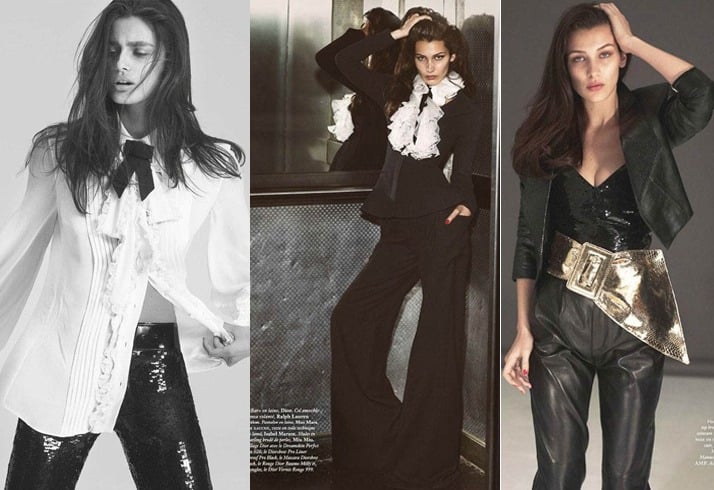 Hope you figured out the right magazine pick for the evening. We surely did, and we are getting them ALL!

Bollywood Bag Styles That Have Us Hooked!

How To Get Rid Of Back Fat

Fashionlady - March 1, 2014 0
As per tradition, I am back with March 2014 fashion magazine covers, which are now available at the newsstands. After celebrating the month of...