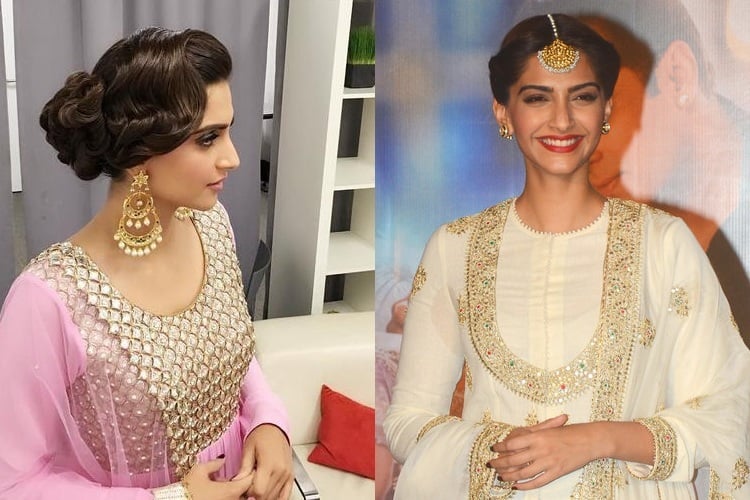 Last night before sleeping I was following my social media ritual and I was surprised to see so much of Sonam Kapoor on every page! What has she done now to be going viral on social media suddenly? Well, she has a movie that’s all set to release. Besides that, she has been to quite a few events and she has done a photo shoot with a new haircut. Can you guys imagine how many photos of hers has been clicked and re-blogged in the past 24 hours? Many!

So, why don’t we take you guys through what she wore?

For the trailer release of her upcoming movie – Prem Ratan Dhan Payo, it was a beautiful Anamika Khanna suit for Sonam. With off white colour as a base and gold detailing, she looked like a Rajasthani Princess! She finished her look with an updo and added a beautiful maang teeka to add the regal quotient.

Then, she made an appearance at the SAF Gala in a beautiful Dolce & Gabbana gown which had big roses all over it! Fancy hairstyle, cherry lips, Victorian earrings and a Bottega Veneta knot clutch completed her look. We like!!

Last but not the least, Sonam Kapoor walked the ramp for Amita Bal in a gorgeous creation from the designer. The dress was very simple, but Sonam looked dreamy!! A very intricate hairdo and chand balis completed her look. We fell in love!

Sonam Kapoor did a photoshoot for Talter UK and looked beautiful! She changed her hairstyle and added front bangs to her look. What can we say? Her bangs banged us out!

Check out her pictures! How to Organise Your Handbag