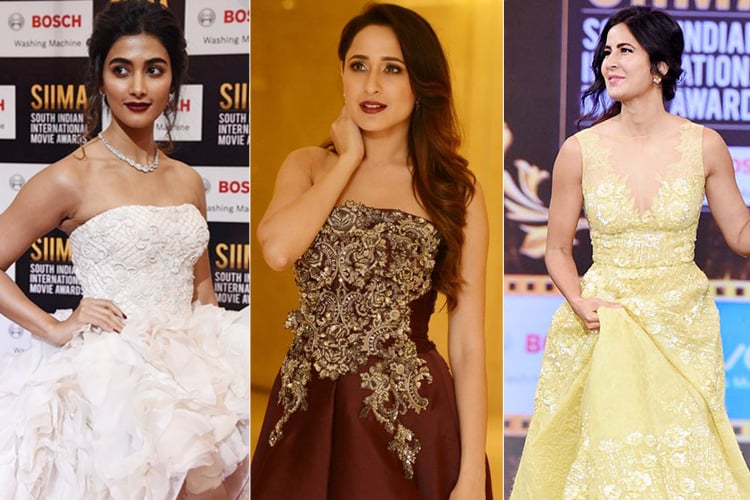 Indian cinema is a package of not just Bollywood but also films from Telugu, Tamil, Kannada, and Malayalam film industries. While the films from the North are greatly appreciated for the elegance, beauty and varied storylines, the South films have a soul, entertainment, and impact-full performances.

Celebrating this effort of film lovers from South was the South Indian International Movie Awards (SIIMA) with their 4th year organized at Dubai. The gathering of stars from all four industries turned the city of gold, Dubai shine brighter than ever before. While we were noting down who was taking home the award, we also made notes of the beauties glamorous styles. Check it out here-

The actress who charmed her way into the film industry with her girl-next-door looks attended the event looking like a rockstar. In a bodycon shimmering dress from Elysian by Gitanjali, she was spotted making a fashionable impact. Wavy hair-do, glittering eyeliner, matte finish deep red lips rounded her look well. 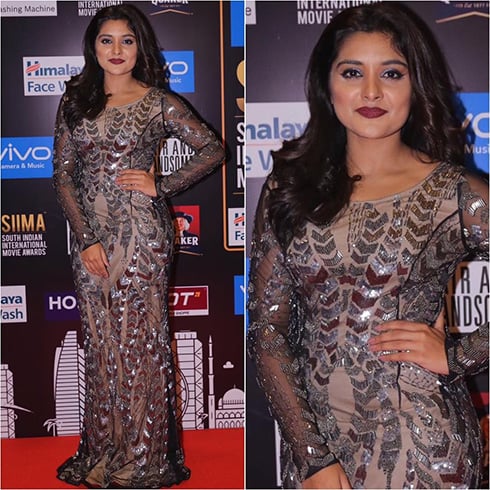 Both day 1 and day 2 of SIIMA 2017, Lakshmi Manchu made remarkable fashion statements with her choices. She was spotted in a gray scale sari by Tarun Tahiliani for the event. She kept her neckline bare and loaded her look with BCBG earrings that were beautifully crafted. Smokey eyes and nude makeup kept her 9-yard avatar stunning. 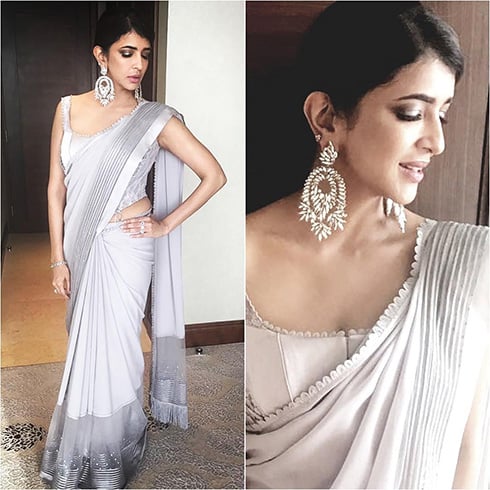 She was also spotted looking like a sparkling ruby in a red Jade outfit. The crossover, off-shoulder bustier feature of the outfit added the stylish vibe to her look. With well-placed curls, Krsala jewelry and deep red lips, she stepped out looking gorgeous. In a floral embroidered gown by Manish Malhotra, Shriya graced the SIIMA 2017. With a neat bun hairdo, right highlights with her makeup, she stunned us like always with her beauty and simplicity. She was also spotted in an Esha Sethi Thirani outfit that held the plunging neckline trend, cutouts pattern, cape style and sheerness in a perfect blend. Aquamarine jewelry was her sole pick of accessories to rock the style. 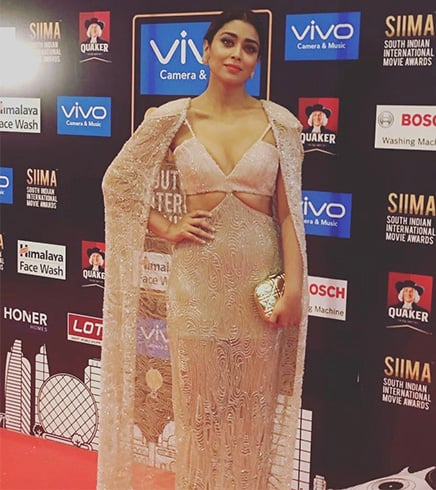 Day 1 and 2 of SIIMA 2017 gave the divas of South ample opportunity to deck up fancy and princess like. Pragya was captured on the glam cam at SIIMA 2017 making a fairylike appearance. She dolled up in a royal looking gown by Monish Jaising. Micare handcrafted jewelry cast a sparkle to her style. Soft and wavy hairdo, well-contoured makeup defined her beauty flawlessly. In a blue and pink Raw Mango traditional outfit, she looked like a true South Indian. Her charming style composed of blue bindi, traditional earrings from Shringaar, a necklace from Sangeeta Boochra and Be Chic glittering clutch. 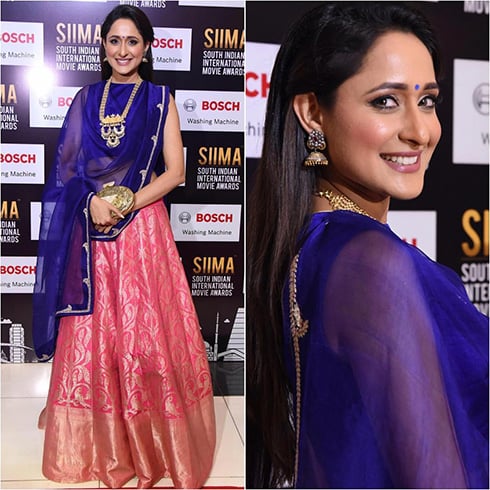 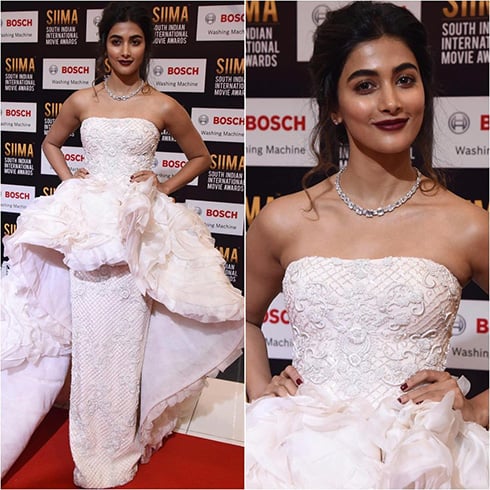 Black never fails anyone and Rakul Preet knew this perfectly well. She did an all black avatar in Yigal Azrouel label for the event. Suhani Pittie jewelry, Nitya Biswas clutch were her sole companions. Love the added one-sleeve feature of the outfit. Rakul Preet was captured doing the opposite shade of the former look. She went from all-black to an all-white look in Marchesa couture. Anton Heunis earrings and Accessories by Anandita clutch blended right into the outfit. 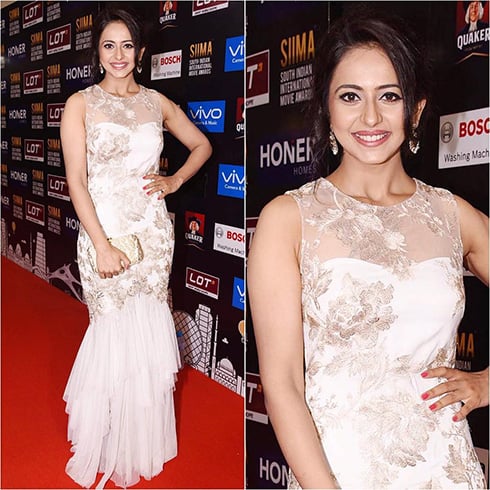 Feather tasseled, thigh high slit from Shriya Som looked sensational on the stunning lady, Lavanya Tripathi. With her hair brushed nice and wavy to one side, winged eyes, orange-red lips, she filled up her beauty to the brim. 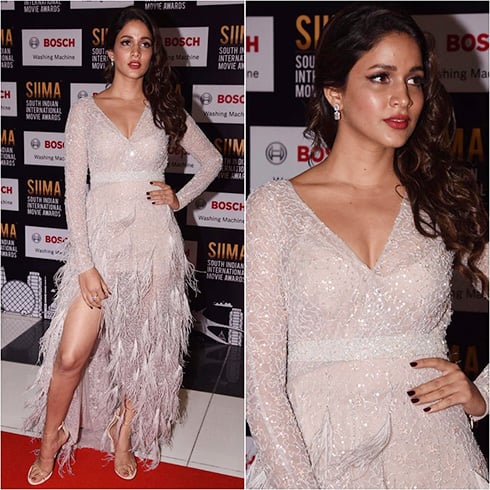 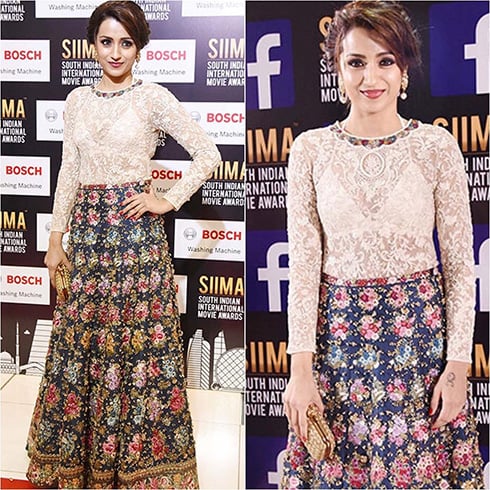 Flaunting her sensuous curves was Regina on one of the eventful days at SIIMA 2017 in a Shantanu & Nikhil outfit. She added Puhani Pitties jewelry to light up her look. We were simply amazed by her pink eye makeup. 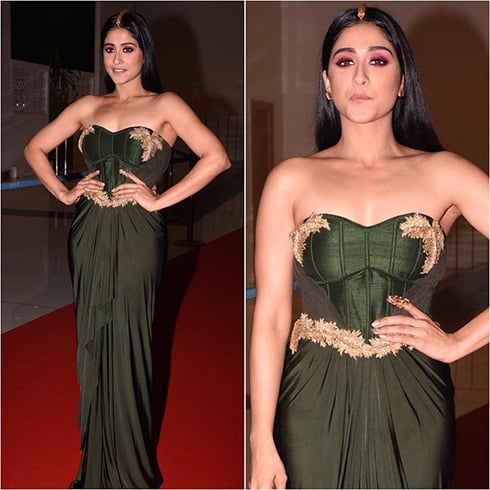 She was captured looking smoking hot in a red Sashi Vangapalli outfit. Dyamor jewelry was her choice of accessories for the evening in place. With 70’s style hairdo, glittering eye makeup and striking red lips, she closed her avatar. Love the balance of embroidery and plain feature of the outfit! 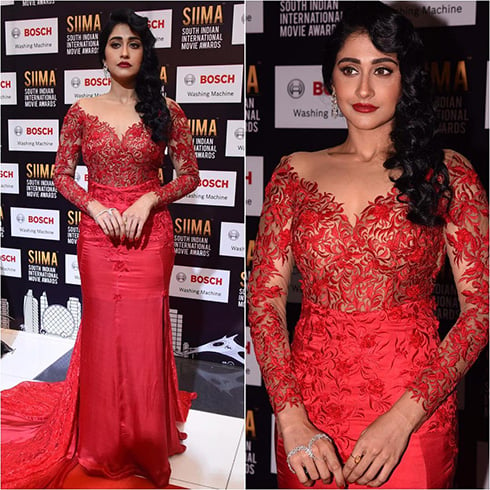 Among the South Stars, we were pleasantly surprised to spot the Bollywood beauty, Katrina Kaif. Along with her Jagga Jasoos co-star, Ranbir Kapoor, Katrina made a grand appearance at the SIIMA 2017.

She showcased her beauty, elegance and royal look in a Tony Ward yellow gown. With a neat bun that had a few strands off the hook in nice curls, she looked mesmerizing. Going bare minimum with accessories like always, and with soft makeup, she impressed us with her glamor. 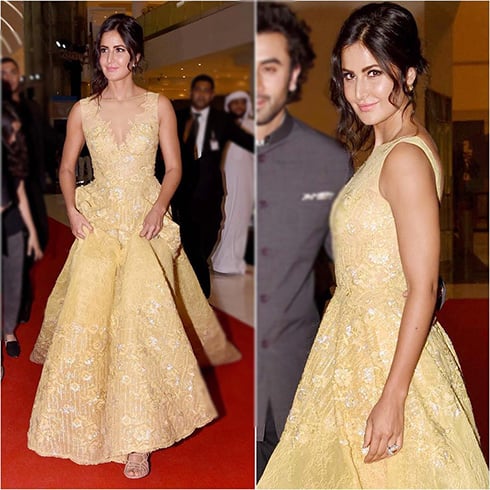 Which star has won your award for beauty, glamor, and fashion? Share with us your comments in the section below.

All You Need To Know About Water Spas And Water Therapy...

16 Mind-Blowing Hacks How To Apply Mascara On Eyelashes Swiftly

How to do Dutch Braids – Video and an Infographic Tutorial