Do you know that time of the year when fashion influencers and celebs across countries flock together in the city of New York to get an idea of the fashion trends that would be ruling the next season? Yes, that time of the year is now. The month-long celebration of fashion just started last week with its New York leg, and we are blown away by the new designs that rocked the ramps. The star studded event not only had the top notch designers putting forward their creations that is sure to rule the red carpets of the awards night next year but also saw fashion bloggers, models, and who’s who of the industry taking over the street’s of the Big Apple.

So let’s dive in:

As Nicole Kidman and Naomi Watts dress up in bright floral prints for the front row, Catherine Zeta-Jones is seen in an understated black dress. Chiara Ferragni picked a shimmery shirt-dress in gold. 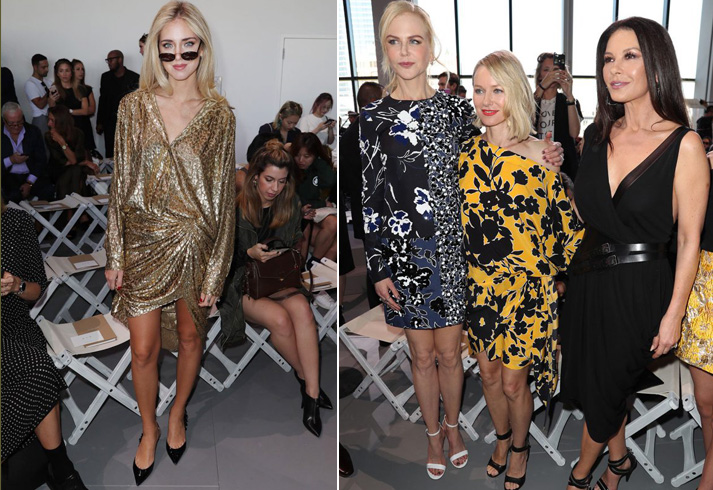 Victoria Justice was vibrant in her yellow floral dress and Jennifer Morrison provided a good contrast to the shot with her white silk dress. But we love how they matched up with suede boots. Another celeb to have caught our eyes with her floral dress was Coco Rocha in her full length, strapless dress. Don’t miss how she matches her choker and sandals. 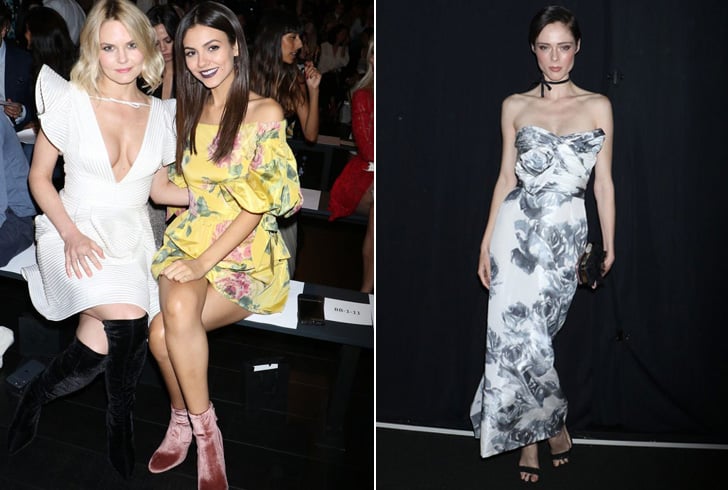 Dianna Agron was stunning at the show in a monochromatic ensemble. The color block top in black and white was a perfect match for the sequined slim-fit skirt. Courtney Love too, stayed always from colors for this evening and threw on an LBD with pom-poms decorating the sleeves. Emily Ratajkowski perpetuated with the white and black theme with her heavily ruffled white shirt and a pair of faded black denims. The main attraction of the show was, without a doubt, Selena Gomez, who is also the Brand Ambassador of the Luxury brand. The singer looked radiant in a boyfriend jeans and leather jacket; while she was accompanied by fashion mogul Anna Wintour in a printed dress and leather trench coat. You bet she had her quintessential glares on and the bob too. Emma Roberts made a fashion statement by pairing a sheer mustard yellow floor length dress with black leotards. Chiara Ferragni, on the other hand, arrived in a jungle print flirty dress. 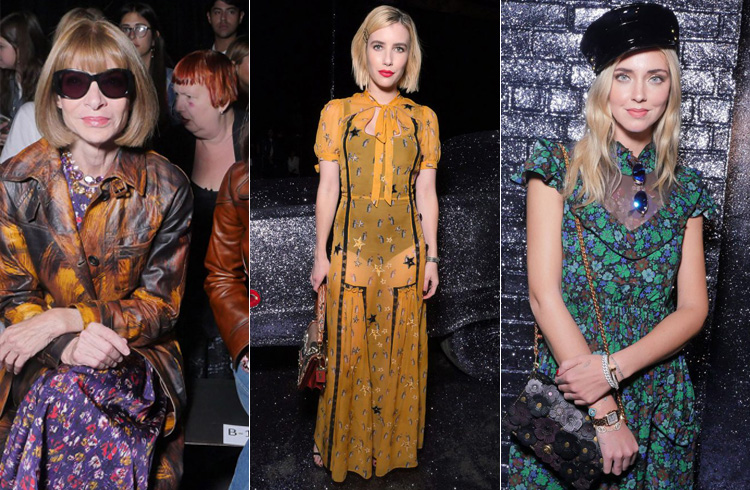 Katie Holmes is not seen on most of the Hollywood events, but made it a point to show up for the fashion festival, dressed elegantly in a pair of loose-fitted silver trousers, a simple white top and a leather jacket. Jessica Chastain attended the event in all whites, while Chriselle Lim layered her white and denim ensemble with a printed silk duster. 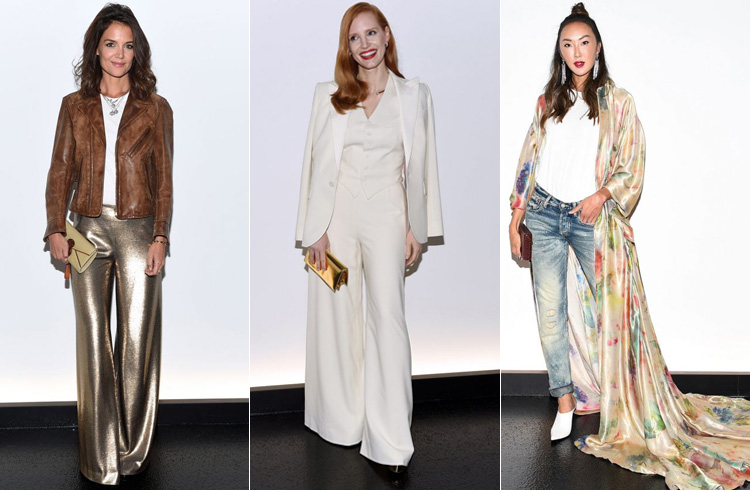 Shay Mitchell curled up her silky straight hair and picked a glossy pant suit with a plunging neckline while Rosario Dawnson was playful in her flared multicolored strapless dress; and we are totally digging that hat. 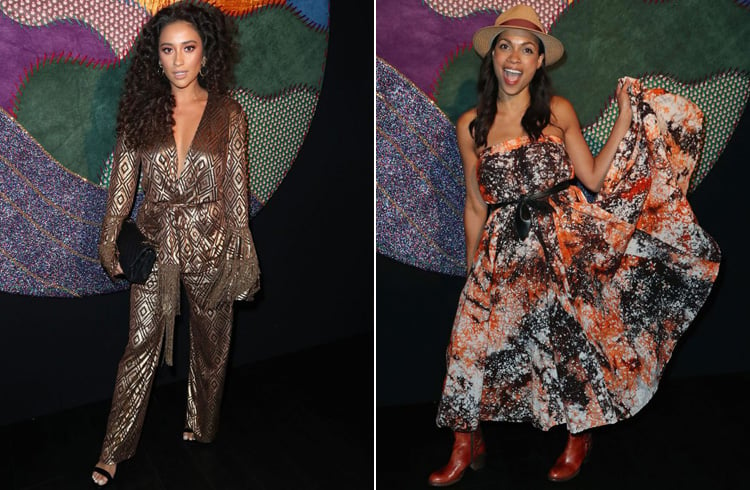 Karlie Kloss and Poppy Delevingne were seen at the show in sleek outfits coupled with ankle length boots. The high neck black dress of Karlie Kloss inspires the businesswoman and so does the navy blue skirt paired with a monochromatic full sleeve blouse of Poppy. We are also a fan of Olivia Palmero’s red and beige dress with a color blocked purse. Sophie Valkers, who was also seen at the Von Furstenberg show, has quite a unique ensemble on, stitched out of three fabrics – interesting we say. 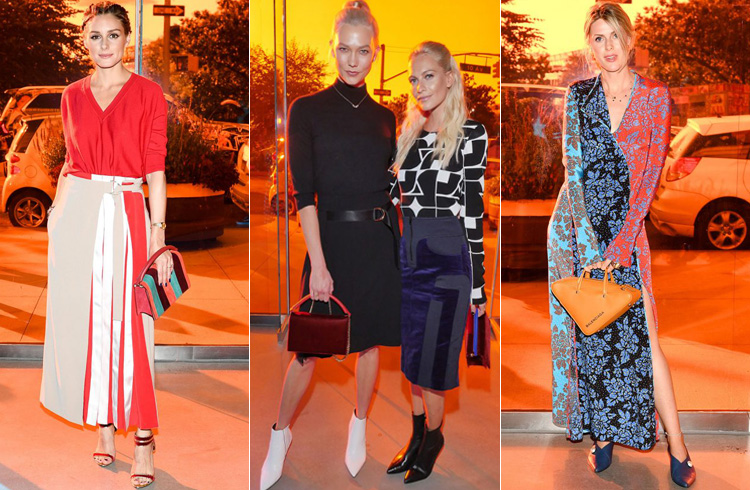 The Fashion week is nothing till we see what trends ruled the streets of the city. We spotted Olivia Culpo, Gigi Hadid, Emily Ratajkowski, Victoria Beckham, Katie Holmes, and Rihanna taking to the streets and turning the entire NYC into a ramp. We are gonna draw inspiration from Gigi Hadid and Victoria Beckham. How about you? What is a fashion week without some fine wine and good dine? We caught Selena Gomez with The Weeknd at Harper’s Bazaar ICONS party giving us major couple goals. While Selena chose to cut off the bling from her look, Abel compensated for her and donned an overpowering jacket with loads of crystals to make for the night. We also caught Nicki Minaj at Philipp Plein after party in her usual self, holding on to a lollipop. That’s it for the New York Fashion Week this season, tune in to this space next week again for all the scoop on London Fashion week.

25 Amazing Benefits Of Almond Oil (Sweet) For Hair, Skin And...

Best Fitness Quotes From Celebs To Hit The Gym Right Away!