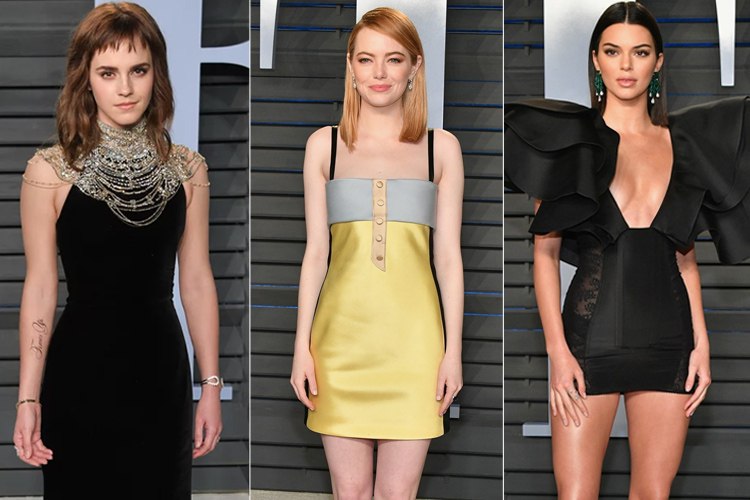 Second only to the grand event itself, the Oscar Vanity party has a special place on the calendar of every big name in Hollywood. Year on year actors, singers, models and people from behind the scene have marked their attendance to this prestigious amalgamation of stars and given us some new style bars to chase. So what would make you think 2018 would be any different? Right after the Academy Awards wrapped itself up, stars switched into their next best looks and walked into the celebrations.

Here are the looks that caught our fancy!

Emma Watson was seen in an elegant Ralph Lauren gown in pitch black bringing back memories of the Time’s up and Me Too movement. In fact, her choice of wardrobe was not the only reminiscent of the movement for she had a brand new tattoo glaring on her wrist, but no one missed to notice the apparent grammatical error as the tattoo, with its missing apostrophe made little sense. Moving back to the look, we were impressed with the busy neckline sitting as a contrast to the otherwise plain dress. 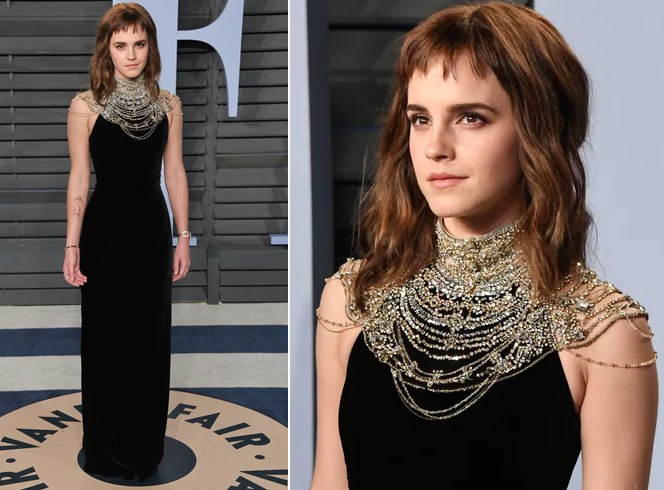 Miley Cyrus made a rare appearance with beau Liam Hemsworth at the Vanity Fair Oscars party. She was classy in her monochrome dress that designer Prabal Gurung blessed with a high slit. We couldn’t take our eyes off the glimmering cocktail ring by Anne Sisteron either. 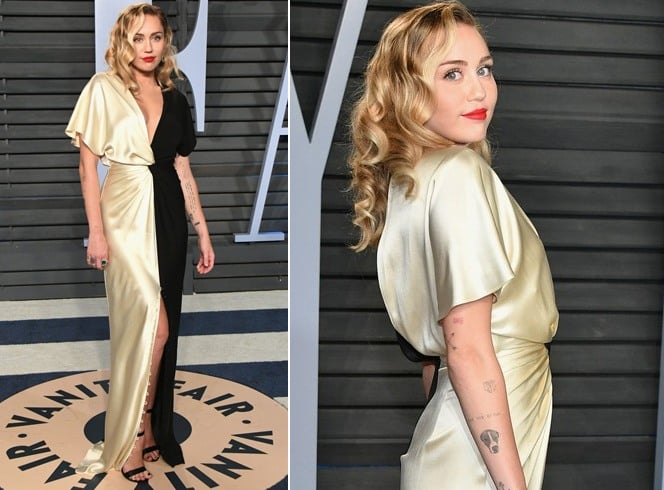 Channel is what the Suicide Squad actress picked to perfect her look for the night. The sheer metallic gown fell along her petite body like a fountain of molten silver. The carried the same purse she had with her for the awards ceremony and it blended with the outfit pretty well. 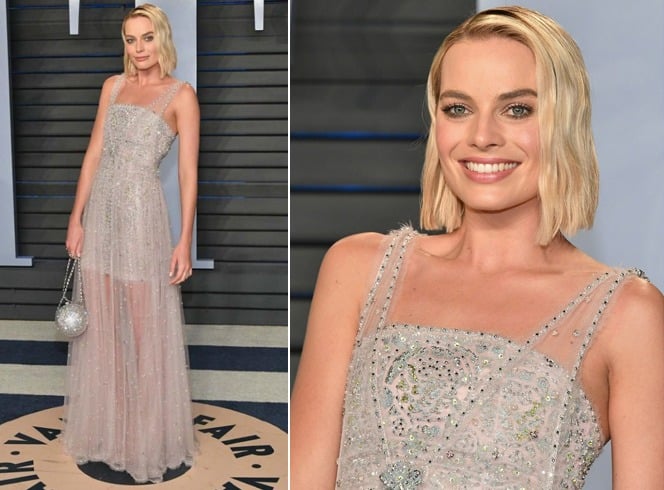 The award winning actress had proved to be a major disappointment at the red carpet the fashion police had some pretty harsh words for her Academy Awards look. Thankfully she switched into a different look and this Louis Vuitton mini dress did everything within its power to control the damage already done. Emma looks playful, and though we are not a big fan of that mom lob, her flirty smiles compensates for everything that’s missing. 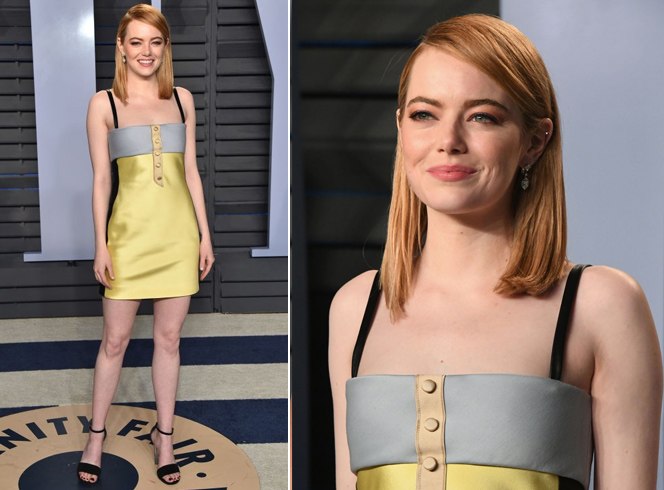 One of the best looks of the evening was that of Rosie Huntington-Whiteley who stepped in wearing a splendid Ralph & Russo couture. The single shoulder number in mint green was one of its kind and though the red carpets are replete with gowns featuring some high slits, this wasn’t like something we had seen in a long time. She ditched jewels and wore her killing attitude to accessorize the look. 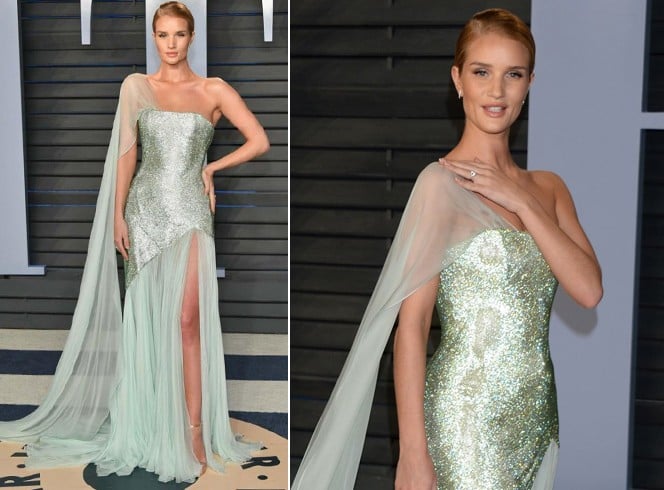 All praises for this plus size model who snubbed all “accepted norms” and looked like a dream in Rubin Singe number at the 2018 Vanity Fair Oscars party. Her uber lusty strapless dress boasted a deep sweetheart neckline that raised the temperature a little high. To complete the look, the model picked a pair of barely there strappy heels. We hear Kenny was rushed into the hospital just hours before she made this jaw dropping appearance and we can’t even.. how does this model manage to look this stunning even when unwell is a puzzle waiting to be solved. We slayed the red carpet in a dramatic Redemption in jet black. The mini dress was complete in itself with a plunging neckline and poufy sleeves, but the model added a pair of emerald chandelier earring to the look and was looking every bit the super model she is. She walked into the venue wearing this patterned number by Zuhair Murad and turned a dozen heads. The look was rounded off by a pair of nude heels and the make-up was kept minimalist. Love her poker straight hair though. 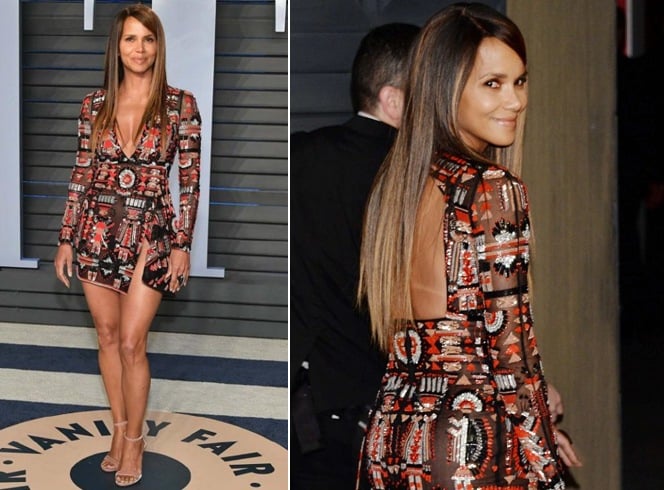 She certainly deserves a special mention for her nude gown embellished with golden embellishments was arguably one of the best outfits we saw at the 2018 Vanity Fair Oscars party. The Alexander McQueen number didn’t need any accessorizing, but the actress picked a couple of golden chandeliers anyway, and we are not complaining. 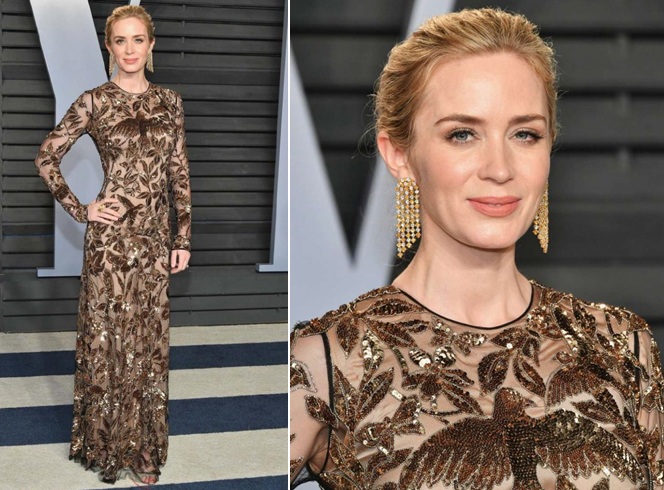 Spotted in a chainmail creation by Cavalli , the actress almost resembled a disco ball – but certainly in the best sense of the term. The cut out dress snubbed the need of added jewels and Wilde was quick to catch the hint. She walked in in a pair of Rene Caovilla shoes and a gold wallet escorted her. By now we know that the Oscar’s after party is a pilgrimage for the who’s who of Hollywood and it was certainly incumbent on us to bring you the best. Do share if you agree with us pick or if we missed your favorite look of the evening

15 Easy Hairstyles Trends in 2017 That Would Blow Your Mind!