Now don’t you underestimate the standards of fashion showcased at the 2016 Teen Choice Awards, just because it is the ‘teens’ choice. While some of the youngest stars in Hollywood were spotted sporting dresses with beautiful prints, others braved the boldest of two-piece sets. But the one seen rocking a black tuxedo was to take away the cake. Don’t get fooled by the word ‘teen’ as there was no dearth of skin-baring wears at the show. Though few ladies did opt for casual-chic makeup drawing inspiration from the Summer themes. Keep reading to check out the best styles of the Teen choice Awards 2016.

The ’13 going on 30’ actress is all grown up and we have witnessed that more than we bargained for in Spring Breakers. But Ashley doesn’t get tired of acing her own game. At today’s event she was clicked in a little Michael Kors brocade dress in silver showing some skin through cut outs across her body. 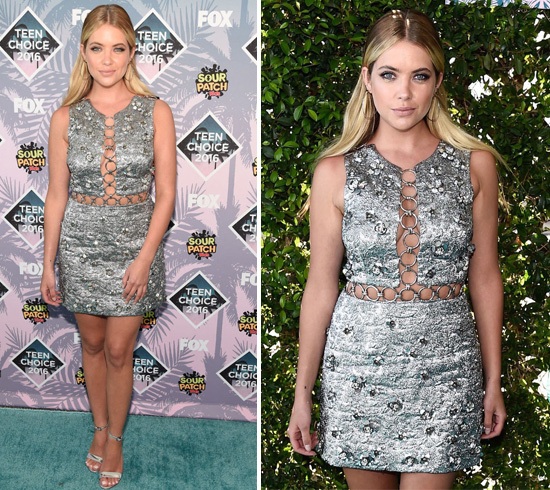 The Disney actress from ‘Girl Meets World’ is undoubtedly the coolest girl to look up to in Hollywood. One needs to take notes of confidence from her. Who else could take to the red carpet of an award night in a casual denim Trench coat? Nevertheless, we are totally loving the Miu Miu trench she rocked – this is exactly what we need for Fall. The talented singer, actress and author preferred keeping it light. But her simple yet flirty Self-Portrait floral bralette teamed up with a matching midi skirt didn’t let her go unnoticed in the ocean of celebrities. I wonder how many have cast sighs of helplessness, can anyone else look effortlessly chick like this multitalented diva? Only if being a witch could make someone this sexy, guess every girl would opt to be one. But the actress from Vampire Diaries sure knows the trick. Kat was seen in a fun printed dress by Cavalli. But what is a great dress without grand shoes? So the seductress rounded up the look with Sophia Webster heels. The 22 year old singer-actress-TV personality was slayed at the Teen Choice red carpet in her Retro Chic Jumpsuit. The plunging-neckline of the star’s Balmain jumpsuit left little to the imagination and more people gasping for air. 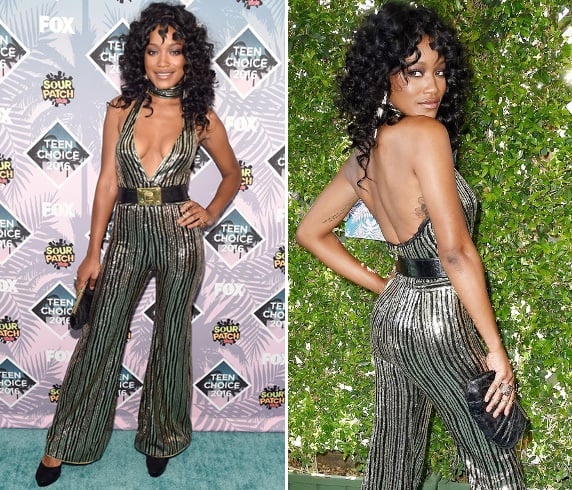 Reality star famous for being a LGBT advocate, Laverne came in looking like the perfect blend of class and simplicity. Her black jumpsuit by Michael Costello stood her out of the crowd and the fashion gurus will agree that to accessorize it with a Chloé chain belt was a wise decision. 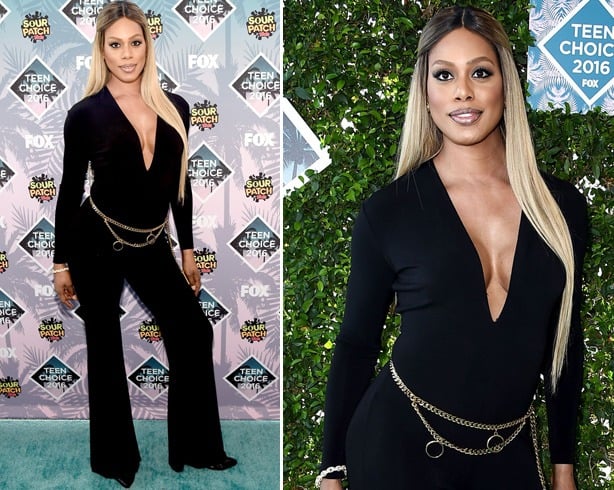 Girls from the hit drama series Pretty Little Liars never fail to captivate. Along with Ashley Benson, Lucy hail stood tall (well not literally though) to prove the style power of the PLL girls. She brought in the print-mixing game and looked like a doll. This actress could roll out of bed, walk in a potato sack, do whatever she desires to and yet manage to look like a million bucks. That is exactly what she did at the Teen Choice Awards. We were totally loving the cutest crop top ever with matching trouser set that she picked from David Koma.

Keeping with the trend of saving the best for last, we present to you Victoria Justice who was seen in her finest avatar. Her mini Versace dress with its statistically placed cut outs and knots was the ultimate ensemble everyone was talking about. Could we ever have enough of them? I know most of us had anticipated a much conservative pattern in the attire, but then what are we even thinking? Even girls won’t dress up all sexy and pretty then who will? Anyway, who among these stars wore your style this night?

The 90’s Hoop Earrings Are Back With A Bang

How to Wear Trousers with Loafers

Fashionlady - May 5, 2016 0
Now move over Met Gala, we don’t have enough time to brood over a single event for like forever. The most recent and hottest...