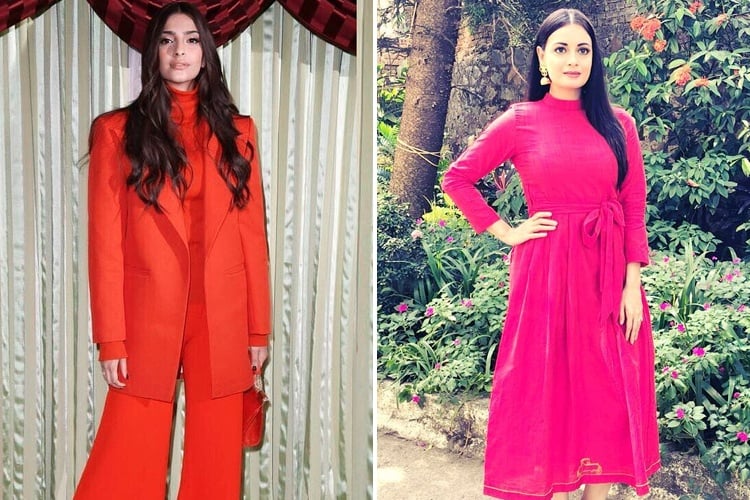 It may not be February yet, but the color of love, passion and romance is going strong.

The color “Red” never fails to render a certain charisma to its wearer and hence observes a prime spot among the favorites of fashionistas across the globe.

Be it an addition to amp up an otherwise subtle look or a whole lot of all red appearance, B-town beauties love their reds to core.

Two tinseltown fashion flag bearers, Sonam Kapoor and Dia Mirza, most recently decided on painting the shutterbugs red with their all red appearances.

Dynamic and absolutely charming, we loved both the looks. Scroll down to witness for yourself the bold and beautiful double dose of red.

Bollywood’s fashion leader, Sonam Kapoor, took us back into the 70’s almost instantly with her bold red suit up. After swaying us most recently with her pink prowl, Sonam pleasantly surprised us with her red hot look.

In London for her upcoming release Padman alongside Akshay Kumar, Sonam made her promotional look a worthy one for the shutterbugs waiting to capture her splendour.

Keeping the whole look monotone, Rhea had Sonam wear the red suit with a polo neck insert in the same hue.

Adding some more red, not the same tone though but a more brick red, was the handbag from label Thale Blanc.

For some definition to her facial contours, her face was done up well with peach blush on touch ups. Also the use of white liner on the inner edges of her eyes, had them looking bigger.

Her tresses let loose in their blow dried form, made for quite an appearance as they fell casually on her blazer. A pair of black peeps rounded up Sonam’s red hot look.

When one of the prettiest from tinsel town dons a bright red, the outcome is most likely to be awesome.

Wowing us with her pretty red look most recently was actress Dia Mirza. The woman confronted the shutterbugs wearing a red long dress and ended up making quite a statement.

If you ask us, both won this race, but we are keen to know what you feel about these gorgeous red appearances?

Looking For A New Tattoo? Get Inspired From These Butterfly Tattoo...

Let’s Take A Look At Victoria Secrets Fantasy Bras Over The...

Fashionlady - June 24, 2017 0
Airports have become the next best place to spot style and even though we love the red carpet styles and party styles of the...