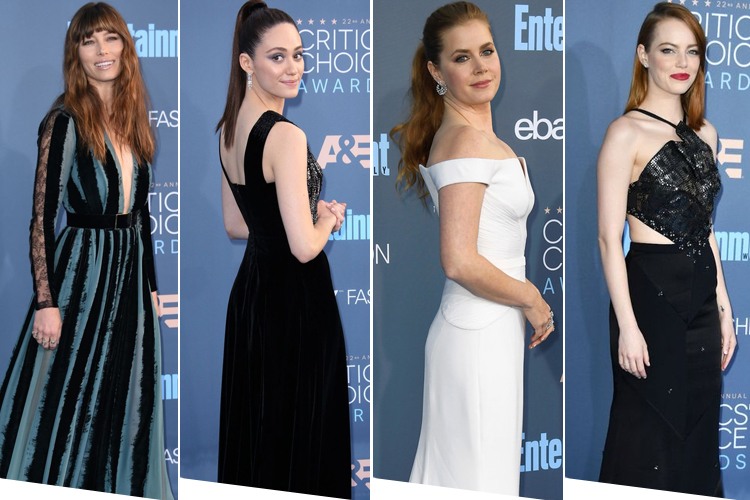 Though carpet of the Critic’s Choice Award was blue, in our terms, regardless of the color, the carpet is red as long as its laid out to welcome the biggest stars of Hollywood. We chase them and bring you all the news on who wore what.

I am pretty sure we all agree that Nicole Kidman is a timeless beauty. Her charm increases by the hour. At the Critics Choice Awards the beautiful Australian actress was seen in a black Brandon Maxwell gown. The shoulder baring number featured a sexy high slit. The 49 year old was ravishing in her classic ensamble. The proud nominee of the Best Actress awards, Amy Adams is an epitome of Hollywood charm. Year on year she has proved herself as one with unquestioned talent and beauty. Her glamour was dominating while she walked across the blue carpet in a while off shoulder gown by Atelier Versace. The design of the dress allowed a slit on the cleavage area and we are pretty sure a very firm bra underneath the dress completed the magic. 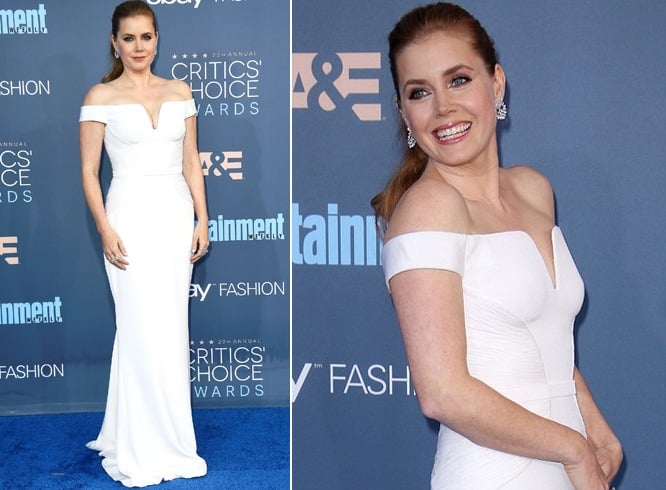 I haven’t covered one red carpet event that had Emma Stones in an embarrassing attire, the actress never gets it wrong. Once again, dressed in an elegant cut out gown by Roland Mouret, she stole the spotlight. The halter neck sparkly bodice of the black number was a pleasant contrast to the skirt that had only a few crystals shining here and there. But what actually mesmerized was her berry red lipstick. 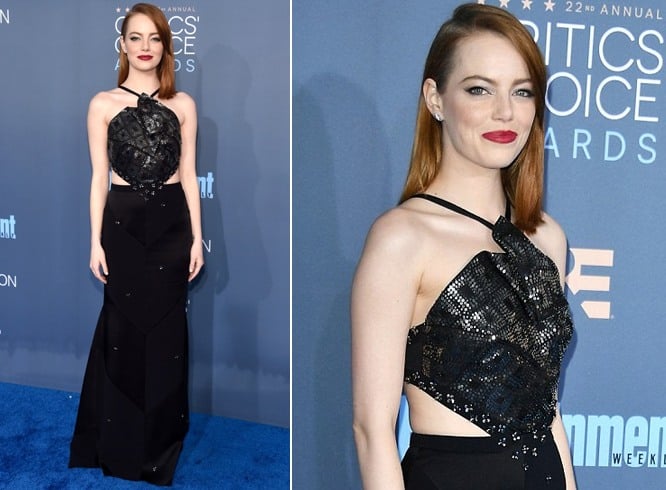 We can’t even begin to tell you how much we are in love with Kate’s sheer dress. The creation was an absolute dream with its plunging neckline covered by a sheer fabric. The 43 year old actress was a Belle of the ball in her black gown by Reem Acra that had sparkling embellishments throughout. The messy hair do, with fringes framing her face has added to the wonderful look. We are totally digging the nude makeup on her. 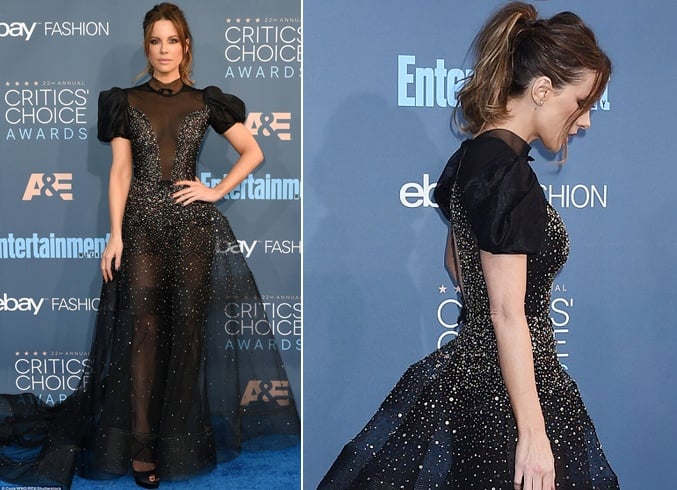 Black was the mood of the evening and we saw everyone on their best black number. Emily Rossum stepped in a low cut Armani dress and the onlookers were left awestruck. The bodice of the attire glittered with a numerous sequenced and though the neckline was plunging to her midriff, we have to say it was placed tastefully. She kept accessories limited to a dangling earring. The neat hair do was refreshing and pleasant. 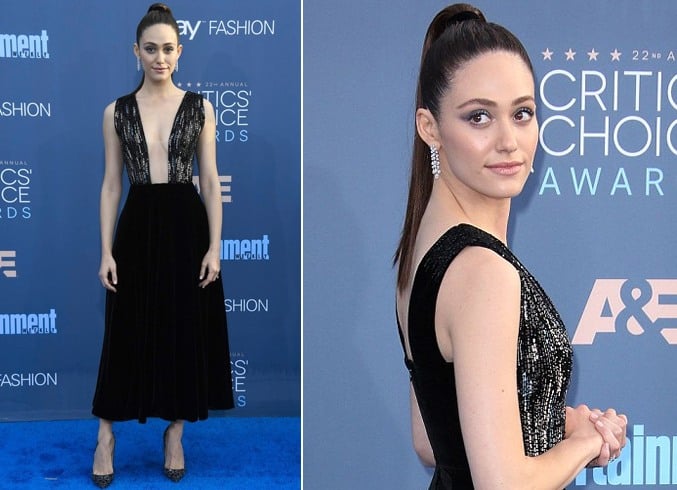 A starry affair was going on all over Kerry Washington’s Ellie Saab dress. The Little black dress brought out the actress’s playful side and the high hem of the fared dress showed quite a bit of her well-toned legs. Though sheer wasn’t a unique fabric on the red carpet, as we said, the stars appliqued on this designer outfit was certainly outstanding. The teenager had battled a lot of bully on account of her size and we are proud of her and the undaunted courage to face the haters. We were glad to see Ariel Winter again at the Critics’ Choice Awards. She was dazzling in a black backless gown elaborated with crystal throughout. We couldn’t help but notice her newly acquired bangs that the Modern Family star debut on the red carpet of the award ceremony. 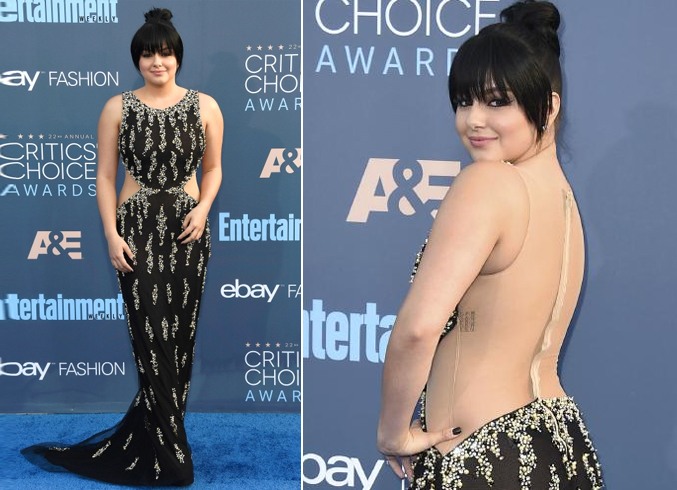 The star of Accidental Love was spotted with husband Justin Timberlake at the event. The 34-year-old was stunning in her Elie Saab gown. To breakout of the monotony of black, she chose one with blue tie and die strips. The flared floor length gown was cinched at her waist by a leather belt. I am really impressed how all these actresses rocked these dangerously deep necklines and yet no malfunctions occurred. 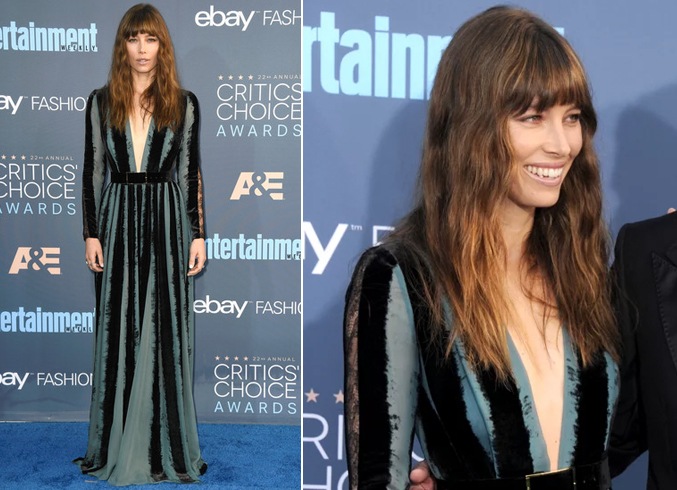 Mandy Moore was quite a break from the rule of black. Her navy gown by Solance London gown flashed a little skin of her wait through well placed cut outs. Her pairing of the very sophisticated number with some understated jewelry spoke of elegance and class. Don’t miss to check out her alluring beachy waves. 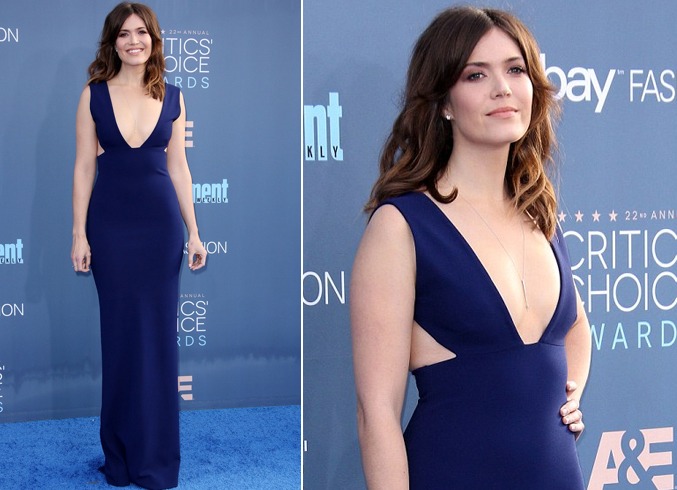 Bella Thorne was a spectacular sight in a flimsy gown scattered with glittery embellishments all over. The sheer backless number was indeed a scandalous one for the Critic’s choice awards but luckily no accidents happened. Singer-actress Hailee Steinfeld was our personal favorite on the carpet. Her flamboyant high low floral frock brought that much needed component from the event – colors.

15 Chunky Anklet Patterns To Flaunt At The Mehendi, Sangeet And The Big Fat...

Stellar Footwear Stories From 2016 By Our Bollywood Celebrities

Myriad Reasons Explaining Why Is Soda Bad For You