Celebrity revelations, controversies, rapid fire round, Koffee quiz, coffee hampers, the famous Lie-o-meter and a host that keeps us glued with his volley of questions.

India’s most popular celebrity talk show, Koffee With Karan, is all this and much more.

After successful completion of 4 seasons, the superbly entertaining Koffee with Karan episodes are back with a new season. With the first episode going viral we can only expect Koffee With Karan Season 5 to be better than ever.

While we look forward to the celebrity line up in the upcoming season, we decided to give you all a brief throwback to all the fashionable moments, the celebrity guests gave us with their Koffee With Karan appearances.

Best Dressed On Koffee With Karan

Frieda Pinto and Nargis Fakri gave us a crackling episode in the Season 4 of Koffee With Karan. While the girls had their share of fun flaunting their naughty side, some of their responses made even Karan Johar blush. The dusky beauty dressed up as a sexy siren in a black gown from Shivan and Narresh. Frieda opted to do some body show with that high slit and wait cut-outs. But we have to admit the lady carried her frame with the right attitude and confidence adding the much needed oomph. This witty star wooed us with her prompt responses in the last season. Sharing the couch with her co-star Shahid Kapoor, the lady made a stunning appearance for her date night with Karan Johar.

Sonakshi was seen wearing a two toned maroon fitted gown from the house of ace designer Nikhil Thampi. The plunging neckline coupled with a clinched belted waist and thigh high slit, only made us fall more for the slimmer and more curvaceous Sonakshi. The Dabangg dresser completed her look with side swept hair and a gorgeous piece of ear cuff. 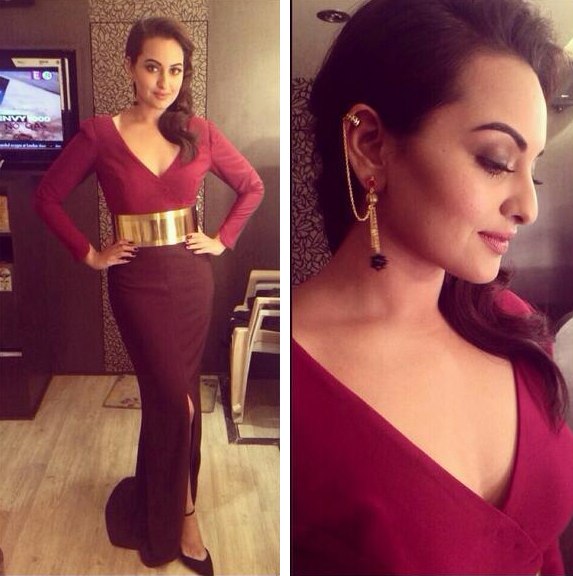 Alia Bhatt along with King Khan shared the coveted couch for the premiere episode of Koffee With Karan Season 5. As much as we loved Alia’s suit up for this season, memories of Alia’s first appearance along with her Student Of The Year co-stars, Varun and Siddharth, refurbished. In the Season 4 the trio appeared on their debut director’s talk show. The teen actor dressed up like a princess for her coffee date. In a Shela Khan ivory gown loaded with sparkling sprinklers, Alia captured all the glitz and glamour of the industry. We have to give it to her for carrying the ensemble with delicacy and panache. 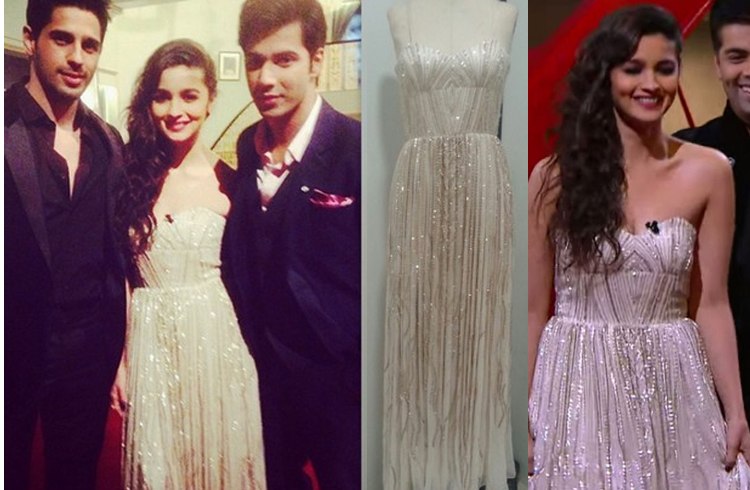 Though Hollywood has set in some rift between B-Town’s BFF’s Priyanka and Deepika, in the last season, the two superwoman of Bollywood shared the coveted Koffee with Karan couch and gave us a piece of their mind and an insight into the industry as the show progressed with the rapid fire round and Koffee quiz.

Deepika Padukone surprised us with her suit up for the talk show. She was the only female actor who wore pants to this glamorous show. We heart the way she up styled the classic black pants and white shirt staple. The embellished trouser with lace detailing on the Alice Olivia shirt rendered a casual chic look to the lady. 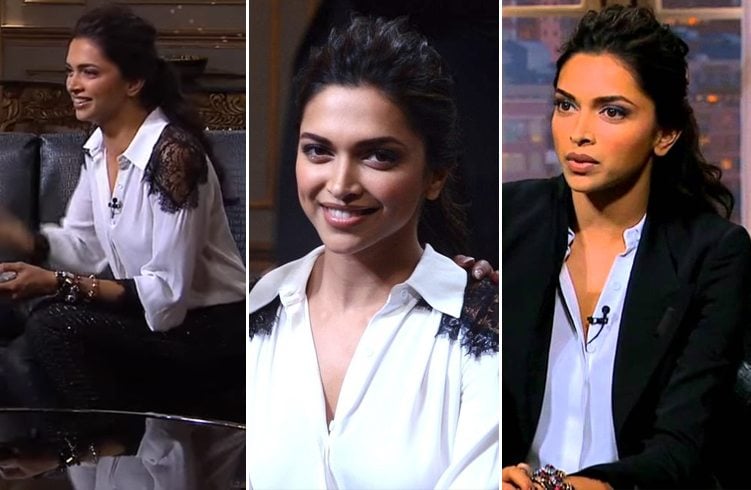 Kareena Kapoor Khan has made multiple appearances on the coveted yet dangerous Koffee With Karan couch. Kareena made her first appearance in Season 1 with Rani Mukherjee. Over the past four seasons she shared the couch with her ex beau Shahid, sister Karisma, husband Saif and brother Ranbir. 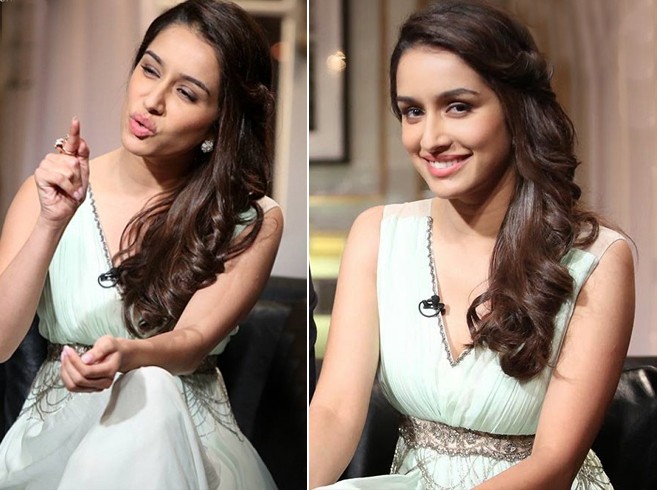 The former Miss World has faced the famous Koffee With Karan rapid fire round twice. For her appearance in Season 3 along with beau Mahesh Bhupati, Lara dressed up the desi girl way in six yards of sophisticated shimmer and shine from the house of Tarun Tahiliani. We have always been a fan of her intellect but this time we admit being swept by her dress up. With a sober make up and soft curls Lara swayed us with her Indian-ness. 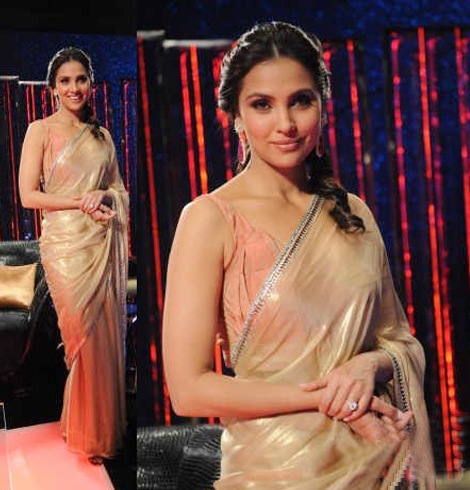 Anushka Sharma made her Koffee With Karan debut in Season 3 along with director Anurag Kashyap. Though Anushka’s not so popular lip job and then rumoured boyfriend Virat Kohli, got the world talking we liked her choice of outfit for the evening. The lady radiated sunshine and positive energy in a yellow well-fitted midi clinched at the waist. After a debut on the Koffee With Karan couch alongside Sonakshi in season 3, Mrs. Nene made a striking comeback with Juhi Chawala. This time the diva definitely looked all geared up for the Koffee With Karan rapid fire round and the Koffee hamper. Although Madhuri’s smile is enough to kill, we heart the star’s beautiful white saree paired with a hot pink blouse, she donned for her second date. Wrapped in six yards of gorgeousness from the house of Sabyasachi, Madhuri wowed us with this look. 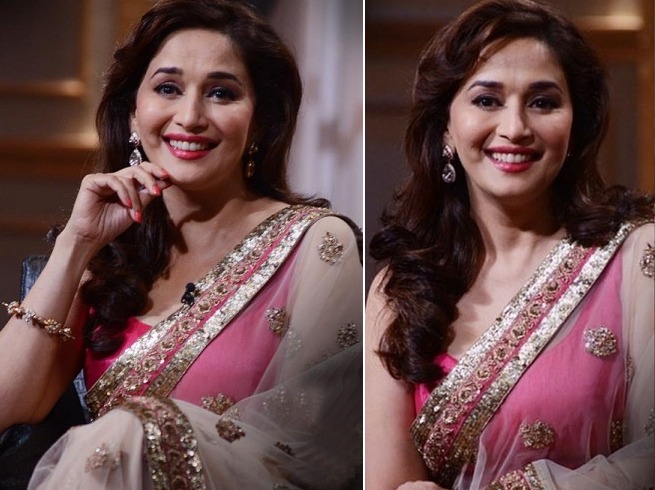 With every passing season, this show is getting more and more glamorous and sensational. So we will definitely be stalking all what is worn, said and done on the Koffee With Karan Season 5 episodes. With a few teasers already out, we just can’t wait to consume all that latest insider gossip about friendships, breakups, link ups and controversies that are currently doing rounds in the tinsel town. You too need to watch Koffee With Karan Season 5 and share all your feedback with us.

6 All Time Trending Sunglasses for Women

Fashionlady - May 2, 2016 0
All romantic tales have a happy ending. This one has streaks of Punjabi and Bengali blood (genetic one, though), rituals, traditions, fanfare, excitement and...