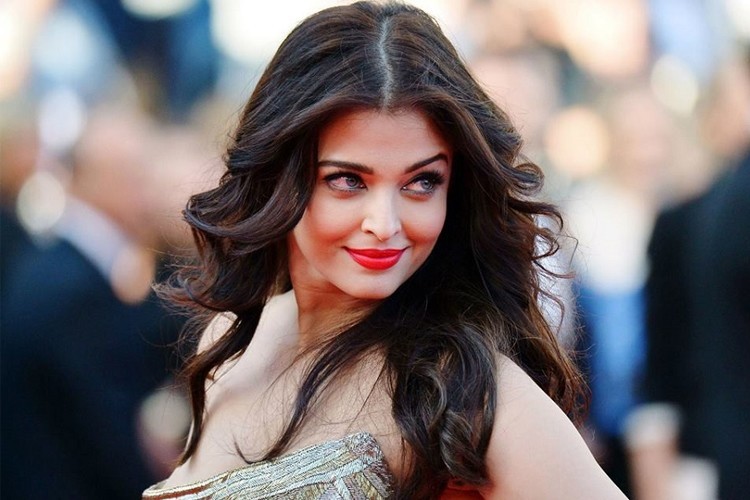 Did Aishwarya outshine Sonam at Cannes 2014? Find out the real story!

Finally Aishwarya Bachchan outshines everyone at Cannes 2014, tight lisping critics and everyone who had doubted her style quotient. The real Bollywood Red Carpet queen is back in full form with a bang and has once again proved that there is no one except her from Bollywood fraternity to rule the red carpet.

It was indeed worth the wait to see Mrs. Bachchan attending her 12th Cannes Film Festival, after she missed the first day due to the Air Traffic Control strike in France. And what a comeback! Her jaw dropping makeover and her red carpet appearance has indeed raised the bar high even for the fashionably correct Sonam and Freida.

As everyone waited patiently to see the red carpet appearance with mixed reactions and speculations, Aish did disappoint her fans a bit as she couldn’t make it for the day 1 because her flight from London to Nice was delayed. 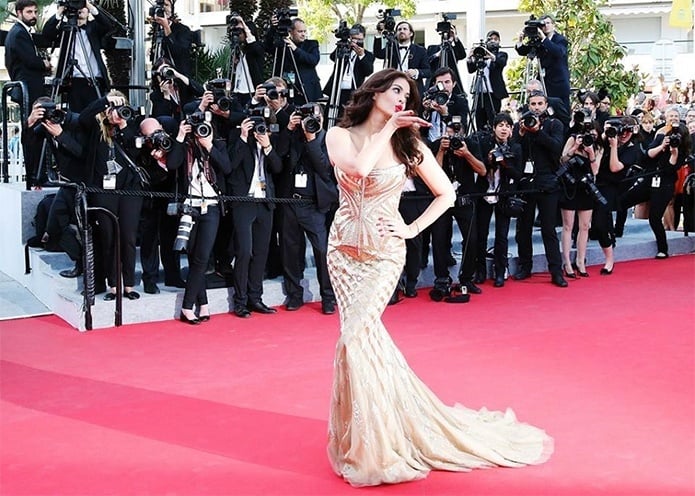 Ever since Aish arrived along-with her daughter Aaradhya and mother Brinda Rai in tow, she had been closely watched over by the fashion critics. Only when Mrs. Bachchan showed up at the Cannes Premiere of ‘Two Days, One Night’ in a stunning strapless gold and silver Roberto Cavalli gown, her much slimmer avatar not only befitted her royalty status, but outnumbered other celebs, who attended the big event.

The mermaid-cut silhouette was a great choice by the L’Oreal Paris ambassador, as it effortlessly accentuated her curves, making her look every bit the royalty that she is. The former Miss World finished off her look with voluminous hairdo and ruby red lips and matching nail paint. And how could we miss her huge rock that she flaunted on her finger? With such statement-making accessories, Aish surely pulled her designer gown at ease! 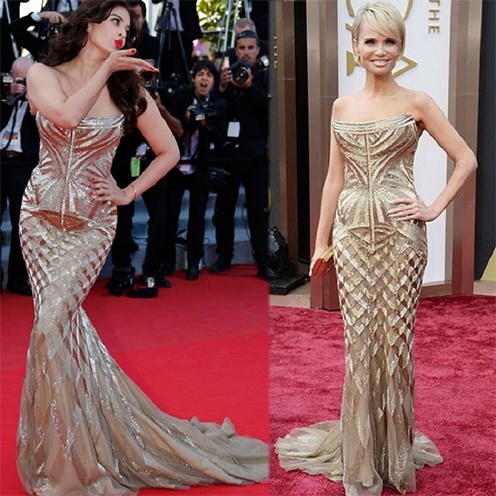 In the past, especially last two years, Aishwarya Rai has faced much criticism for her red carpet choices at Cannes.

Especially after the arrival of fashionista Sonam Kapoor and her post pregnancy weight gain, she was directly compared with the former, who is said to have never failed to impress with her fresh, experimental looks on the red carpet until this year.

Well, as they say someone’s loss is someone’s gain. Sonam’s red carpet wardrobe choice gave some extra scoring points to Aish, who already had the ball in her court for her Roberto Cavalli number. Buzz is that the Bollywood diva has picked the same outfit which Broadway star Kristin Chenoweth had worn at the Academy Awards early this year. Irrespective of this factor, Aish truly deserves all the applauds she has garnered for her 2014 red carpet appearance at Cannes,as the girl has really worked hard to get back into her shape.

Even on day 8, the Indian actress was still the best dressed, even though she took a risk of repeating the designer. Aish wore Roberto Cavalli white pearl and swarovski crystal beaded embroidered tank gown for ‘The Search’ Premiere at the 67th Annual Cannes Film Festival on May 21, 2014 in Cannes. 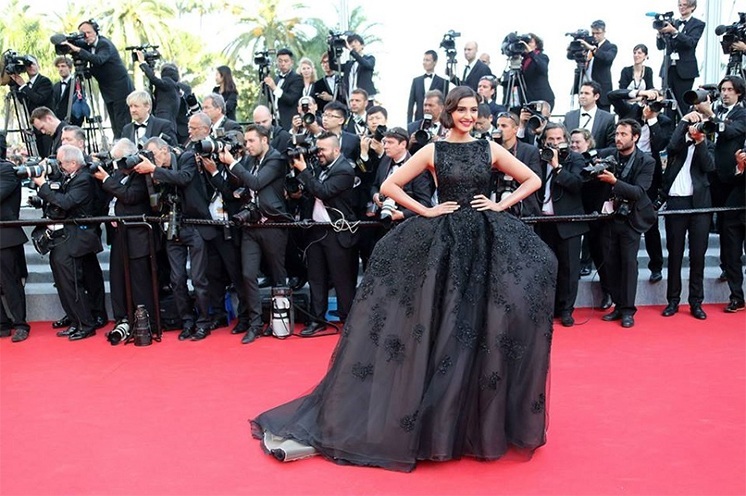 Sonam Kapoor, on the other hand, was a vintage delight, as she wore a voluminous black Elie Saab Couture gown with Gatsby bobbed hairstyle. A day after wowing everyone with her elegant vintage look in a black Elie Saab, she showed up as a desi belle in a pale pink Anamika Khanna couture net sari dress.

The fashionably correct Sonam might have received a thumbs-up for her wardrobe selection, but this time undoubtedly Aish stole the show. Her slim svelte figure should be given more credit than her red carpet outfit choice.

While last year, the highlight was her nose ring, this year she flaunted a huge choker designed by her mother Sunita Kapoor. She completed her look with Jimmy Choo shoes and Ferragamo clutch that went perfectly with the entire look. Later for the Chopard backstage party at Cannes which was also her final appearance this year, Sonam Kapoor wore a lilac chiffon strapless Elie Saab Couture gown. She finished off her look with a Chopard necklace and Ferragamo clutch. 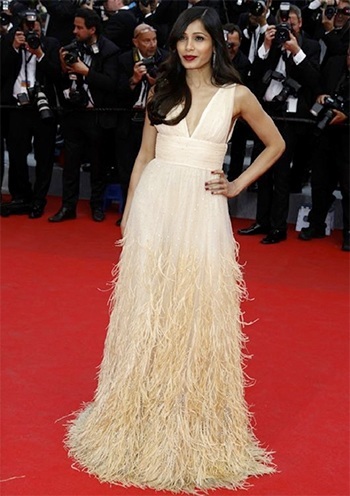 The Hollywood actress Freida Pinto also dazzled at Cannes. She looked stunning in a feathered Michael Kors gown as she arrived for the screening of Saint Laurent at the 67th international film festival, on day 1. The other day I had mentioned how serious side parts are trending summer hairstyle this year. This trend has now been justified by the side-parted soft wavy hair of Freida. Her vibrant red lips complemented her feathered dress.

On her second appearance, she was quite a sight in her gorgeous Oscar de la Renta couture gown with an asymmetrical hemline. The Slumdog Millionaire actress brought just the right amount of drama through her wardrobe selection to the Cannes red carpet. 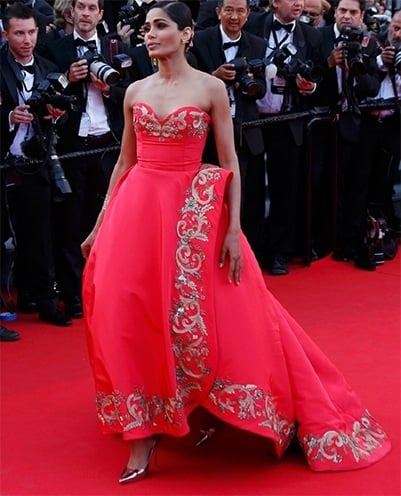 Her high low hem coral Oscar de la Renta gown strapless gown with gold detailing brought her under the spotlight, as she walked the red carpet for the screening of “The Homesman”.  The coral gown with gold lame sequin embroidery featured a sweetheart neckline and rise and fall hemline, which gave us a peak at her gold metallic Jimmy Choos.

She finished her look with a sleek ponytail, nude lips, smokey eyes and metallic pumps which complemented her dress perfectly. 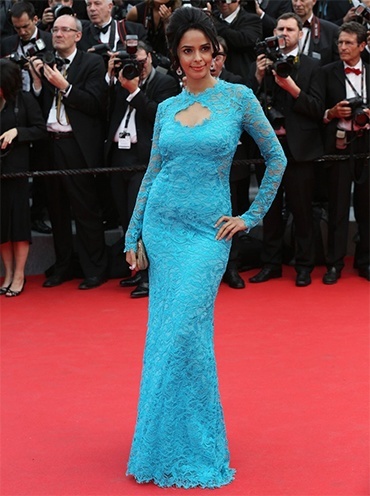 Surprisingly, Mallika looked decent and gorgeous as well, as she walked the red carpet in a blue lace Emilio Pucci gown with an updo hair­style and diamond earrings. Finally, the lady gathered some red carpet fashion sensibilities.

Top 10 Shoes Every Woman Should Have

How To Organize Your Closet: Give That Wardrobe A Celebrity Makeover!

11 Best Setting Powder To Make Your Cheeks Look Stunning And...

Fashionlady - July 26, 2016 0
The much awaited and highly anticipated India Couture Week 2016 finally came to an end, to which we cross our hearts and swear that,...