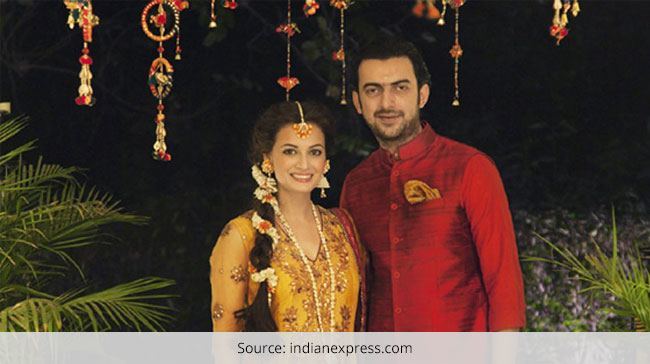 The beautiful and sensational Bollywood celebrity and a former beauty queen, Dia Mirza is all set to tie the knot with her long time beau Sahil Sangha on 18th October, 2014.

It is believed that Dia Mirza gave a miss to the voting in order to prepare herself for the pre-wedding celebrations.

“For the first time, will be missing out on my opportunity to #vote in Mumbai… If not for my wedding I’d never miss out on this”

Happy, excited and glowing, Dia mizra posted a picture of herself and Sahil on a micro blogging site ahead of her mehendi ceremony that took place at her residence on the 16th October, 2014.

Dia wore a gorgeous yellow marigold long ankle-length anarkali dress with intricate gold embroidery, custom made by the designer Ritu Kumar. It is believed that Ritu Kumar has also designed an elaborate wedding ensemble for the bride-to-be.

Dia who considers Boman Irani as her father figure will be doing her kanyadaan on the 18th. During the shooting of ‘Lage Raho Munna Bhai’ the duo shared some great moments and since then have been sharing a special bond. Thus for all the ceremonies that follow, Boman will be on her side as her father.

Dia chose to share the special moment with her fans over Twitter. The lovely couple do seem to be glowing.

Dia Mirza at her Sangeet

The lovely bride-to-be wore a beautiful purple lehenga designed by Anita Dongre. The elaborately embroidered lehenga choli had gota embroidery that further complimented and accentuated her look. We must confess that her simple yet not-so-simple jewelry definitely worked as a fine balance.

Dia Mirza and Sahil Sanghra had been dating for 4 years after which earlier this year, Sahil proposed to Dia when they were at New York. The couple own a production house, Born Free Entertainment.

The grand wedding took place at a farm house in Ghitorni in New Delhi on Saturday amongst both families and very few friends. The entire farm house was decorated in lilies and orchids.

Stay tuned for more updates about this Bollywood wedding and reception.

Jennifer Lawrence Stuns On The “Passengers” Tour And Promotions

Handbags That Bollywood Carried In 2016