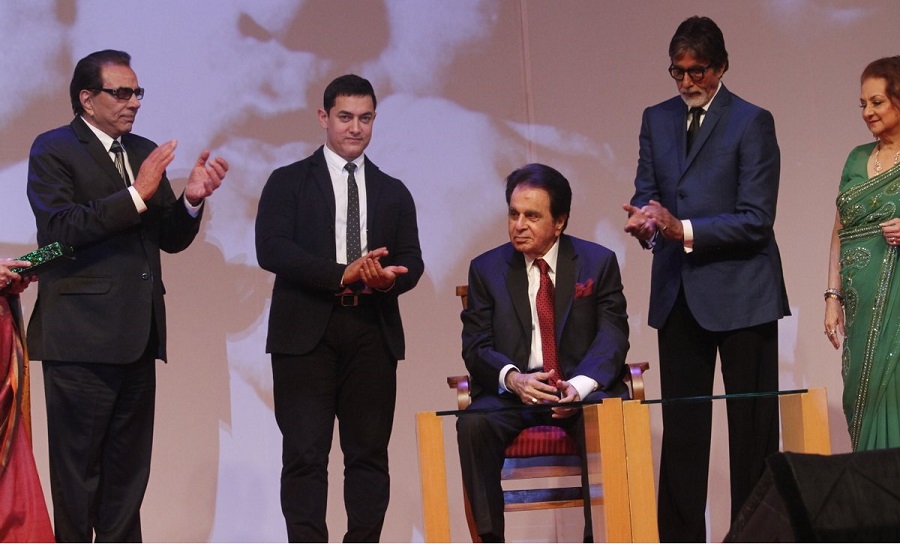 The Kohinoor of Indian cinema, Dilip Kumar, who is in 91st year and celebrating his 48 years of marriage with his better half Saira Banu, has recently launched Dilip Kumar Autobiography – ‘The Substance and The Shadow’ with entire the Bollywood fraternity.

Held at Grand Hyatt in Santa Cruz Mumbai, the red carpet of the event was a star-studded affair from the old and gold ages as well as new generation walk in for the momentous night. While the stage glittered with Bollywood stars along-with author Udaya Tara Nayar and Karan Johar who was the host of the event; missing in the picture was Lata Mangeskhar whom Dilip Sahib considers as ‘Chhoti Behen’. She was slated to sing the onscreen legend’s favorite song, Allah Tero Naam, couldn’t make it because of her ill health.

Thespian Dilip Kumar’s wife Sairas Banu, who looked resplendent in a green sequin-studded sari even in her 70’s was extremely excited and pleased to see the entire Bollywood fraternity participating in the event.

Just before the event, she had said, “Please pray that the dedication we have written the book, it is received by the readers in the same way. Every chapter in the book is important and you all will read something that you have not read before about him.” His autobiography chronicles the 91-year-old’s life from his days before being a star to present – the ups and downs in his life, his family, career, wife and more, as told by him to Nayar, who is a close family friend.

The book also includes details of Dilip Kumar’s romance and bitter break-up with late actress Madhubala as well as how he met and married Saira Banu.

Actress Priyanka Chopra, who walked the red carpet, said she was “honoured” to be invited for the event.”I’m so happy for them today. They have been close to my family for a long time. I have seen all his films and I really admire him,” she said.

For Madhuri Dixit, who walked in with her husband Sriram Nene, it was a proud moment to be part of the event.”Dilip Kumar is a legend in himself and it’s a big day. He has been an inspiration for everybody,” she said. Aamir, who recited a poem penned by Prasoon Joshi specifically for the occasion, said: “We all were eagerly waiting for this big day. I am a huge fan of Yusuf sahab and I was waiting to read his book and his experiences.”

SRK, whom the dup always refers as their son, was absent from the show for some reasons. Other celebrities, who made it to the show include Pandit Shiv Kumar, Farida Jalal, Sanjay Leela Bhansali, Rajkumar Hirani, Prem Chopra, Danny, Sharman Joshi, singer Shaan, musician Lalit Pandit, Aditya Pancholi, Ritesh Deskhmukh and Mandira Bedi along-with her husband Raj Kaushal. Also seen were Kapil Sharma and Ali Azgar.

What to Keep In Mind While Wearing Denim Skirts?

Accessorize The Floral Dress: How To Wear Them Correct

What is Ayurvedic Cleanse? Why You Should Do It?