Indian fashion designers are big in Bollywood, as well as Tollywood. From films, to weddings, to ramp shows, and other big events, every actress derives her style inspiration from popular designers. And South Indian actresses love fashion couture too. Manish Malhotra, Sabyasachi Mukherjee, and Anita Dongre are few of the sought-after designers. Here are five top fashion designers loved by the South Indian celebrities:

Here is the list of fashion designers loved by celebrities:

Sabyasachi Mukherjee’s creations are easily distinguishable and loved by all celebrities, including South Indian actresses. His signature style includes high necklines, vintage embroideries, and florals. Sabyasachi works the old world charm and has everyone falling in love with his work. Here are few South Indian fashion looks:

In the South film fraternity, Samantha Ruth seems to have a great sense of fashion. The stunning actress is always well-dressed, be it in fitted dress or traditional saris. We love most of her style choices, especially her traditional wear. In a recent event, Samantha wore a brown floral print Sabyasachi saree. The saree featured a long-sleeved embroidered blouse that complemented her really well. Asin tied the knot with Micromax founder Rahul Sharma in New Delhi, followed by a Mumbai reception. The couple had both a Hindu and Christian ceremony with Asin wearing Sabyasachi for the Hindu wedding and Vera Wang for the Christian wedding. Kajal Aggarwal looked stunning at an audio launch event for her film. She wore a traditional red Sabyasachi saree paired with matching red and gold blouse. Kajal completed the look with a center parted gajra and earrings by Krsala. This has remained one of her best looks. Do you agree? Manish Malhotra is one of the most sought-after designer in the Indian film industry. He is responsible for bringing about a style transformation in most celebrities. With a career span of over 27 years, the designer has introduced several iconic looks in Bollywood so far. The ace designer is also adored by leading South Indian actresses. They have shown their love for his creations in many ways. Take a look:

Shriya Saran looked beyond gorgeous at a wedding in one of Manish Malhotra’s master pieces. Her dress features a sheer cape with appliqué work and a crop top with silver paneled border. Sridevi’s last public appearance was at the wedding ceremony of Mohit Marwah. She, along with the rest of the Kapoor family, was in attendance at the wedding celebrations. The late actress started the wedding chapter in close friend Manish Malhotra’s ivory kurta and skirt set. The full-sleeved kurta featured minimal floral embroidery paired with a heavy lehenga skirt. For the accessories, the actress complemented her look with white floral earrings and matching potli bags. She kept her makeup and hair simple with heavy kohl-lined eyes, dewy base, nude lips, and braided hair. 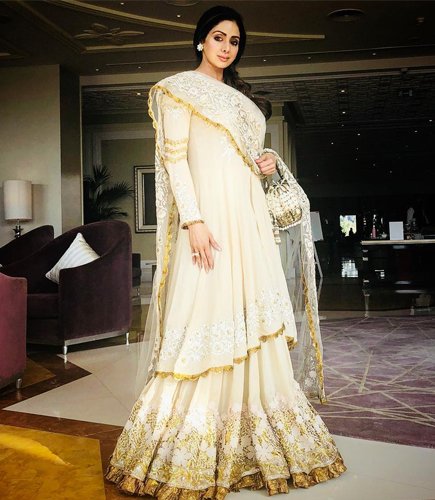 Anita Dongre is one of the most famous fashion designers. Her design is better known for bridal and haute creations. Many celebrities have worn her creations on several occasions. With a degree in fashion from SNDT Women’s University in Mumbai, Anita has created quite an impact with her classic creations. She adds a contemporary touch to her designs, along with traditional craftsmanship, bringing every ensemble to life.
Here are few of Anita Dongre’s creations worn by southern stars:

Tabu wore a blue gold embroidered jacket kurta by Anita Dongre at a reality show for her movie promotions. She paired the look with orange juttis by Bhumika Grover, earrings from Pinkcity by Anita Dongre and side swept hair. 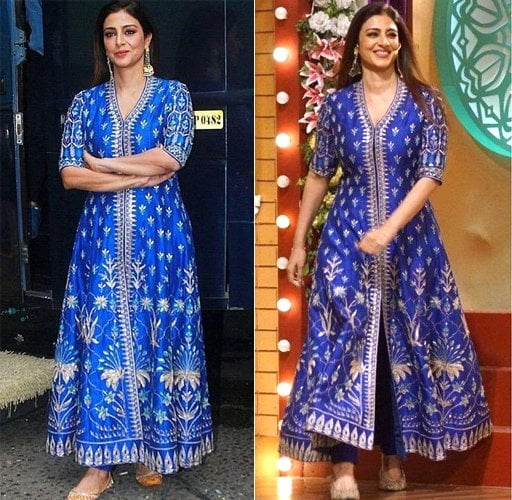 Tabu loves to keep her style minimal and not experiment too much. But that doesn’t mean, the actress look short of stunning. For a movie promotion with actor Ajay Devgan, Tabu wore an Anita Dongre wear. 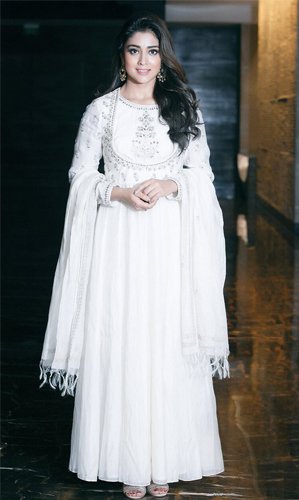 Anushree Reddy is based out of Hyderabad and is a fashion graduate from the London School of Economics. Besides following her passion in designing, Reddy is an avid shopper. She took up a fashion editor job position for a magazine in her initial days. Her keen interest in fashion soon made her to venture out. By the year 2010, Anushree rose to fame and got her first show in LFW 2013. Her signature style includes traditional lehengas, saris, and glows featuring floral motifs and zardosi work. Celebrities have often worn Anushree Reddy’s creations. Here are few looks:

Actress Tamannaah Bhatia wore a mustard and pink embellished lehenga by Anushree Reddy at a store launch in Chennai. She totally stole the show with this look. 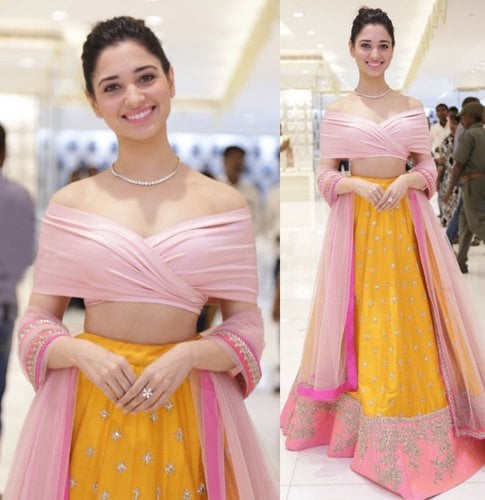 Four times National Award winner Neeta Lulla is one of the most renowned Indian designers. She has created a niche for herself in the fashion designing world. The designer has worked for over 300 movies and has styled a number of Bollywood celebs like Deepika Padukone, Katrina Kaif, Aishwarya Rai, Rani Mukherjee, and Shilpa Shetty.

She is currently working on the costumes of Kangana Ranuat’s starrer-Manikarnika. The task of designing for the entire movie is on her shoulders and she is doing a lot of research for it.

Here, we have covered on South celebs in the best of Neeta Lulla’s creations: The actress again wore a peach lehenga by Neeta Lulla for a movie promotion. Her hair was done in beach waves completed with dangling earrings and pastel makeup.

Trisha Krishnan also chose to wear a Pothys saree from Chennai styled and Neeta Lulla blouse during her engagement ceremony.

Divya Khosla Kumar wore a silk traditional wear finished with golden jhumkas and a gajra on her hair. As adored as they are by the southern celebrities, these designer outfits redefine how they look on the red carpet. Resplendent in a silk sari, chic in a fusion ensemble, or swank in a pantsuit, the extremely talented and creative designers that are listed above, are at the helm of fashion couture!

7 Health Benefits of Oats and how it Helps in Weight...

How to Wear Strapless Dress?

Fashionlady - June 17, 2013 0
Circa 1995 when Manish Malhotra, the pied piper of Bollywood fashion had managed to toss up a job for himself in Ram Gopal Varma's...