The fashion world responds to a global uproar of willfully celebrating beauty. And it comes through an explosion of unabashed designers who aren’t scared to experiment. The best creative fashion designers in the world defy all neat explanation. 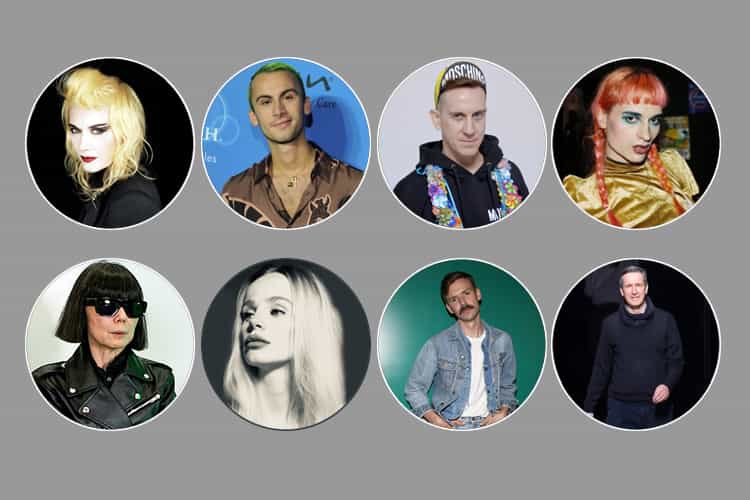 The wacky fashion designers bring about a wave of humor, a sense of punk rebellion, and a stand for individuality. And as always, we will attempt in distilling the season’s plethora of designers, so you can enjoy what the year ahead has in store.

Most creative and rebellious fashion designers in the world:

Here are eight of the best eccentric fashion designers that made big news season-after-season:

Designer Pam Hogg’s creations are non-conformist with a punk approach. Her form-fitting creative collections celebrate strong women with a fierce aura. Hogg stated women this way: “It’s the eternal return of the goddess; she’s a powerful but non-aggressive woman. They are not meant to be aggressive because they are strong.”

Pam’s latest show was all about candy-colored latex trench coats, her signature catsuits, judiciously-placed patches, and a range of barely-there fabrics. All these Hogg staples were nothing short of high art.

The high points of one of his recent show included a ruby-red sequin-covered belted trench coat dress and the new-age puffy coat. Similarly, a sharp-shouldered shirt and swishy pant look had the same crimson sparkle. Cowan’s adaptation of creating a strong styling moment is on-point. See the glitzy rodeo or checkered rhinestone over-the-knee boots, which are downright euphoric.

One of the interesting fashion designers includes Jeremy Scott. And it’s no top secret that Scott’s designs involve a theme, be it the valley of the dolls or the overgrown floral bouquets. Known for his whimsy, tongue-in-cheek designs, the American designer has delighted his fans with cartoon-inspired characters.

During his Fall 2018 runway show, Jeremy showcased the most sensible winter footwear choice. Silver thigh-high boots were accentuated with neon green laces, shiny gold thigh-highs were matched with a cropped gold jacket, bright orange, and a printed version had a puffer quality paired with hot-pink fur thigh-high boots to make a statement.

Designer Matty Bovan staged his first solo show for Fall earlier this year, which painted him as one of the growing designers in the London fashion scene. Bovan moved away from his standard linear designs and boost the volume of skirts with tulle layers and padding the hips with strap-on panniers.

But perhaps the highlight of the London Fashion Week was the helium-party-balloon-filled head dressers worn with mashed up ball gowns. When Bovan was asked about the designs, he stated, “It’s about carrying the weight of the world on your head-but in a light way.” The designer dedicated the collection to his grandmother who passed away last summer.

One of her pieces was showcased in Palazzo Pitti for a Gala. In addition, the designer has moved to Florence to help backstage at PITTI UOMO for well-known brands.

You can see her creations below where she has taken knitwear and other synthetic fabrics to a whole new level.

Adam Selman designs are known to be playful and it unabashedly reflected in the Fall 2018 ready-to-wear designs that were an ode to the 80s. As a whole, the collection was a tribute to the spandex-loving photographer and his muse, Ypsitylla Von Nazareth.

The collection included the 80s forgotten mini-dresses with puffy shoulders, oversized blazers with a zipper down at the center-back and faux fur galore. Fun, bold, and sordid was the whole theme here.

Born in Antwerp in 1958, Dries Van Noten was born into a family of tailors. From the start of his career, Dries Van Noten has presented collections for women and men for Spring/Summer and Autumn/Winter every year.

“Fashion is a reflection of our times, well; maybe that’s enough of that! Let’s do something optimistic, enjoy things-and really go for it!” the designer says.

In June 2008, the Council of Fashion Designers of America (CFDA) honored the designer with International Designer of the Year Award. This was followed by the distinction of “Royal Designer for Industry” (RDI) from the RSA Trustee Board in London, in November 2008. In 2009, the Flemish Chamber of Commerce (VOKA) inducted Dries into the Galerie des Eminents; the Flemish Royal Academy of Belgium gifted him with the Gold Medal and the Couture Council of the Museum at FIT in New-York honoured him with the “Couture Council Award for Artistry of Fashion”.

In May 2010 Dries Van Noten was invited to preside over the 25th edition of the “Festival International de Mode et de Photographie” of Hyeres (France), and in 2014 he presided the jury of the 7th “A Shaded View on Fashion Film” Festival (ASVOFF).

Dries Van Noten is one of the few remaining designers who do more than making a statement show. On several of his runway shows, he has depicted different types of women.

When designers are really innovative, they give us what we didn’t know we wanted. And it sounds like the best excuse to buy something new yourself, don’t you think? Hope this blog on innovative fashion designers will meet your interest and needs.

What Are The Symptoms Of Breast Cancer? Every Woman Must Know...

Top 10 Best Kajals In India To Enhance Your Beautiful Eyes

Get the Gatsby Look