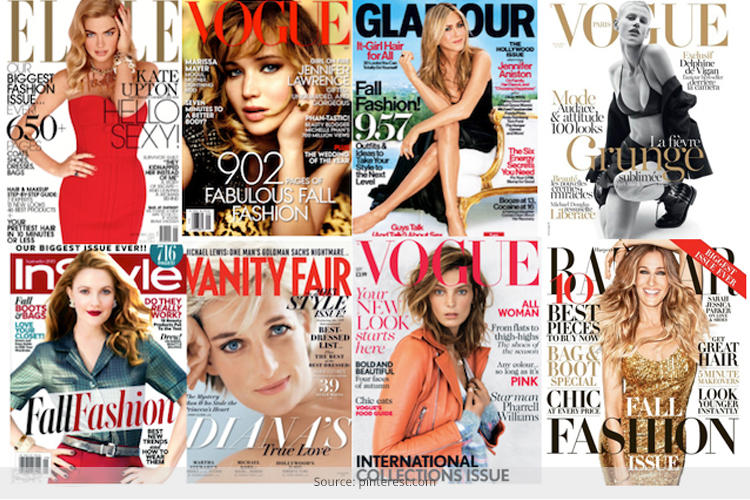 It seems September is going to witness some record-breaking grounds as some of the leading fashion magazines have decided to make some huge ad page gains through their September editions.

Elle magazine has published its biggest issue ever with 442 ad pages. According to this magazine, this is a 12% gain than last September. Harper’s Bazaar is also not left behind, as it has also released its largest issue, with 397 ad pages making a 10% profit than last year.

While Americans are anticipating chiller temperature with vibrant autumn leaves and delicious pumpkin lattes, back in India, we are also enjoying post monsoon days and as we sit on pins and needles, we along-with readers from across the globe, anxiously wait for  the best fashion magazine issues of the year.

The September month is not less than Olympic season for fashion magazines, as each glossy joins the rat race to be the biggest and the best issue of the year. Even celebs join this marathon to have their coup of sorts.

Ask any fashionista and she’ll tell you that the September issue of all of the top glossy publications of the year isn’t one to miss, thanks to the lengthy pages of heart-throbbing fashion and beauty trends, covetable must-have pieces and stunning cover girls.

Jennifer Lawrence, Blake Lively, Kate Upton and Drew Barrymore are among the heavy hitters, who have managed to be the prime cover on an all-important issue this month.

Let’s find out who has got the honor this year. Have a look!

Vogue has come up with its massive issue ever, flaunting 902 pages of magnificent fall fashion. The fashion bible has tapped Jennifer Lawrence, snapped by Mario Testino for its cover page.

Although this is Jennifer’s debut on Vogue, the Academy Award winning actress was at all her ease for her photo shoot. Her cover shot is going to indirectly promote her upcoming movie, Hunger Games: Catching Fire, which is releasing in November.

The Hunger Games actress has worn a glen-checkered Calvin Klein Collection top, with unkempt hair and makeup for the cover shoot. Inside the spread, Lawrence is seen in striking ensembles by Louis Vuitton, Ralph Lauren Collection, Rochas, Prada at Cornelia Guest’s Templeton Estate in Old Westbury, NY with her dogs.

As I’ve already mentioned, this month almost every fashion magazine has published their giant editions of the year, the InStyle magazine was also not left behind. Just like Vogue and Harper’s Bazaar, its September issue has turned out be a record breaker.

As per the magazine, with a 716-page edition, they have published the largest issue in their 20 years of history. And Drew Barrymore, who is a record setter in her own right, was the best choice for donning the cover girl of this historic edition according to the magazine.

This is her 7th cover shoot for this particular magazine, the most for any star ever. The issue showcases a compilation of her both old and new phostoshoots. This issue speaks about her life and how the actress has proved the “live happily ever after” hypothesis.

With new editor-in-chief Eva Chen spearheading the September issue of Lucky, the zine featuring beautiful Blake Lively was tapped in for the cover page. The star gave some of her luxe looks in Gucci, styled by the legendary Carlyne Cerf de Dudzeele.

“It was very different than any other shoot I’ve ever done before because I was wearing clothes I wouldn’t normally pick, but I was in the hands of such icons in the fashion world. It’s nothing that I would ever put together, but it looked pretty cool.”

Your favorite Gossip IT Girl has given a few interesting styles, which are instant head turners and also, there is a plenty to hear from her in this amazing edition.

So just let us know which one is your favorite issue this month?

Healthy Weight Loss – How Many Carbs Per Day?

These Magazine Covers Has The Most Amazing Faces From Bollywood

Fashionlady - December 2, 2014 0
Winters have set in, but guess what? December is turning out to be one hot month as our Bollywood divas unveil their super sexy...