This year is packed with big-time Bollywood weddings. May 7 and 8 are tentative dates for the Sonam Kapoor-Anand Ahuja wedding in Mumbai and by the year-end (though the official date is yet to come in) we may witness the marriage of Deepika Padukone-Ranveer Singh. The lovebirds Sonam-Anand had Geneva in mind as their wedding venue. However, it seems their venue has changed – from destination wedding to desi-style Mumbai wedding (or big fat Punjabi wedding).

What about Sonam Kapoor’s bridal outfits? There is no change here, so far, in the selection of couture designers. It means her trousseau is going to be custom-made by some of the best names in the business.

According to Bombay Times, Sonam’s wedding ensembles will be designed by Abu Jani and Sandeep Khosla, Anamika Khanna and Anuradha Vakil. If we go by reports, Bollywood’s true blue fashionista Sonam Kapoor will not go in for conventional bridal colors (red is a predictable bridal color as we know), but opt for traditional silhouettes.

It’s no buzz but THE truth!

It is a fact that Sonam Kapoor turned into the perfect showstopper bride for Abu Jani and Sandeep Khosla at a recent couture week. Earlier on, Sonam had said, “I feel great. It’s a beautiful outfit. It has got all moti ka kaam on it and it also has Abu Jani Sandeep Khosla’s famous chikankari work on it. It’s stunning.”

Sonam Kapoor’s dress designer Sandeep Khosla also had complimented Sonam’s flawless sense of styling. He said, “She’s the best. She’s the woman who’s invented the word fashionista in India. She’s responsible for it. And look what an honor, she’s just walked for Ralph & Russo and she’s loved our clothes since she was a kid.”

The new age bride-to-be Sonam Kapoor has been an ardent fan of Anamika Khanna. In fact, Sonam and Anamika posed together for the cover of Brides Today for their February 2018 issue, wherein Sonam was dressed in Anamika’s creation – a heavy red lehenga with ivory white floral embroidery on it.

If rumors are true, Sonam Kapoor would pick Ralph & Russo to design a few outfits for her wedding too.

Sonam has been a fashion influencer and a pro at that. Her embracing of the saree look is ample proof. It is only that we’d love to see the lovely actress more in silk saris, not just chiffons and georgettes (which is a B-town wardrobe staple both onscreen and offscreen). 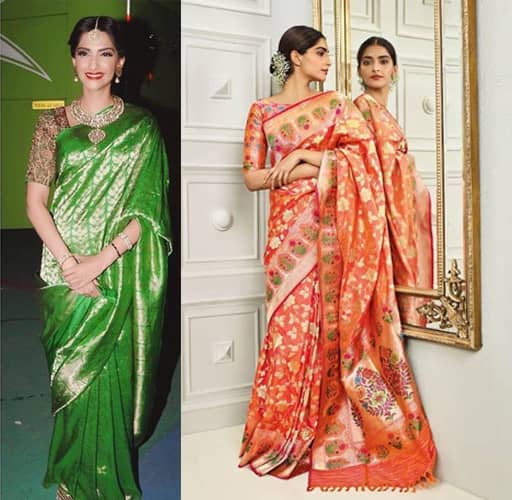 Beyond her love for pastels and bright bold colors, Sonam is very much a golden girl. While most brides love to go for shades of pinks and reds for their bridal outfit, it will be nice to see the Neerja girl revisit the shades of gold as she walks down the aisle. Because if that happens, God willing, her beau Anand Ahuja will not be able to take his eyes off her (but that is what our intention is, silly). Count on Sonam when it comes to acing the contemporary chic look. Why the traditional look, she can always go in for abstract prints in unusual shades. The blue and gold lehenga she wore for her Diwali party is an example.

Talk of Ralph & Russo and Sonam had walked down the ramp for them – wearing extravagant jewelry. So, you can trust her to carry any ethereal look with elan. 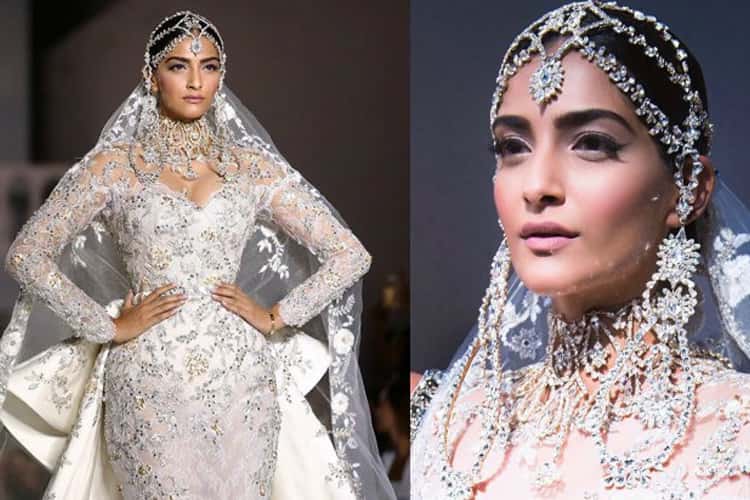 Will she work after marriage?

This is what Sonam has to say:

Whether it is Nutan, Nargis, Waheeda Rehman, Sharmila Tagore, Dimple Kapadia, Madhuri Dixit, Kajol, Kareena Kapoor Khan — they are all loved by our audience even after their marriage. So, the mindset has been encouraged by a few filmmakers and media people. But hey, there are progressive and non-progressive minds in every business. So as in our industry. We should keep working… the change will come.

I think I’ll have a wedding with only my family and close friends in attendance. I would also prefer to get married in India because it’s my favorite place in the world.

Well, the saat pheras are likely to be held at Sonam’s aunt-cum-art connoisseur Kavita Singh’s 55,000 sq ft heritage bungalow in Bandra, Mumbai. This mansion has its own temple for the nuptials to take place.

The sangeet ceremony being choreographed by Farah Khan will be held at The Leela where Arjun Kapoor and his cousins will put up a special dance performance.

The haldi and mehendi ceremony will be held at Sonam’s apartment in Bandra Kurla Complex. The reception will take place on the same day as the marriage pheras at a hotel in Mumbai (possibly St. Regis where Virushka had their reception do). There could be a Delhi reception as well to cater to the groom’s family and friends.

The guest list will be a dream come true as it will include names like Deepika Padukone, Karan Johar, Ranbir Kapoor, and political honchos.

That completes our bulletin on Sonam Kapoor’s wedding.

What are your guesses about Sonam Kapoor’s bridal outfits? All I can say is that I can’t wait to share the pictures of Sonam’s bridal avatar with you guys. Keep reading for more fashion updates. And do give us your likes and comments.
Images Source: instagram.com/sonamkapoor

The History of Women’s Swim Suits