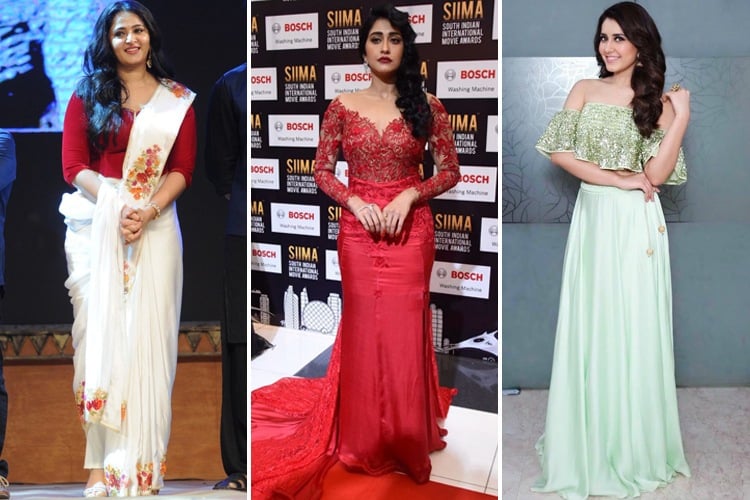 Our celebrities are hatke – both off-screen and on-screen. Whether they are shooting in a desi or foreign locale or making a public appearance for an event/social cause, both ways they put in best of their swag.

Is that the case only in Bollywood?

NO, NO, down south in Tollywood, the actresses are giving tough competition not only to their southern contemporaries but Bollywood gals too when it comes to making style statements.

Such is the fashion one-upmanship that some of the successful South Indian female actresses have shed their ‘next door’ image and evolved to become Tollywood’s ‘it’ style icons.

Let’s check out the Top 10 Tollywood Actresses who have stepped out of their comfort zone and experimented with their looks and wow factor.

In short, their STYLE EVOLUTION or style-check will surely be a treat for your eyes!

This actress-cum-new bride was part of only two films that released this year. BTW, she has signed a few interesting projects (including Rangasthalam and Mahanati) this year.

From her BRIDAL look to her public appearances pre-marriage, there is no denying how hot and mesmerizing Samantha Ruth Prabhu is.

This Tollywood star’s marriage to Naga Chaitanya (s/o actor and entrepreneur Nagarjuna) is still fresh in our minds. It was a destination wedding held in Goa in October this year.

Samantha wore a lehenga from Koëcsh (under the banner of Kresha Bajaj, Samantha’s designer friend) for the Mehendi.

For the Hindu wedding, Samantha wore a vintage South Indian woven sari (belonging to the grandmom of Naga Chaitanya) and traditional jewelry which comprised of waistband, bangles and various necklaces in gold and kundan.

For the Christian ceremony, Sam wore an off-shoulder gown also by Koëcsh.

In August this year, at an event celebrating National Handloom Day in Hyderabad, Samantha was spotted in a B & W ikat sari by Preetham Jukalker with silver earrings from Sangeeta Boochra. And she looked fab!

Her June diary this year was packed-to-the-hilt.

Samantha attended the Filmfare Awards South this June in an Anamika Khanna sari-inspired dress. For the finishing touches, her signature cape and hair updo added to her awesomeness.

The same month, she inaugurated a clinic in Hyderabad dressed in a Kalki cotton kurta and matching pants. The tassel detail on the shoulders, the fringe Aquazzura sandals, and Suhani Pittie earrings upped her style quotient.

The now Mrs. Naga Chaitanya attended an award function in Chennai this June. Dressed to kill she was in a cotton handloom sari by Archana & Puneeth. The striped sari was paired with a high-neck blouse, the Sangeeta Boochra necklace, and belt.

Samantha counts stylist Neeraja Kona as her best friend who helps her put her best fashion foot forward no matter what the occasion is.

When asked about her style quotient, Samantha says “Audrey Hepburn is my style icon and I strongly believe that whatever she wore, reflected her style and character. I have always preferred a very classy and minimalist look. Earlier, I used to wear saris, but of late, I’m experimenting with other ensembles”.

In short – Samantha Ruth Prabhu’s bridal look, red carpet attire, and casual outfits are what DREAMS are made of.

With over 50 films under her belt, Kajal Aggarwal is no less than a Superstar. The year 2017 has been terrific for this actress with films such as Khaidi No. 150 (a big hit) followed by Nene Raju Nene Mantri, Vivegam and recently Mersal.

At the Zee Golden Awards 2017, Kajal Aggarwal looked a DIVA in a stunning black Mark Bumgarner bodycon gown which had a flared hem and dramatic ruffles at the back. Stylist Ami Patel teamed the gown with a pair of danglers and a ring.

As for the make-up, artist Vishal Charan chose a creamy palette for a dewy sheen and put a dash of nude tint on the lips. Kajal got the Best Actress award and aced the fashion game too that starry night.

Rakul is a name today, not just in the Telugu film industry, but also in Tamil, Hindi, and Kannada cinema. Her face is instantly likable and charming.

How gorgeous she looked when she inaugurated South India Shopping Mall store dressed in pink and purple pattu saree (from the label) paired with traditional jewelry from Manjula Jewels. A center-parted twisted bun and flowers finished her look!

The actress promotes her upcoming movie Khakee in a floral print monochrome outfit paired with beige pumps and high ponytail.

Fondly called ‘Milk Beauty’ or ‘Tammy’, the Bahubali actress needs no introduction. Her traditional and modern avatars are so varied and dynamic, they blend in effortlessly.

For Baahubali 2: The Conclusion promotional event in Hyderabad this year, Tammy wowed the audience with her simple and sublime designer ensembles.

Check out the ethereal beauty in an Abu Jani-Sandeep Khosla creation. This quirky and vibrant lehenga was paired with a white peplum jacket. Styling was done by celeb stylist Sanjana Batra.

A pair of artistic golden and white statement earrings, hair left open down to the shoulders and a nude makeup rounded up Tamanna’s look for the day.

Now this young and pretty daughter of famous actor Kamal Haasan has done us proud….proof?

Check out the doe-eyed beauty’s ‘debut’ at the 70th Annual Cannes Film Festival. She walked the red carpet in style for her film Sangamithra.

As Maharani Devasena in the blockbuster Baahubali 2: The Conclusion, Anushka Shetty delivered a fearless performance. She could do that off-screen too with her sartorial experiments while she promoted her film. Here are some classy examples from her 2017 style diary:

Anushka Shetty welcomed the spring season with her white saree which stood out with floral appliqué work. The actress chose to drape the sari in a different way and teamed it with a zippered red blouse. Loose waves formed her hairstyle. As for jewelry, a pair of statement earrings and a bangle was enough to make a point. Makeup was flawless with nude glossy lips and a small red bindi.

The lady has acted in Telugu, Kannada, and Tamil films. At the tender age of 9, she started anchoring for Splash, a kids’ channel. Here is how her style file looks.

In a monochromatic pant skirt and a crop top by Nishka Lulla for SIIMA 2017.

You recall her as Hrithik Roshan’s leading lady in the film ‘Mohenjo Daro’, right? Well, Pooja Hegde has also starred in Telugu films (and mainly). This beauty was crowned as the 2nd runner-up at the Miss Universe India 2010 competition. Thereafter, she started acting in films.

Here she is in a burgundy lehenga from the house of Jade by Monica and Karishma. The Occasion? The grand closing ceremony of IFFI 2017. Styling was done by Tanya Ghavri. Neckpiece and matching earrings courtesy Shree Paramani Jewels. Statement ring from Gehena Jewellers. Make-up artist and hairstylist Nidhi Agarwal.

At the Vogue Beauty Awards 2017, Pooja looked ethereal in a white shimmery Hasan Hejazi gown with black panels at the shoulders. Glittery ankle-strap sandals rounded up the look.

Another stunning model turned actress of the Telugu film industry, Raashi has tasted success in Tollywood. She made her Bollywood debut with the critically-acclaimed film Madras Cafe and forayed into the world of Telugu cinema with the film Oohalu Gusagusalade (2014).

This Indian model turned actress has acted in many Telugu films. In 2017, Mehreen made her Bollywood debut in the film Phillauri which had Anushka Sharma as the main lead.

Mehreen managed to scorch the ramp at the Woven 2017 Fashion Show.

Now your quiz for the day – which Tollywood actress stood out the most in making a fashion impression in 2017? Please type the name in the comments section below. And also pick your fashion tips from these ladies for the next year. See ya!

The Age Of Blake Lively’s Style – Yeah, Even This Is...

Anushka Or Kriti? Who Splashed A Better Floral Prints Fashion?