Camera friendly and confident to the T, Kriti Sanon is considered as one of the most promising actresses in tinsel town today. Just two films old, this model turned actress appears to be packed with the potential of becoming the superstar of tomorrow.

Starting her Bollywood career with Heropanti, Kriti hit a jackpot with her second project in Dilwale.

With just two movies, this leggy lass has definitely cemented her positioning in the industry.
While on-screen, Kriti lights up the screen with her cuteness, off-screen, Kriti slays us with her statement style.

Kriti Sanon’s personal style is chic, contemporary and totally effortless. Be it the red carpet, or street style, Kriti gets all the attention from the fashion stalkers. Courtesy her height, and that cute face, the woman rocks almost any outfit and gives it an instant upgrade adding her element to every ensemble she carries.

Being well acquainted with her wit for fashion, last year Kriti Sanon launched an affordable western clothing line of her own, Ms Taken, for the aspirational and independent Indian woman. Now that career move came too soon.

If rumors are to be believed, Kriti Sanon is currently dating one of Bollywood’s most eligible hunk, Sushant Singh Rajput, who is also her co-star in her next release, Raabta.

After a whole year of fashionable appearances, we can’t wait to see Kriti’s promotional closet for her next release, Raabta.

To make the wait worth it, here’s a quick throwback to all that we loved from Kriti’s fashion diaries.

Manish Malhotra kick started the first weekend of the year hosting a dinner welcoming the International Vogue Editor, Suzy Menkes in Mumbai. A bunch of his BFF’s from Bollywood were invited to this private soiree. On the list of invitees of Bollywood’s favorite designer, was Kriti Sanon. The lady dressed up well for her evening, taking the glam quotient of the party to an absolute high with her berry red dress lined with layers of fringes. The belt cliched at her waist gave more definition to Kriti’s framework. Stylist Sukriti Grover styled up this beauty with jewelry pieces from Isharya and a pair of brown Aldo heels. Straightened tresses and a luscious berry pout completed this perfect 10 look. For the Stardust Awards 2016, Kriti opted to dress up in a silver sequinned strapless gown from Papa Don’t Preach. The lady conquered this red carpet look, baring her broad shoulders and that thigh-high slit, giving us quite a peek of her perfectly toned legs. Stylist Sukriti Grover and Style Cell, amped up Kriti’s look for the award night rendering some added sparkle with a pair of chunky earrings from Minerali store, a handcuff from Prerto and rings from Aurelle by Leshna Shah. With that side swept braided hair updo, Kriti gave a head-turning appearance. 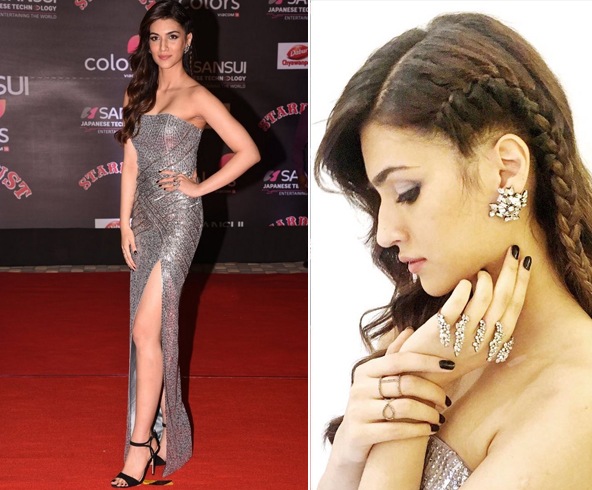 At the star-studded awards night, the StarScreen Awards 2016, Kriti made for a striking red carpet appearance, dressed up in a fiery red floor length number from designer label Swapnil Shinde. Her plunging halter neckline coupled with that slayer back, totally caused temperatures to soar. Contouring her curves to perfection, the gown with that trail gave Kriti one of her best looks. Stylist Sukriti Grover styled up the diva the minimalistic way, adding more stars to the star with a pair of golden Valliyan earrings. Kriti sealed her look with a mid-parted sleek hair updo. 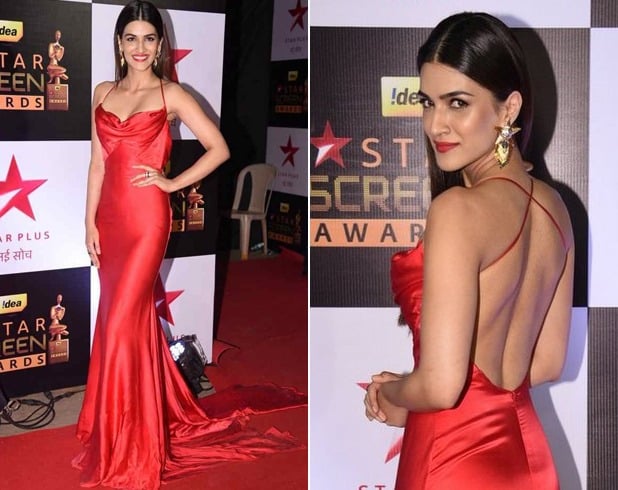 For the 50th birthday bash of Bollywood’s favorite designer, Manish Malhotra, Kriti Sanon went all bling. Looking like an absolute stunner, the lady completely justified the party’s theme which was Gold and Glamorous. With help from stylist Sukriti Grover, Kriti dressed up rather bohemian in a velvet dress from Free People. Ditching the lowers, Kriti completed her outfit with a pair of currently trending knee high boots in black from Steve Madden. She completed her party look to perfection with a black Aquamarine choker. 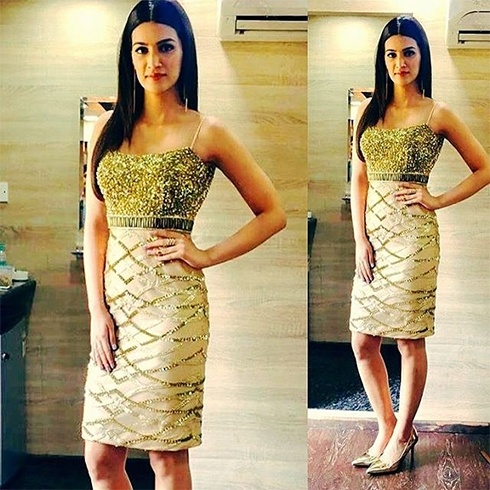 Kriti gave us some serious envy with her emerald spotting. For a wedding bash, hosted by the Ambanis, Kriti dressed up classy in a lehenga and jacket set from designer Anju Modi. We have to admit Kriti worked this rich hue with much panache. Stylist, Sukriti Grover accentuated her desi style with a cocktail ring and a pair of jhumkis from Amrapali. With a mid-parted braided bun, Kriti completed her ravishing winter wedding look. Diving deep while taking a metallic plunge was Kriti Sanon, attending the Conde Nast dinner. In a golden slip dress from the house of Monisha Jaisingh. The high slit dress did all the wonders and Kriti looked smoking-hot wearing the tightly pleated dress. Her stylist, Sukriti Grover, further amped the glam quotient giving Kriti a black choker from Valliyan and rings from Aquamarine and Shop Bansri. For her footwear, Kriti chose a pair of black Dune London heels. A befitting Judith Leiberny clutch and a sleek ponytail hairstyle took her look to all new highs. Kriti’s street style is fascinating. The woman delighted us with her athleisure look for the Gionee store launch in the youth capital of India, Pune. Kriti made an uber chic statement wearing track pants from Topshop and a white vest from Forever 21. The highlight of this look though, was the layering Kriti resorted to. Stylist Sukriti Grover layered her basics with a unique military print bomber jacket in the shades of blue from Topshop. Kriti Sanon heightened her punk quotient wearing accessories from Topshop and knotting up her tresses in a cool top knot bun. Kriti finished off her appearance with a yummy shade of candy pink for her pout. Kriti played some black magic in an all black look for the launch of Gionee smartphone, S6S. Stylist Sukriti Grover dressed up her muse in a sheer black top from Zara. With ruffle trend on a high, Kriti wore it well. Sukriti paired her top with a pleated jogger fit pants from Zara. For accessories, the stylist turned to Topshop elevating her black outfit with a pair of white starry earrings and rings. We are all hearts for the feathered footwear, Kriti sealed this look with. 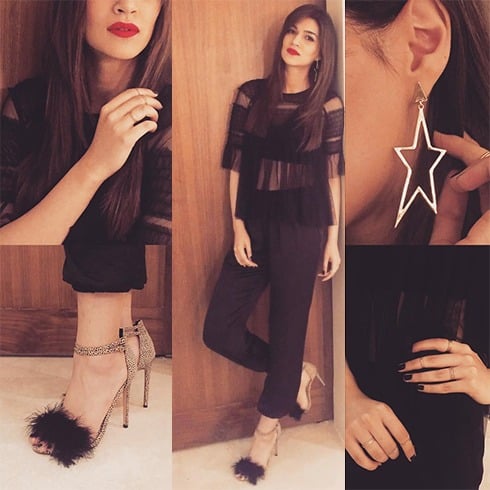 That was about Kriti Sanon’s style in the year 2016. With Raabta slated for a mid 2017 release, we hope Kriti will use these six months to surprise us with some of her experimental fashion moves.

The Starry Affair Of The SAG Awards With The Best Dresses...

Fashionlady - January 28, 2014 0
You never got tired of watching reruns of "Friends" and its theme song was your favorite hummable tune. Funny quotes and hilarious situations from...