The inspiration for fashion is endless. The cultural rich heritage of India not only influences Indian fashion designers, but has also been a source of inspiration for international designers. The much-in fashion apparels today are either the revival of the vintage patterns or the enhanced versions with slight doses of modern elements.

If we take the example of saree, it is the most versatile fashion ensemble one can go for today. While its existence is time immemorial; the new age fashion designers have taken the saree to an edge whilst retaining its aesthetic values. From dhoti sarees and saree gowns to lehenga sarees, the saree has undergone a massive makeover to suit the modern taste.

In a bid to explore other inspirational elements, I tried debunking Indian history only to gather 7 historical legends, whose dressing sense has left enduring marks in the annals of the history. The traces of their existence are not only illustrated in the history books, but are also found in the Indian fashion archives.

Continue reading FashionLady, the leading Indian fashion blog to find out how these historical figures, right from 16th century to 20th century, have inspired the Indian fashion world to the core! 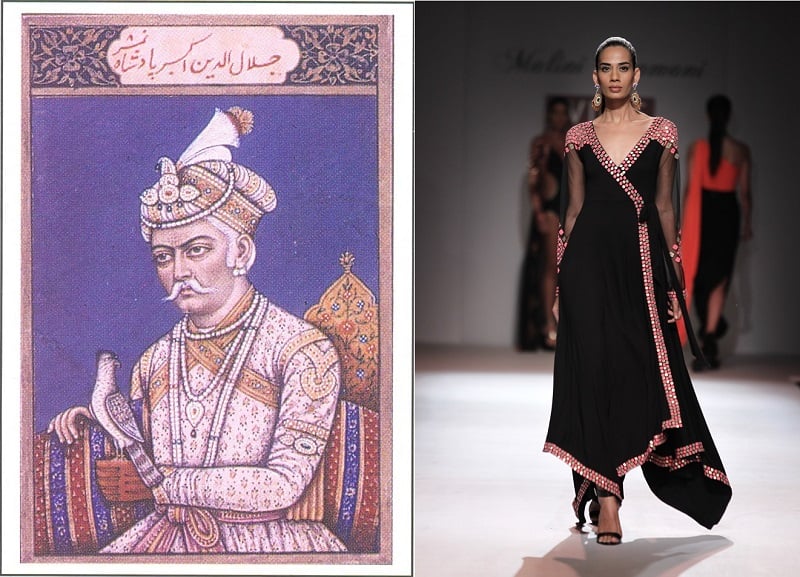 The 16th century Emperor Akbar, who had ruled the Mughal dynasty during the 1500’s, was probably the first Mughal ruler to dream of united India with unification of culture and religion.

As a direct reflection of his efforts in unifying both Hindus and Muslims, the clothes adapted during those times reflected the fusion of both the cultures, which later on, seeped into various cultures through time.

The Angrakha or a long formal frock, with ties at one side, became popular, thanks to the emperor. It was Badshah Akbar, who first introduced the concept of tunic and churidar for men, which has today become the favorite of several designers. The 16th century Mughal empress, the wife of emperor Jahangir, who is also believed to be the same Anarkali, with whom Salim aka Jahangir was madly in love, is the inspiration behind this apparel.

History reveals how the empress had preferred simple and modest garments and how her garment has become immortal in the history of Indian fashion.

Her eponymous gamrent, anarkali, which she used to wear was a long, flowy kurta fitted on the bust and flanked by large pleats dropping towards the legs like an umbrella.

The revival of this histrionic outfit was made in the epic movie, Mughal-e-Azam and it had instantly become a trending outfit in the 60’s. From the last one decade, it has been ruling the women’s ethnic wear section and will remain for years to come for its magnum opus and regal style.

While the patterns and designs of this ethnic wear have evolved with time; the basic elements still allures dating back to the Nur Jehan days, the first Mughal emperor to ever rule the nation behind the throne. 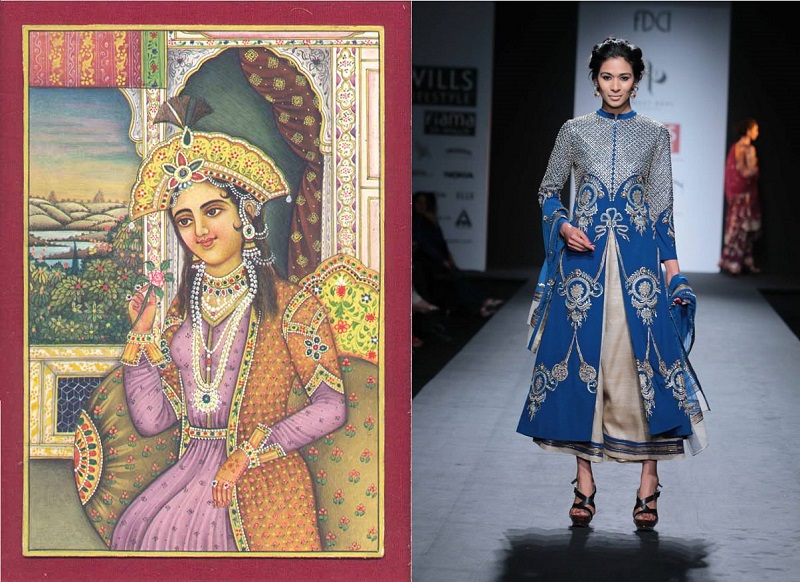 It seems the Mughals have put huge influence on the Indian dressing style. Empress Mumtaz Mahal, consort of Shah Jahan, was the epitome of beauty just like her mother-in law Nur Jehan.

The beautiful Empress was well aware of her fashion sensibilities, that is evident from her numerous paintings that stand witness to her dressing sense. Her fashion sense was an inspiration to many. The empress was seen wearing a short-sleeved long or short jacket over her kurti or saree that she wore. While she wore it to maintain her modesty and sophistication, the jacket soon turned out to be a fashionable piece.

These days, the jacket is a hot number on the fashion runways. 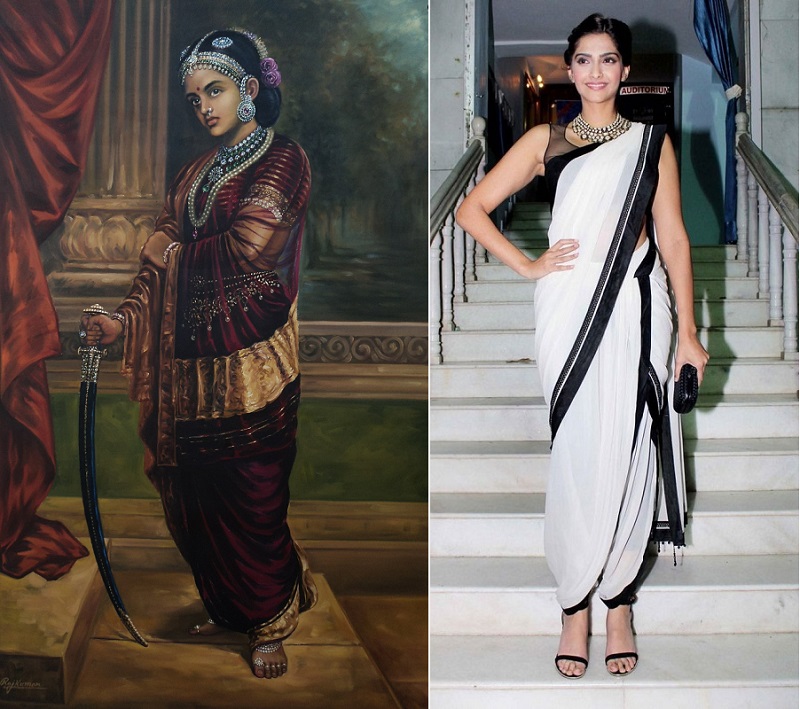 Rani Lakshmibai is one of the most courageous female rulers, India has ever had. Apart from the ferocious ruler, Rani Lakshmibai’s dressing style also stood out from the rest.

The Queen, who had also to fight against the British along-with Gwalior troops, was dressed in a saree draped around in dhoti pattern. The cotton or muslin saree, which she wore, was draped in the typical Maharashtrian style known as ‘Nauvari saree’. This made her comfortable in battle movements from horse riding to fighting against her enemies.

The Rani preferred minimal accessories such as a pair of gold earrings and a small bindi, which created an impact on her personality. 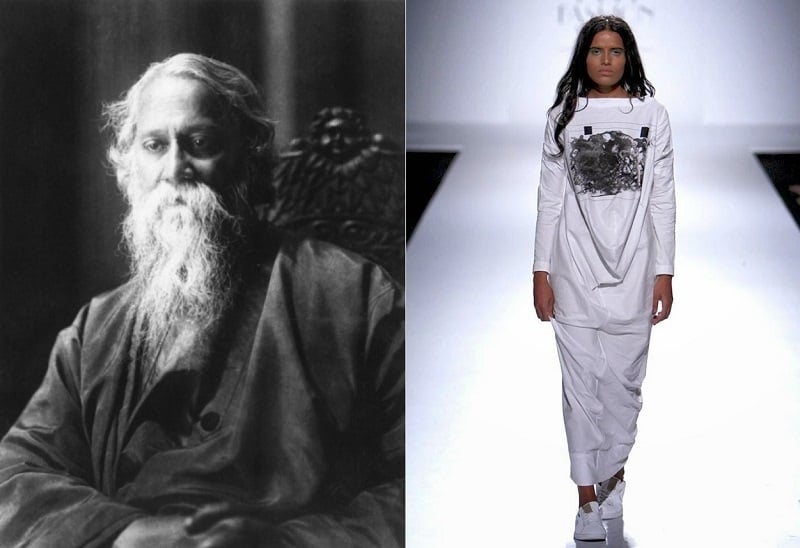 During the early 20th century, India was gifted with two foremost intellectuals – Noble laureate Rabindranath Tagore and the revolutionary Aurobindo. Every character Rabi Thakur has conceived stood out from the rest. Not only were his writings and paintings were unique; even his dressing style was distinguished from the crowd.

His personal style of robe was a fusion of Sikkimese bakhu and Japanese kimono.

Even though the robe was not prevalent in the fashion scene for a long time, it has certainly made its way into the present day trends. Thanks to the designers who have revived this spiritual wardrobe element. The full-sleeved one-piece attire is usually worn loosely without any frills or strings attached. The simplicity if the fusion robe is something that made it look royal and divine. Did you know India’s first Prime Minister was the major inspiration behind The Beatles’ outfits?

Today, the who’s who of the fashion industry swears by it. The Nehru Jacket, which came into being in 1940’s became hugely popular as this band collared and hip-length closely fitting coat was introduced by none other than Nehru himself and thus got its name – Nehru jacket. 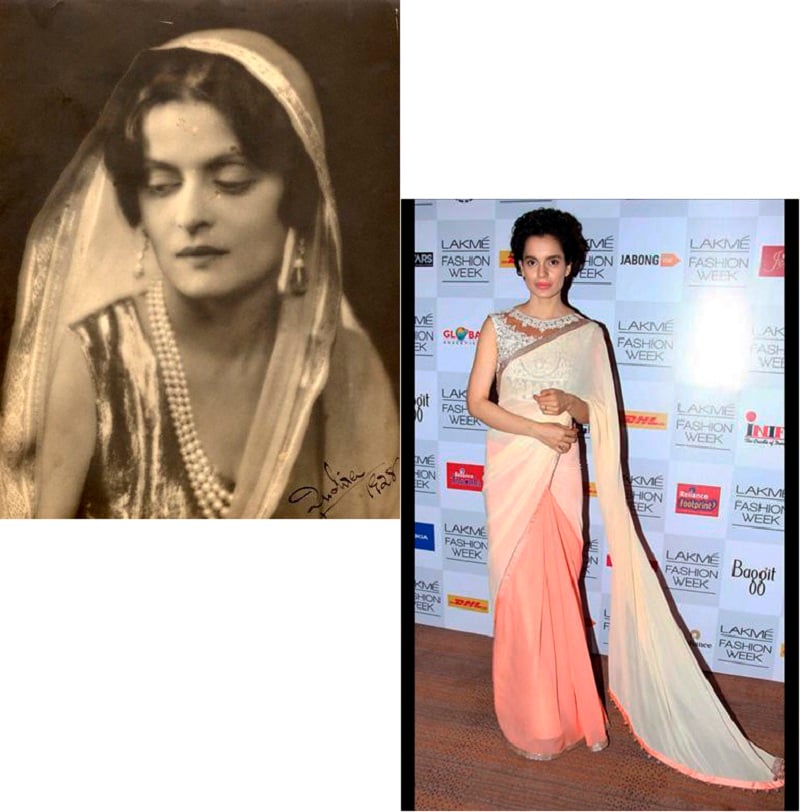 Maharani Indira Devi, mother of Gayatri Devi, not only passed her charm and poise to her daughter, one of the world’s most beautiful women but even passed down her fashion sense. Gayatri who was the epitome of beauty and style then passed down her mother’s fashion sense to the entire nation and world over. The trousseau, which was draped with poise by the royal ladies, was mostly French chiffon.

However, it was not the fabric but the signature formula which Indira Devi had introduced was the secret sauce to looking sensual.

Indira Devi had first worn chiffon in Paris. It was the material which won her heart. While it came with the width of 34 inches, it was the Maharani who insisted to make it to 46 inches and thus, chiffon saree was introduced.

Chiffon saree, which is an integral part of saree fabrics, is today worn with distinct style across the globe.

Hope you enjoyed this post by the Indian fashion blog, FashionLady!!

Lipsticks For Monsoon: A Pop Of Color For Those Dark And...

These Bollywood Ladies Are Giving Us the 70’s Feels