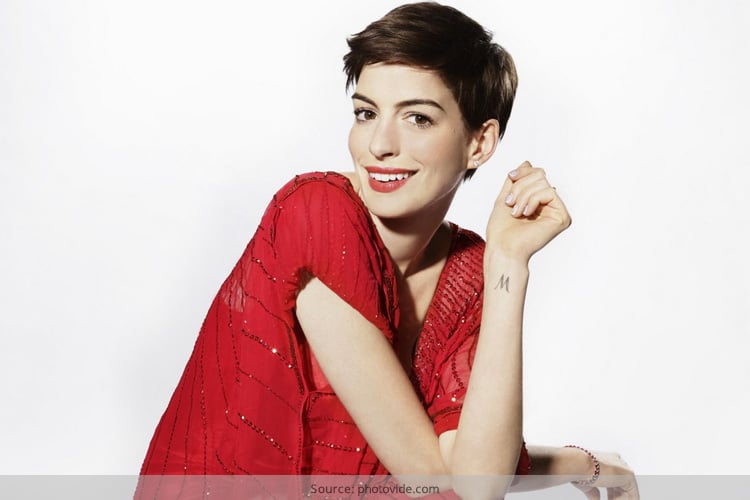 Well known for her doe eyes and full lips, Anne Hathaway looks pretty even without a trace of makeup. She is often seen running errands in LA or New York in a simple hoodie, flats, and jeans and still looking gorgeous. She is not a big fan of makeup and loves stepping out without it most of the time!

Anne Hathaway has always been a lithe and slim actress and seldom have we seen her gain weight in her 15-year career. Even when she was carrying her child, the media went berserk trying to see how much weight she gained! But Anne didn’t gain a substantial amount.

The only time Anne lost an insane amount of weight was when she was cast for Les Miserables. She was to play the role of a prostitute who was dying of tuberculosis. Not only did Anne chop off her signature brown locks, she lost 25 pounds by virtue of a very strict diet. Some newspapers reported that she was having less than 500 calories every day and surviving on just two dried oatmeal pastes in a day. However, she still believes this was one of the toughest roles she ever had to play and thinks that it was grueling.

Anne doesn’t have a set workout plan or diet plan and she is an on and off vegetarian. She is not an enthusiastic weight-watcher.

Though she is not a big fan of the gym, she has been snapped several times by the paparazzi visiting yoga centers. She loves doing a bit of pilates to keep herself fit and fine.

Kick Off The Valentine Fever With 20 Heart Tattoos

Folks, You Will Go Bananas With Banana Peel Uses