Ever since Emma Watson earned fame playing Hermoine Granger in the Harry Potter movies, she has become quite the muse of the fashion world. The British actress and activist’s fashion profile has been admired for her chic, off-duty style and flawless red carpet appearances. Her impeccable stand-out ensembles from top designers have become her signature style. Also, the actress constantly advocates about using sustainable fashion in an effort to make smarter choices.

Born in Paris, France Emma Watson is the proud daughter of Luesby and Chris Watson. Both her parents were lawyers. Until the age of five, Emma lived in Maisons-Laffitte, near Paris. When she was still at a young age, her parents separated. Then the actor moved to England for staying with her mother in Oxfordshire and spent the weekends in London with her father.

From the age of six, she was keen on becoming an actress and took training from Stagecoach Theater Arts, Oxford Branch, which is a part-time theater school. 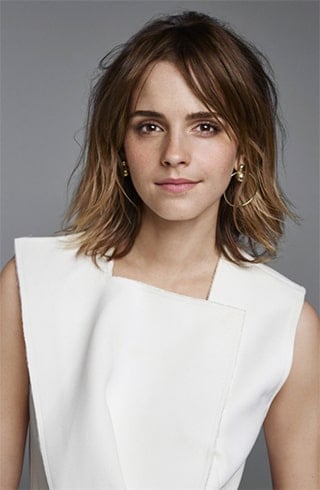 Now let’s take a look into Emma Watson personal details, and know more about her passion, weight, age, in detail. Scroll down and enjoy! 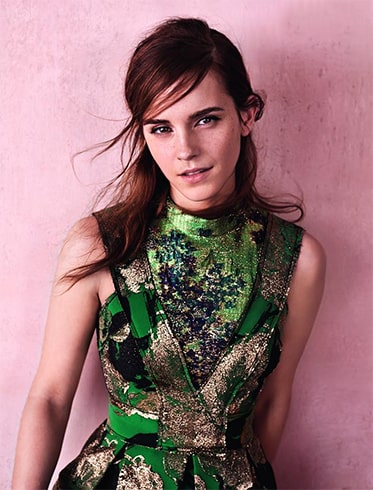 After school, Emma took a year gap to shoot for Harry Potter and the Deathly Hallows starting February, 2009. Later, she continued studies at Brown University, Rhode Island. After 18 months of studying at the University, she decided to defer her course for one semester. Then she went to Worcester College, Oxford, in 2011-12 as a visiting student. It took Emma all of five years to graduate with a Bachelor’s English degree from Brown University. 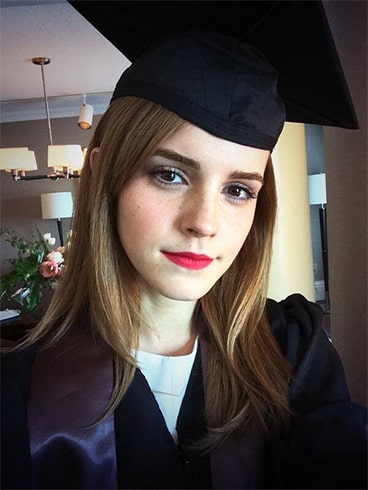 In 2013, Emma also took a certificate course in meditation and yoga. She also attended the Stagecoach Theater at the branch of Oxford to train as an actress.

Emma Watson is best remembered as Hermoine Granger in Harry Potter. She appeared in all the eight Harry Potter movies (2001-2011) with earnings grossing around $60 million. Emma Watson Net worth is in millions and she has earned every bit of it with immense hardwork. The English actress is also an activist and has often spoken at public forums.

Here are the list of titles and awards that Emma Watson has won so far: 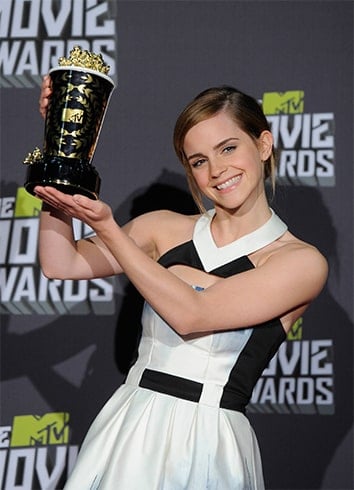 Emma Watson mostly posts about her OOTD posts on Instagram and tags the designers she is wearing. Did you know, while endorsing Beauty and the Beast, the actress has also made a separate Instagram account for sharing fashion credits about every single ensemble she wears. 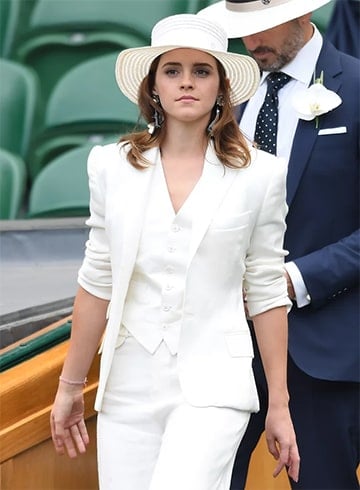 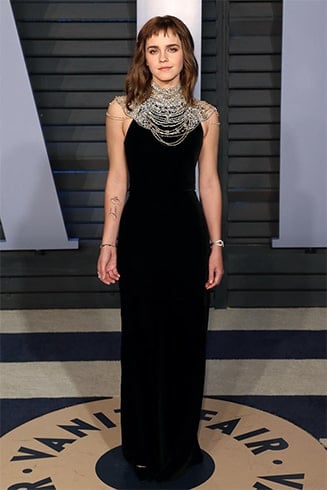 3. In A Hand Embroidered Gown:

Where: Paris, The Circle, Photo call 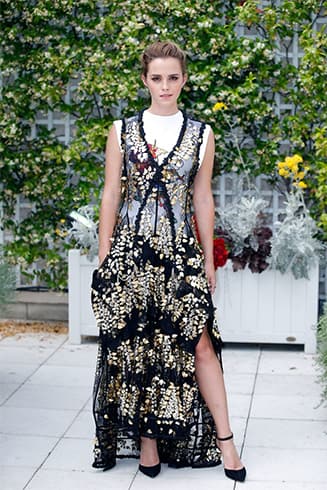 Where: Beauty and the Beast Press Tour 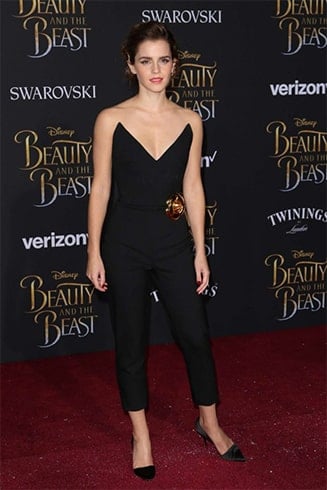 Where: Shanghai Premier of Beauty and the Beast 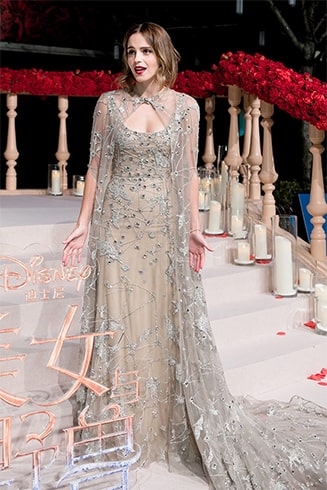 8. Sustainable Ensemble Made From Plastic Bottles:

Where: Paris, France, Beauty and the Beast Press Conference 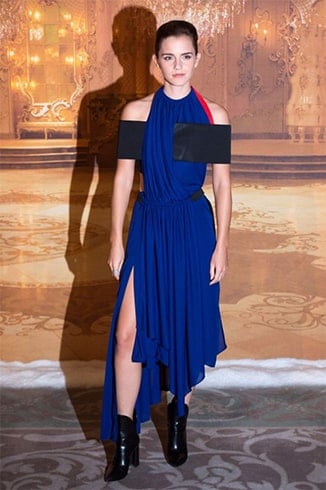 Activist and actor, Emma highly supports sustainable brands and transparency. And she is particular about what she puts on her face and body. Here we share Emma Watson makeup tips:

Emma makes it a point to cleanse her face every night. Even after she returns from late night shooting, she cleanses, tones, and moisturizes before bedtime. Her favorite products are Évolué Gentle Cleanser and Firming Toner, MV Organics Rose Plus Booster, Rose Soothing and Protective Moisturizer, 9 Oil Cleansing Tonic, Évolué Resurfacing Grains.

She is a natural red head. To avoid her hair from getting brassy she uses vegan brand Maria Nila Sheer Silver Shampoo and Conditioner. Emma also uses the brand’s Masque on her hair and leaves it on for 20 minutes. For styling, she also loves John Master Organics Hairspray, Alchemy Grapefruit Hair Remedy, or Acure Argan Oil or simply coconut oil.

She works on maintaining a natural look on a daily basis. Her favorite products to use are Red Pomegranate-Cheek and Lip Stain from The Body Shop, RMS UN Cover-up Concealer and Powder, red lipstick from Lily Lolo and Inika, Jane Iredale liquid eyeliner and clear brow gel, Tata Harper, Bronzing Cheek Tint, and mascara from DHC.

Emma takes a bath daily, sometimes even thrice a day. She uses Epsom salts and oil once in a while. However, her favorite is C.O Bigelow Apothecary Cold and Flu Soak. Another brand that she loves is Lola’s Apothecary milk bath with rose petals. Other brands that she uses are French Girl Org Polish, Agent Nateur No.3, Weleda Sage Deodorant, and Soapwalla’s Deodorant Cream.

Emma loves fun nail colors. There are several nail brands that she loves including Kure Bazaar and Floss Gloss. She particularly loves the El Capitan shade from Floss Gloss.

Emma recalls the first time her dad bought a perfume when she was 11 from a perfume making factory from France. 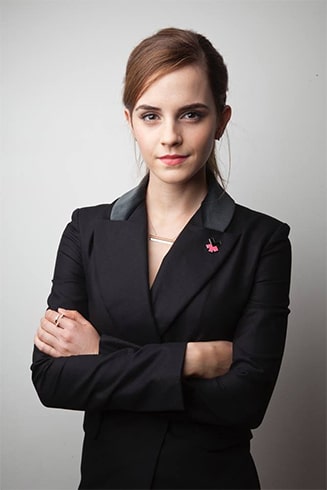 The key to Emma Watson fitness secrets are an intense 30 minute workout focusing on strength training, stretching, and yoga. She also practices stability ball exercise for toning her obliques, mixed with cardio, ab exercises, and walking. 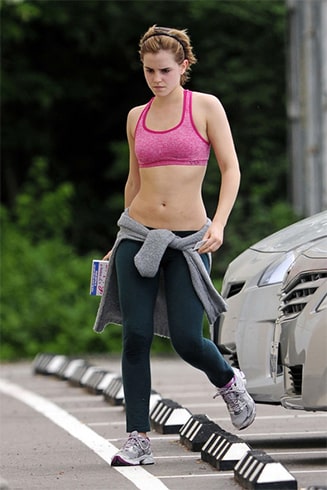 Emma Watson does not believe in diet but rather advocates healthy living. She also avoids junk food, saturated fats, and salt. Her diet comprises of veggies, salad, lean meat, and fruits. She balances it off with proteins, fiber, carbohydrates, and Omega-3 supplements.

On cheat days, she allows herself to have pasta, chocolates, and bagels. Here is a breakdown of what Emma Watson loves to eat in a day:

Emma Watson does not limit herself from eating what she wants. Rather she tries to maintain a diet rich with nutrients like unsaturated fats, whole grains, and lean proteins.

Although she does not follow recipes, Emma still loves cooking.

Her favorite food choice is Mexican and she can’t stop obsessing over it. For breakfast, she treats herself to salsa, scrambled eggs, and guacamole. After that, she also cooks tortilla.

Emma treats herself to cheat days while indulging in pasta and pizza.

Her favorite drink is gin and tonic. Could be more British, right?

Emma loves Nutella. On her birthday, she treated herself with a breakfast of strawberries and Nutella.

When Watson takes a few too many drinks, then she has a quick fix to it. She makes an English breakfast of baked beans and sausages as her hangover cure. 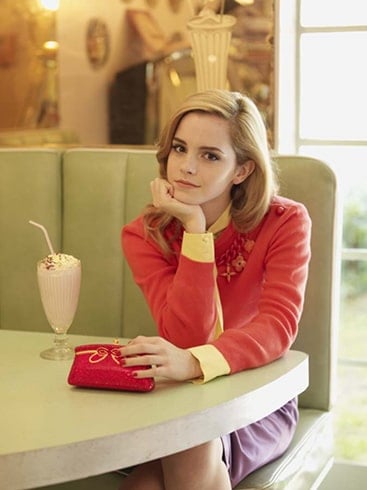 Previously, Emma had endorsed beauty brand, Lancôme. But she is now turning down all beauty campaigns or brands which do not celebrate all women.

Emma Watson has widely spoken for women’s right and child education. Marking herself as a true feminist, the actress has stood for what is correct. The achievements made by her till date is commendable. Here is a breakdown of her work:

Here are the links of Emma Watson social profiles:

Emma Watson fashion profile is much loved and talked about. The reason why is because she stayed true to herself. Hope you loved going through her looks as much as we did.

Write in to us in the comment section below.

Best Office Exercises to Stay in Shape at Work

Neha Dhupia Maternity Fashion Is All New Moms-To-Be Can Wish For!