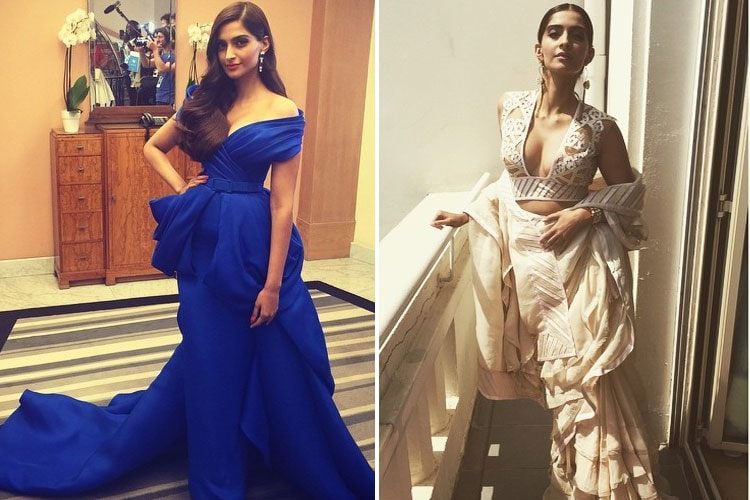 So!! Our Fashionista has finally reached Cannes and has made her first red carpet appearance on Saturday. We documented her journey so far via her Instagram posts and we were quite amazed at the amount of luggage that she was carrying.

Why? Well,because it was just a two day program and carrying 8 suitcases and additional carry-on items seemed a bit too much for us. But when we looked at her outfits, we then got to know why she had to travel with an army of suitcases!

Keep reading below to find out what she did between landing at Cannes to present moment!

It was all work for Sonam at Cannes. So she decided to make the best out of the situation and had some fun with her first appointment of the day. She had to do a photo shoot and also shoot some DIY videos with L’oreal Paris.

For that event, she wore a dress by Ulyana Sergeenko, teamed it up with Jimmy Choo heels and completed her look with textured and messy up-do.

After the shoot, she rushed to the press meet and killed everyone with her gorgeous adaa! Wearing a ruffled saree by Abu Jaani and Sandeep Khosla, Sonam Kapoor looked like a total beauty! Her jewellery was by Suhani Pittie. We love!!

Then, it was finally time to make the red carpet appearance and she totally killed it!! Ink blue dress by Ralph and Russo, jewellery by Chopard and shoes by Gisuppe Zanotti completed her look. Her hair were done in side swept waves and make up was on point with red lips! What’s not to like. What do you guys think of this look? Over-whelming or under-whelming?

After an eventful night, Sonam Kapoor spent the night in her doodle Pj’s by her favourite PJ brand – Dandelion Dreams. Doesn’t this picture look dreamy?

P.S – Can you spot her Ralph and Russo dress?

After her morning routine, it was then time for her to get ready for the next event. Even when she went to get her hair and makeup done, she was spotted in a beautiful floral flowy dress. This girl has got some major style!

The next event was Chef Vikas Khanna’s book launch. Since it was at the Indian Pavilion, Sonam Kapoor decided to take the glam quotient up a notch and opted for a cream A-line dress by Ashi Couture and paired it up with strappy heels.

Chic And Stylish Pool Party Outfits You Must Own This Summer

Most Women Admired In The World

Bringing To You The Best Of The Final Looks From Cannes