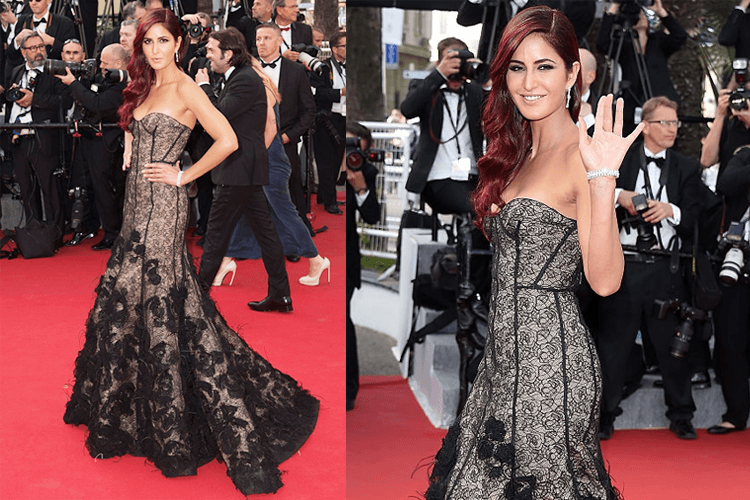 We have been talking about this day for ages, and now that it has finally arrived, we are so much at ease. Katrina Kaif is making her debut at the Cannes Film Festival this year, and we are all apprehensive about it. What would she wear? Who will do her makeup? Who will style her? How’d she look?

Because making your debut at Cannes is a BIG thing. Not everyone has the privilege to do so. When it comes to Cannes, Aishwarya Rai and Sonam Kapoor at veterans at it. They can walk down the red carpet in rags and still look gorgeous! We wonder how both of them will up the glam quotient this year.

Anyway, back to the topic at hand, Katrina Kaif made her red carpet debut at Cannes last night and boy did she look beautiful?!

Wearing a dangerously low neck lined Oscar De La Renta gown, Ms Kaif owned the red carpet. Added to that dress were her bright red hair, complementing her entire look! Her makeup was done to perfection and we totally loved the look!! The only accessories on her were diamond earrings and a big diamond bracelet. Can’t say we don’t like it! She was styled by Anaita Shroff Adajania

Kat also socialised with other celebrities who were endorsing L’oreal Paris. Here’s a picture of Ms. Kaif and Julianne Moore.

Now that is done, do you guys think the dress looks a bit familiar? Back in 2013, when Aishwarya made an appearance on the Cannes red carpet, she wore a similar looking dress by Elie Saab couture and looked gorgeous!!

Anyway, so this was all about Katrina’s red carpet debut. The gorgeous lady also made a press debut earlier yesterday and looked fabulous in a white-and-black Milly cut-out dress. Oh-so-sexy!! This time as well, she was styled by Anaita Shroff Adajania.

What do you guys think of her looks so far? We know we are extremely pleased! Wonder what will happen when Sonam Kapoor and Aishwarya Rai will touch base. It’s gonna be red carpet wars!! Prepare yourself ladies!

P.S – Did you guys read about Kartina Kaif’s wedding plans with beau Ranbir Kapoor? Excited much? We can’t wait!

Luxe Aari Work Designs And Outfits To Try At Weddings

10 Long-Sleeved Kaftans That You Should Own

Simple Tips on How to Slim Fat Thighs