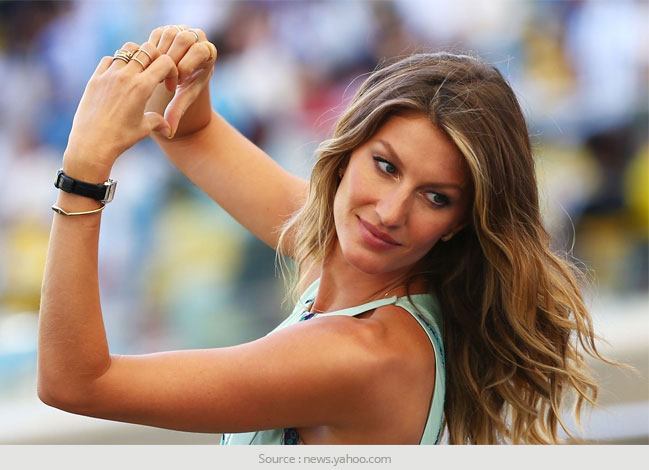 The “Messi Vs Germany Team” was definitely a match worth watching. Germany definitely knew how to keep Messi under control and tried their best to defend the goal.

After a long 112 minute wearing night, Germany seemed focused on re-enacting the Ryder Cup at Brookline in 1999. The Champions sure made it tough for Brazil at the semi-finals and made sure their name was engraved on the Trophy for the 4th time. A sure inspiration to many, to put their best foot forward with smart thinking and best qualities.

FIFA World Cup final had to declare Messi as the “Player of the Tournament.” How could I forget to mentionMiroslav Klose’s new record of 16 goals that beats Cristiano Ronaldo’s score of 14 goals scored in an earlier game?

Let’s look at some celebrities who made it a point to watch the Finals at Rio de Janerio’s Estadio Maracana on July 13th, 2014.

L: Rihanna attends the Finals played between Germany and Argentina at Rio de Janerio, Brazil.
R: Tom Brady and Gisele Bundchen at the Maracana Stadium for the FIFA Finals.

David Beckham with his 3 sons. Surprisingly, it was their first Football outing as a family.

L: Shakira with son Milan, and singer Ivete Sangalo on-stage at the closing ceremony of the World Cup 2014.

KAKA and Mick Jagger at the FIFA World Cup Finals.

Did you also wish to be at Brazil to enjoy the game? How did you enjoy Germany’s win? Tell us in comments.

In The Stars: Nail Art Designs Based On Your Zodiac