She participated in Ponds Femina Miss India Indore in 2013 and was the declared the first runner-up. She developed an avid interest in modelling. She did many commercial ads and then films happened. The innocent face of this Bareilly-born lass has won many hearts and fan-followers. She has carved a niche for herself in the field of entertainment. Her smile is her best accessory. So is her hot bod. She considers Priyanka Chopra as her role model. Let’s know more about Disha Patani fashion profile. 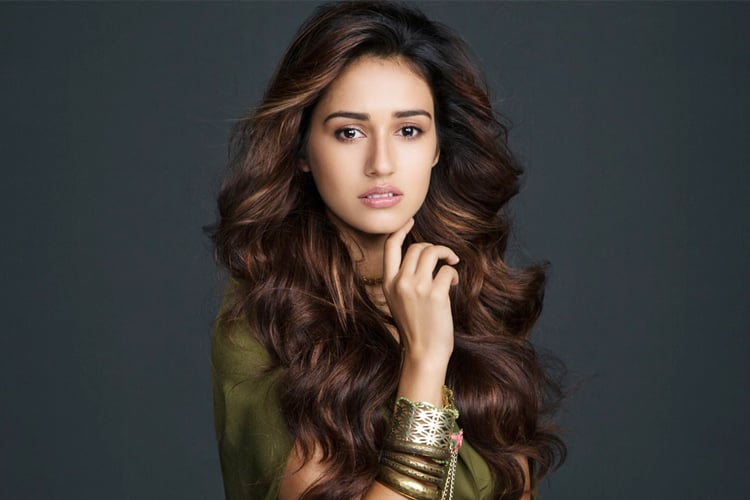 Let us start with Disha Patani Biography. She was born to Jagdish Singh Patani, a DSP in U.P. State Police. Her mother is a housewife (name not known), Khushboo Patani is her elder sister and Suryansh Patani is her younger brother. The Patanis are upper-middle-class close-knit Hindu family. 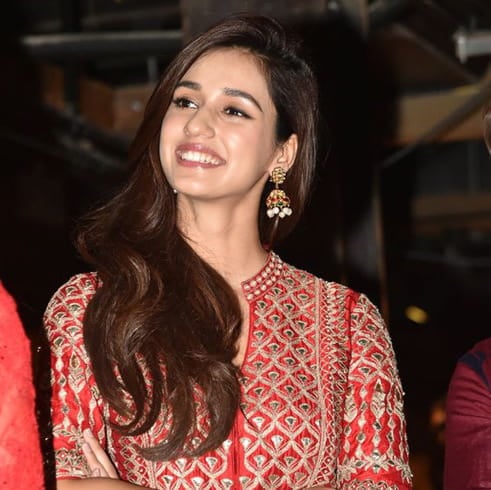 The first runner up of Miss India Indore beauty pageant, and now an established actress and model with promising films in her bucket list, Disha Patani is all set to star in Salman Khan-upcoming film Bharat scheduled for 2019 release. The Bareilly-girl has come a long way.

Here is the score card of Disha Patani in terms of awards and recognitions: 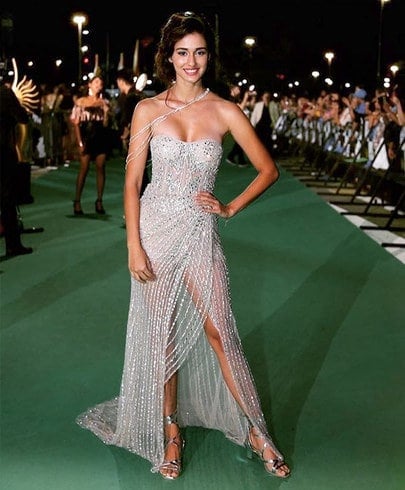 When you talk of Disha Patani fashion profile, two things are a must in her wardrobe – well-fitted shorts and a cute little dress. Her fashion statements range from cool to comfy with a touch of sport. If one were to describe the everyday style of Disha Patani, it will be ‘biker short outfit’, a term that has gained immense popularity in Pinterest’s saves this year! Her slim and athletic body is proof of why crop tops and cargo pants and bomber jackets (occasionally) are her go-to dress code for most part of the week, except her days for the shoot.

Low waisted jeans is another trend Disha has kicked off. A trend which was written off by fashion critics sometime back. Look how she pulls off the low jeans look effortlessly. Her airport look is also teeny-weeny if you go by this image below. Flaunting her toned belly, her printed tee in a knot paired with denim shorts with quirky patterns on it makes her look super cute. It’s a return of the schoolgirl vibe with a funky bracelet, white sneakers and minimal make-up. Now you know how to go about getting easy-breezy style?

Disha Patani fashion profile is incomplete without some of the best fashion moments on the ramp. She has walked for some of the finest names in the fashion business. Have a look below. 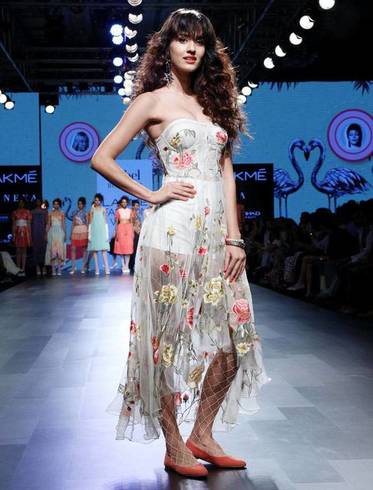 The next designer is Jayanti Reddy for whom Disha Patani walked for at the Lakme Fashion Week Summer Resort 2017. In an embroidered ink blue lehenga with matching choli and ivory dupatta with tassles and mirrors. 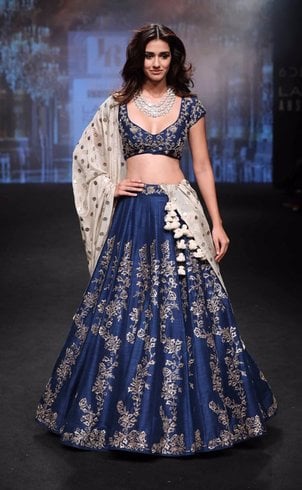 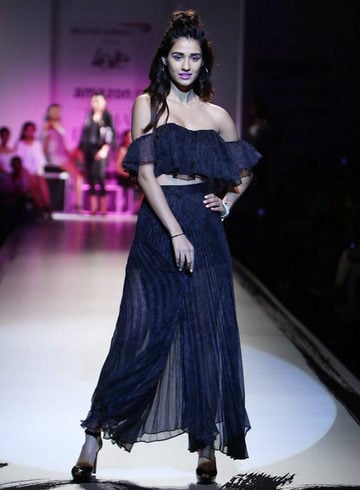 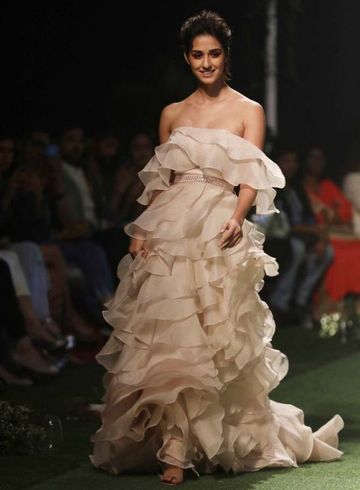 What does the ethereal beauty do to look so gorgeous?

Water and workout are the two words Disha follows to the T. For her, a good face cleanser and moisturizer is a must. Says the model-turned-actress “I believe that cleansing and hydrating is equally important, especially with the environment’s condition and the pollution around”.

Her favorite DIY beauty fix is face masks. Adds Patani “I like using face masks, especially the ones that peel off. These ones are easy to use. And for an instant glow – I like to use Pond’s BB cream. It’s easy to carry and helps to get ready for anything instantly.”

The five essentials she keeps in her beauty pouch are: Face Wash, Cold Cream, Rose Water, Lip Balm and Mascara.

Now you must be eager to know more on Disha Patani makeup tips.

She doesn’t use layers of makeup but likes to keep it simple and minimal. On Hairstyles front, Disha Patani has a fascination for trendy locks. Let’s see her hairstyle diary.

To get half pinned hair, just curl your hair with a pair of tongs. Then leave them half-pinned like the way Disha has done. You can also leave your hair open and push all of them to one side and tie it. 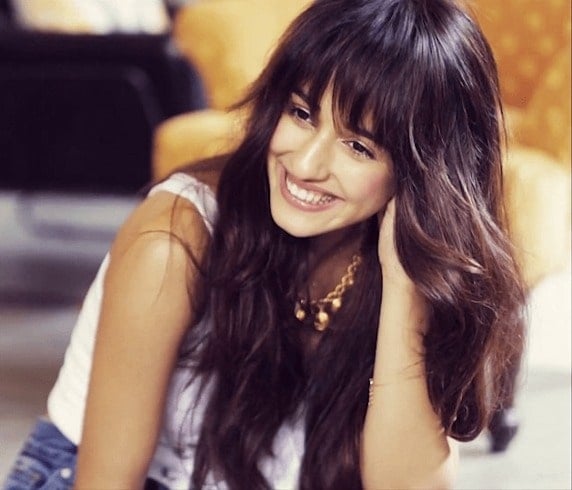 How does the Baaghi 2 star look without makeup? BEAUTIFUL! 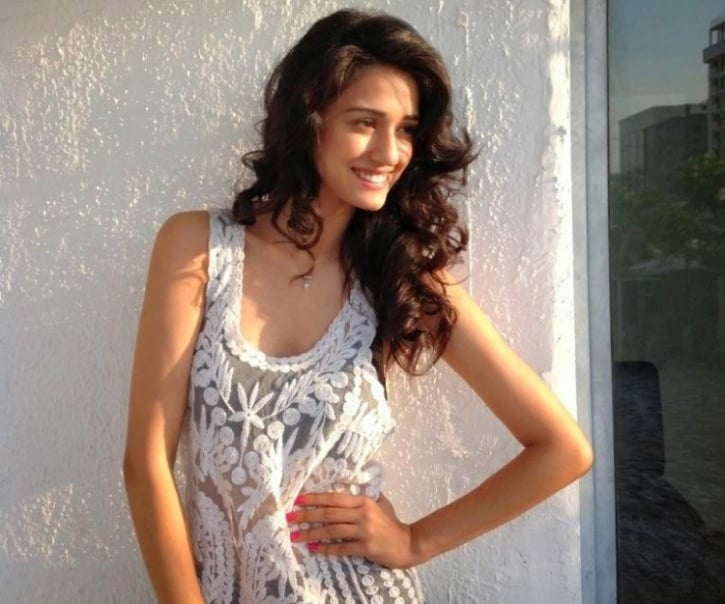 Disha is a trained gymnast and fitness freak and lives an active lifestyle to maintain an awesome figure. In 2017, Disha was seen in an Indo-Chinese film ‘Kung Fu Yoga’ with Jackie Chan where she took formal training in martial arts.

While Disha Patani height is 5 ft 7 inches, Disha Patani weight is 50kg. She has a slim physique so she looks beautiful in all attires, traditional and Western.

On Disha Patani Fitness Secrets, the beauty lass visits the gym four times a week, treadmills for an hour every day, and does cardio, weightlifting and light weight training. She also does yoga for half an hour daily.

In an interview to Vogue India, the actress revealed “I work out everyday and my routine usually involves cardio in the mornings, like dancing, kick boxing or gymnastics, and weight training in the evenings. I supplement that with a protein-carbs diet.”

As for Disha Patani diet plan, the svelte actor tells Vogue India “It is definitely advisable to cram in a small meal before a work out, consisting of some protein, like eggs. After exercising, it is good to add protein again, either through chicken, eggs or paneer.” 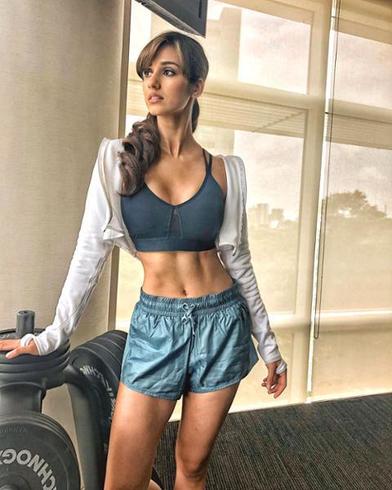 Disha Patani has the following to say about her fondness for jewelry “I like very tiny pendants and bracelets. Honestly, I don’t know about different styles because I only wear delicate jewelry…”

Patani’s take on diamonds “Personally, I like diamonds but as of now, I can’t afford to buy it and I mostly go gym and other places so I don’t get chance to wear diamonds but of course I love diamonds.”

It is heartening to note that Disha Patani bagged Fresh Face of the Year Award at NFBA 2018.

Jot down Disha Patani social profiles. You are eager to connect to her, right?

So how did you find the celeb profiling of the hot B-town star and celeb Disha Patani? Let us know in the comments below. And do share this blog in your social networks.

Jennifer Lawrence Stuns On The “Passengers” Tour And Promotions

Wear A Pretty Bohemian Wedding Flower Crown At Your Wedding