The night that stands out in both music and fashion just rounded itself up and we are already counting days down for next year’s event. The most prestigious of all the music awards in Hollywood, the Grammy Awards has always witnessed some dangerously sexy dresses. What makes you think this year would be any different?

The “Hands to Myself” singer was all inspired by the signature style of Hollywood bestie Taylor Swift. After making a head turning entry at the AMA red carpet, SelGo again chose to walk the Grammy red carpet covered in glitters. This sparkly design by Calvin Klein was literally heaven sent for the pop queen. The floor length gown featured a crisscross back and sexy side cut outs. Even those Giuseppe Zanotti heels did all kinds of justice to the red carpet worthy feet. Accessories included Hoop earrings from Norman Silverman Diamonds and don’t forget the David Webb green cocktail ring which completed the outfit perfectly. To sum up, the way she looked this evening, I would forgive my man, if he cheated on me with Selena Gomez, because I totally get it. Now honestly speaking, let’s all agree that Adele is that kind of an artist who doesn’t require a stylish outfit to make her shine out in a crowd. The woman’s got amazing wind pipes to do all the talking for her. And yet she surprised us looking absolutely gorgeous in this embellished Givenchy gown. The all black number emphasized her waist, and we seriously don’t complain. Ofira Jewelry brought in the extra glam factor to round up the look. Yeah Adele….we totally hear you. Showing a little skin never hurts anyone! But here we have The Big Bang Theory bombshell pledged to kill at the Grammys. Sequins were the hit this season, and Kaley Cuoco got her share of bling too. The Naeem Khan sparkly jumpsuit on the actress, with its well-placed triangular cut at the midriff and an uber plunging neckline, could fail any theory known to mankind. She carried a champagne clutch with her and that ring party by H.Stern evokes all kinds of envy in me. The “Love Me Like You Do” singer chose to keep it a little less dramatic, however, not compromising on the classy factor. Our 29 years old held her own, at the prestigious award event. The incredible light pink Stella McCartney gown with spaghetti straps made the nominee pop out with color. But you haven’t seen anything on earth till you haven’t seen the intricate beaded back of Ellie Goulding’ dress. Yes, only Jimmy Choo heels could go with a stunner like that. She added a pinch of more sparkle with that silver ring party and diamond necklace. 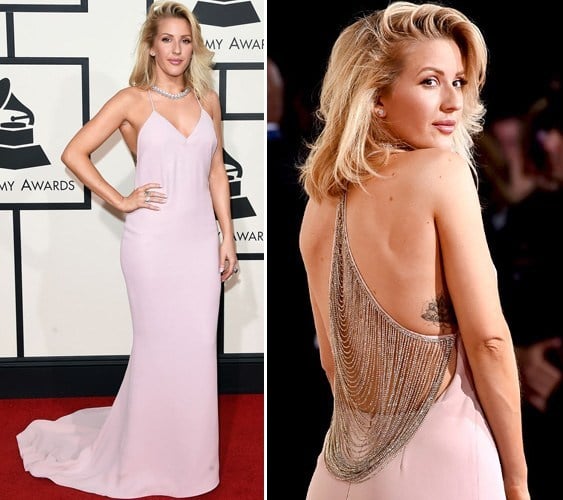 So we all know Ariana is a Diva with tons of Diva complex. So we better “Focus” on her red carpet style unless we wanna piss her off totally (see, what I did there!)! So the Mac Viva Glam brand ambassador was smoldering in an unbearably hot red number from Romona Keveža displaying a generously fluted skirt. She chose a Jimmy Choo clutch to accompany her on the red carpet that she walked in Giuseppe Zanotti heels.

No, Meghan doesn’t give a damn to the body shamers and works out a fabulous look at the Grammys 2016. The “Like I’m Gonna Lose You” singer was showing off her new brunette chopped locks and put her curves in full display rocking a sparkly black gown by Michael Costello. The dress, which was in fact custom-made for the artist with its center slit, was one of the sexiest dress of this evening. Her stylist did a wonderful job in choosing those metallic shoes and a black and gold clutch to go with the outfit. 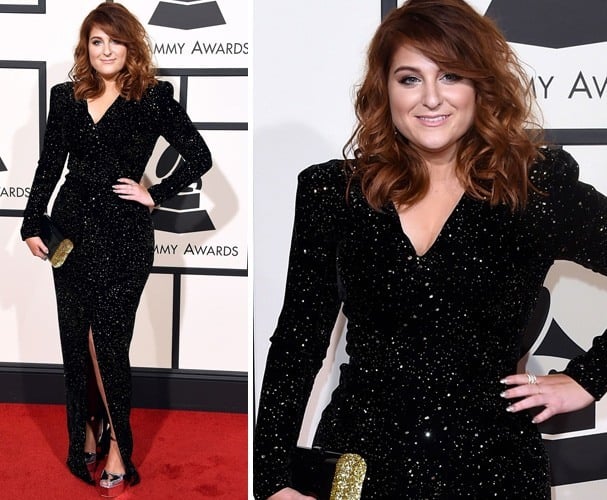 So, when we begin an article with Selena Gomez, we round it up with Taylor Swift. That is almost the rule, because these ladies are the full circle of Hollywood now. Talking about Taylor, the 26 year old gave the Grammys one of the best moments by calling out Kanye West and by looking outrageously sensational in her color blocked attire. The two piece ensemble, comprising an orange bandeau top and a pink high waisted maxi skirt by Atelier Versace was a perfect choice to show off those long legs. The sleek and sexy bob was the next thing to go down in the books of Grammy history. And if you are a shoe hoarder like me, I am sure you haven’t looked at anything but those strappy heels. 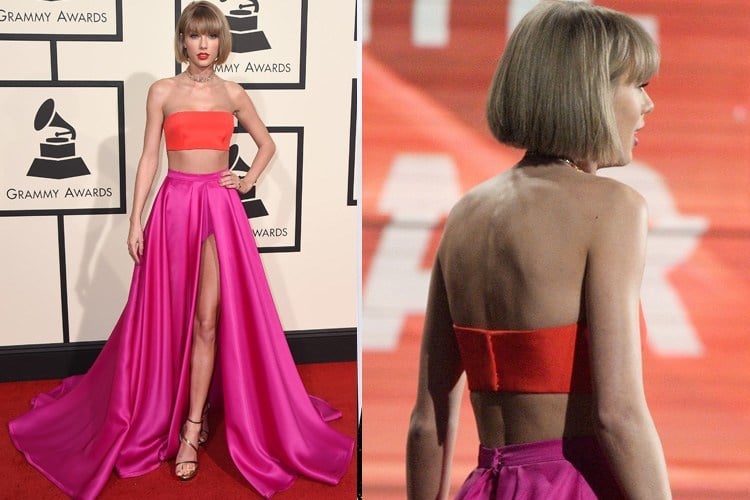 [Also Read: The List Of Attendees At The Nykaa Femina Beauty Awards, 2016]

Dazzling Chunky Frosty Nail Art For You To Flaunt At Parties

Best Face Wash For Pimples And Dark Spots In India

Does Dry Shampoo Have a Downside?

How to Wear Bling to Lunches and Casual Affairs?

Grammy Awards 2014 Red Carpet with some Hits and Misses