Indian Fashion Blog
Home Events It Rained In Los Angeles, But The Flood Was Of High Fashion... MTV movie awards just added a new wing to it and we can’t stop being crazy. MTV movie awards was celebrated as 2017 MTV Movie & TV Awards on May 7th and more additions means more celebs and more celebs would, in turn, mean more fashion on the red carpet, err… I mean black carpet. So why wait? Let’s roll it.

She is a singer and an actress, but she didn’t confuse her identities this evening. She was at the Shrine Auditorium to represent her movie and she looked every bit like a movie star in her lilac mini dress by Fausto Puglisi dress. Hailee made a smart choice by opting out of any accessories as the cut out outfit has plenty of silver embellishment to make for the bling – bling. We are loving her choice of simplistic Christian Louboutin shoes. Done with her delicate Balle, Emma brought her edgy self out on the red carpet. The one shoulder asymmetrical creation with a hint of halter neck. That sequin panel across the dress is hypnotizing, isn’t it? We are actually getting carried away by these minimalistic sandals most celebs are walking the red carpets in. 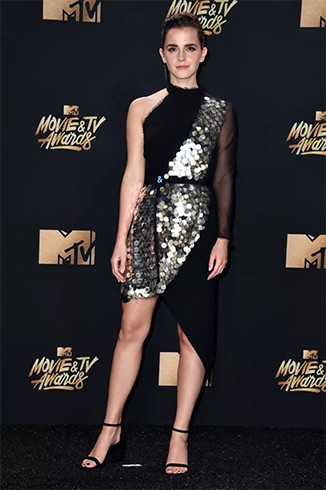 The supermodel arrives at the venue and casts a spell on the onlookers. I don’t know of anyone to have pulled off a bald head with this sensuality. The Saint Laurent look with its glistening feature was very telling of Cara’s cosmopolitan personality. Those jewels by Djula and Anita Ko couldn’t be missed at all. 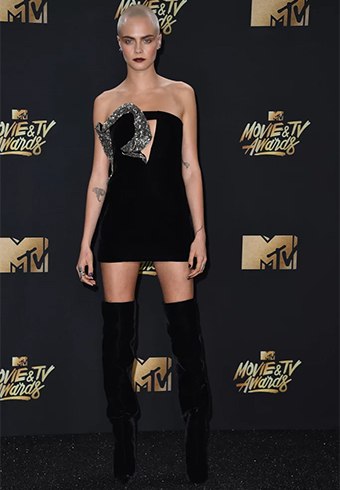 It’s hard for one to tell that she is just 20 for the maturity she speaks with on her social media and the sophistication she brings to the award shows. Though MTV Movie or music awards are always characterized by their punk rock vibe, Zendaya chose to wear a very elegant Zuhair Murad Couture dress. Moss green is not a favored colored on the red carpet, but the actress is a perfect 10 in her mess densely embroidered number. 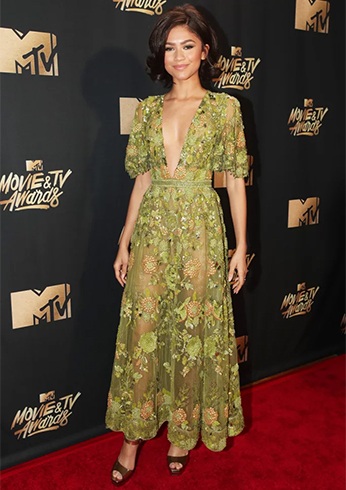 The actress and author is not known for making the most conservative arrival at any award shows. But Taraji made a statement in this shiny Emilio Pucci dress covered in rose gold sequins. Side cut outs are the go-to of the season, and she happens to be the second celeb on the list to channeling this look. The long sleeves and turtle neck didn’t leave much to be done in the jewelry department, but she did spend a moment picking a matching Casadei shoes to complete the look. 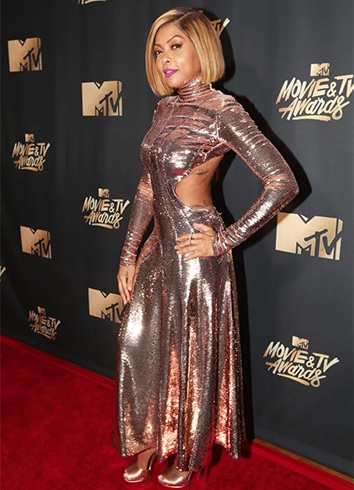 Girlfriend has come a long way since the first season of Pretty Little Liars and has evolved into one of the most idolized fashion icons of television. She made a stunning arrival at the MTV movie and TV awards in a super sexy gown in animal print. We need to give it to her stylist, despite being a full-sleeved and floor length, the waist cut outs (see, the third cut out dress on the list) and the inner boobs made a guest appearance and we don’t really hate it. 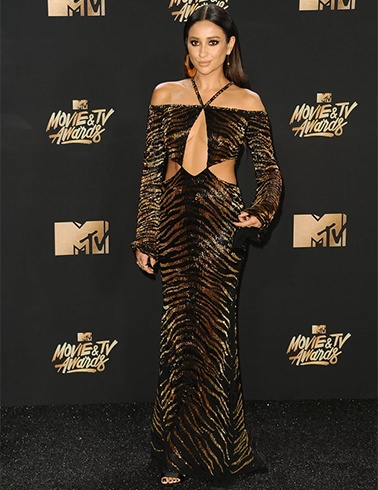 The VS model was an embodiment of everything the lingerie brand stand for. A flawless angel at the event, Jasmine picked a Lethicia Bronstein dress in royal blue lace with a sinfully long split. We saw her walking in Tamara Mellon sandals and completed the look with John Hardy jewels, and a Rubeus Milano clutch. She has sky rocketed into success and has turned into the young heartthrob across borders as adorable Hannah in the hit series 13 Reasons Why. She didn’t give up on looking adorable yet and stole every heart looking like a doll at the award show. Her red frock was very youthful and age appropriate and the makeup with gorgeously smoky eyes and plum lips was a perfect median of sultry and innocent. Baywatch actress Alexandra was spotted in a monochromatic delicate gown featuring some sky-high slit, we say the more the better. The dress by Philosophy di Lorenzo Serafini had everything that makes an award night ensemble – mess, lace, ruffles, and legs for days. And how could we not notice those Stuart Weitzman shoes? 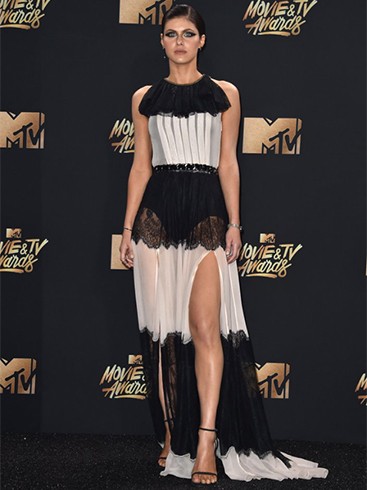 And these were our 10 picks from the glamorous night that was MTV movie and TV awards. Which of these is your favorite?