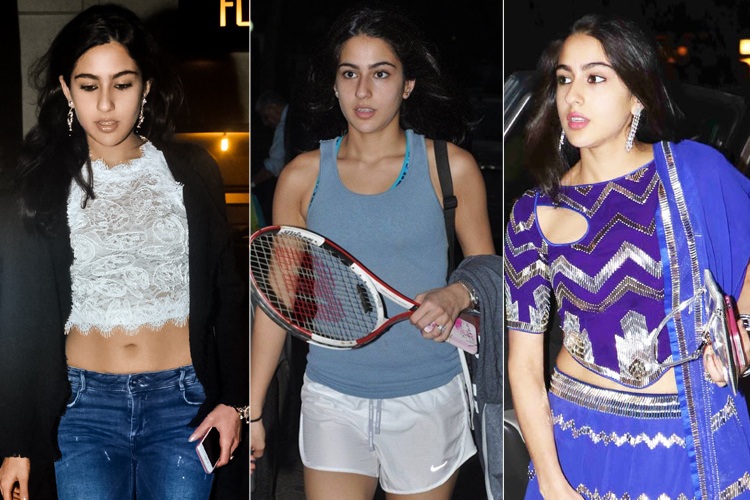 The Pataudi’s are known in the industry for their blue blood sophistication. For generations now they have graced B-town, rendering it the much needed royal touch up, with their class and taste. Starting with Mansoor Ali Khan and Sharmila Tagore, to Saif and Soha Ali Khan and now with the young blood making their way into Bollywood, we couldn’t be more excited.

Saif and Amrita Singh’s daughter Sara Ali Khan is all set to make her Bollywood debut. But even before filming her first shot ever, the princess has acquired a glamorous queen bee status in the Bollywood circuit. Spotted at all the big Bollywood parties, Sara is making all the right moves, networking with the crème-de-la-creme of B-town.

From being a chubby girl, to becoming a lady with an envious figurine, Sara Ali Khan’s transformation is not only an inspiration but pure delight. Blessed with looks that can kill, courtesy her good looking parents, Sara has already got eyes ogling at her beauty.

With a fan following of more than thousands, this Pataudi junior has got the social media buzzing with her back- to-back head-turning appearances. Widely appreciated for her personal style and candid expressions, Sara almost commands a superstar title.

Need more validation? Scroll down to see 7 pictures of Sara Ali Khan Pataudi, that prove why she is the next big thing in Bollywood.

At the birthday bash of actor Shahid Kapoor, Sara worked the monochrome magic wearing a pretty skater dress. While geometric patterns draped her bodice, it was all gingham in black and white for the flare. The elegant number accentuated the woman’s petite figure to perfection. To add some fire to the subtle monochrome, Sara befittingly paired her black and white dress with a fiery red sling which completed her look the divaliscious way. With her beautiful tresses left open falling more than perfectly on one shoulder and her enigmatic eyes taking full charge, Sara resonated a beautiful belle mirage. 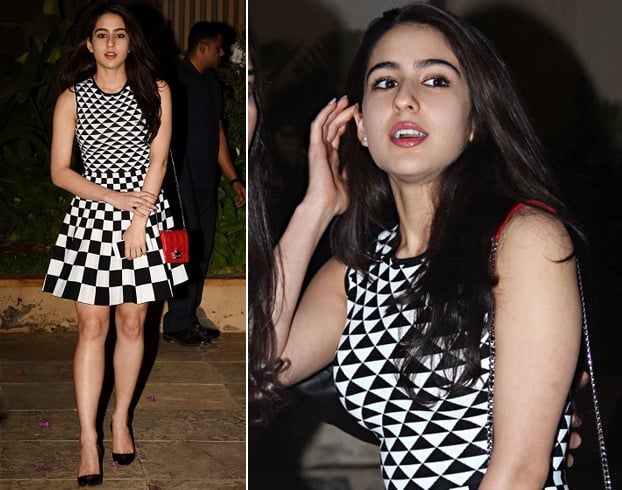 At Saif and Kareena’s Christmas Party

The new parents, Saif and Kareena chose to host a lavish Christmas party at their residence just days after their prince Taimur Ali Khan was born. Sister Sara turned up in one of her most glamorous party avatars of the season, leaving behind a host of celebrities as far as playing dressup was concerned. Wearing a lace black full sleeve top with a fitted golden mini skirt, the lady effortlessly channeled the December party vibe draped in all that sparkle. Letting her down, the woman had the shutterbugs running after her as she partied through the night. Caught by the shutterbugs while heading towards her car, Sara Ali Khan put up quite a show for all those waiting to capture her candid. What makes Sara a born star, is the fact that the lady looked smoking even when the paparazzi took her by surprise. The full sleeve black shirt well paired with season’s hottest yet sexiest denim hot pants. Completing her rockstar chic look with a pair of black knee high boots, Sara nailed this straight out of Coachella look. Pulling back her tresses into a neat ponytail, Sara sealed this one the minimal way, accessorising her outfit with just a sling and a pair of silver hoops. 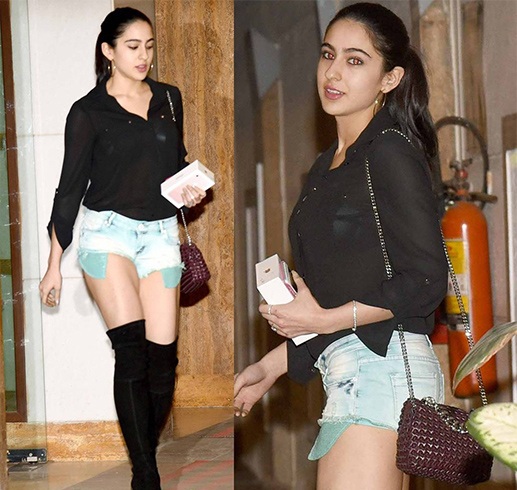 If you thought that her pretty face was her only asset, then you have not yet noticed her more than perfect midriff. A complete slayer, Sara’s abs could for once put Katrina’s belly to shame. Dressed in a white crop top and blue denim, with a black shrug layering Sara gave her fans a peek into that toned midriff of her’s. Flaunting it for the first time at Kareena Kapoor’s birthday bash, Sara took all her fans and critics by surprise as numerous cameras flashed to capture the woman’s yet another wow appearance. Now only divas know the trick of putting together such head turning appearances. There is no denying that Sara is an absolute stunner when it comes to wearing, styling and carrying western silhouettes. But what we doubted was her ability to pull off Indian outfits with equal elegance. Putting all these rumours to rest, Sara arrived at the Bachchan house for the annual Diwali party dressed in her ethnic best. Wearing a blue and purple lehenga embellished with gota work, Sara looked amazing while posing with the who’s who from Bollywood at the Bachchan’s. Keeping her look classy, Sara opted the minimal route, adorning her ears with long diamond earrings. Indeed the woman carried her Indian avatar with much panache. 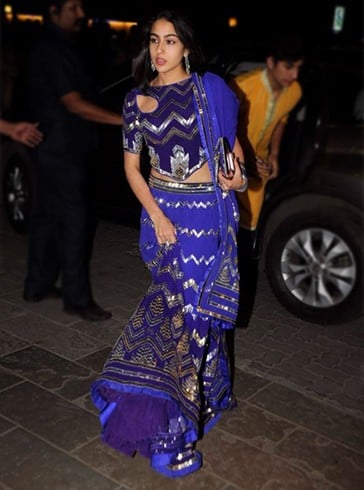 Back From Her Day’s Play

An ardent Tennis fan, the sport observes maximum weightage in Sara’s daily fitness regimen. Having imbibed this favoritism from her father, one secret to this Pataudi scion’s perfect 10 figure is diligently playing tennis. We heart this after play look of Sara, looking absolutely fierce and dedicated towards her game. A pale blue vest worn with a pair of white playing shorts, got it’s element of distinction with the pair of orange shoes, Sara wore to complete her playtime look. With the tennis racquet in her hand and her hair held loosely, the lady’s commitment to the sport was much on display.

Rumours have it that Sara will be making her debut alongside Shahid Kapoor’s brother Ishaan. We have to admit we can’t wait to catch this to-be-star on the silver screen. With her charming eyes and that confidence in herself, we are sure of being lured by this next gen superstar.

A Blend Of Sugar And Spice Were Bollywood Celebs At The...

Celebrities With Deformities: These Have Hardly Altered Their Status

Fashionlady - April 4, 2017 0
"I sincerely. believe. in the general existence of moral instinct. I think it the brightest gem with which the human character is studded, and...