Are marriages made in heaven or the filmy ones that happen in Mumbai are enough to give you a hint of the luxury quotient that goes into Bollywood weddings? 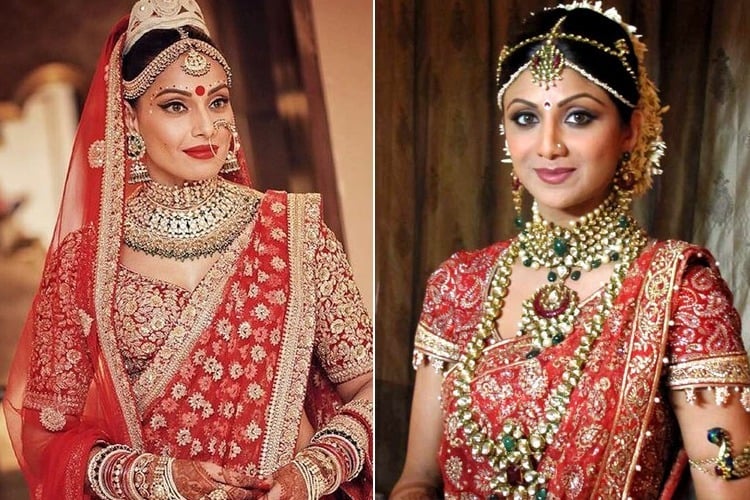 There might be countless films where Bollywood heroines have donned the bridal outfit. But nothing is more magical and awesome than watching Bollywood actress in bridal wear in real life.

Yes, our B-town brides have made up as fantastic brides dressed in Bollywood Bridal wear Looks. It seems their bridal fineries are straight out of heaven and exclusively made for keeps.

From senior actresses such as Madhuri Dixit, Kajol, Kareena Kapoor to the younger lot such as Genelia D’Souza, Preity Zinta, Urmila Matondkar and now Bipasha Basu, the Mumbai film city has given us most beautiful Bollywood brides.

Let us check out best looking Bollywood actress in bridal outfit that will leave you stunned at their beauty and looks.

2018 was the year of wedlock for Bollywood’s face of fashion and style, Sonam Kapoor. The flag bearer of fashion in India, Sonam is known for her progressive dressing. Always breaking stereotypes, Sonam’s wedding lehenga, against much anticipations, was picked from an unusual bridal designer, Anuradha Vakil. Getting the mighty red and gold back in vogue, the style maven restored our faith in the most popular bridal hue. Going unconventional with vintage textiles over a whole lot of sequential bling led Sonam to designer Anuradha, who is known for her taste in textiles.

Actress Anushka Sharma’s wedlock with Indian Cricket team captain, Virat Kohli was a much-awaited wedding of the year 2017. After years of speculation, the happy couple tied the knot in December 2017, in a close-knit romantic setup at Tuscany, Italy. Complementing her romantic wedding was Anushka’s wedding lehenga from ace wedding couturier Sabyasachi Mukherjee. Keeping in mind the lovely morning set up, the designer turned to a pretty tone of blush pink for the hand embroidered lehenga, adorned with motifs of exotic birds and butterflies. Romance at it’s best!

Shahid Kapoor’s wife, Mira Rajput may not be a superstar from Bollywood, but her personal style and fashion choices can certainly be superior to most of the seasoned Bollywood actresses. The woman has a charm and energy that is unmissable and together with Shahid, the couple is known to leave fashion imprints on the minds of onlookers. For her big fat starry wedding, Mira chose to walk the pheras wearing a soft pink lehenga from Anamika Khanna. Deriving references from the European history, the traditional lehenga was both delicate and impactful in its appearance.

Ghajini star Asin married Micromax owner Rahul Sharma in a splendid star-studded setup back in 2016. A celebration of love, the duo appeared much in love all through their functions. Keeping it classic and stunning, Asin’s wedding lehenga was picked from wedding designer, Sabyasachi Mukherjee. Classic, glamorous, and upstate was Asin’s ivory and gold lehenga, adorned with hints of maroon.

Yes, I know it’s hard to come out of the Bipasha’s wedding to Karan Singh Grover. What is equally hard to forget is the Bollywood actress in bridal wear. Yes, the gorgeous Bengali bridal ensemble Bips wore was designed by Sabyasachi.

Her baubles done by Jaipur Jewels and the wedding reception in which she changed into a head-to-toe gold look stands testimony to the painstaking labour that went into Bollywood Bridal wear Looks.

The upper half of the pyjama was made of gold net and lined with tanchoi silk brocade. The lower half was made of green and turq stripes of patched silk.

For the reception Dia looked resplendent in peach embroidered Shantanu and Nikhil lehenga which had bronze cut out work paired with a cream, gold blouse.

For the marriage, she wore a gold Sabysachi lehnga. As for the jewellery, the pop of green emeralds against the gold looked super and the rust dupatta on her head completed her bridal look so very well.

For the reception, Soha wore a plain gold choli with a gulabi pink lehnga designed by Sanjay Garg.

She is so lovely looking, that she steals the heart even in her non-bridal looks. But when it came to tying the knot with Riteish Deshmukh in Marathi style, the beautiful Genelia was a sight to watch in her bridal saree designed by Neeta Lulla.

The eldest daughter of Hema Malini and Dharmendra, the beautiful looking Esha Deol wore a bright looking red and gold lehenga which was designed by Neeta Lulla.

And what was so special about the wedding lehenga? Well, it was made by combining three heavy Kanjeevaram sarees ordered from South India. What complemented the bridal attire was the traditional temple jewellery in gold.

Looks like an engagement ring worth three crores wasn’t enough for Shilpa Shetty. Because her burgundy and red Bunt-style wedding dress designed by Tarun Tahiliani had almost eight thousand Swarovski crystals sewn into it, plus strings of gold and silver. She also sported heavy stone and gold jewelery and braided her hair but in a typical Mangalorian style.

The nine-tier cake weighing 80 kilos at the reception was like an icing in the cake.

A lot of money went in to strengthen the security measures to keep the media out, but the expensive red and gold bridal saree worn by Ash could not have been hidden from public eye.

For her wedding, Aishwarya wore Neeta Lulla deisgned golden yellow Kanjeevaram sari that had Swarovski crystals and pure gold threads. Ash even decorated her braided hair with flowers and 22 karat gold jewelry. Plus she wore 22K gold and emeralds armband.

Daughter of former Karnataka minister Jeevaraj Alva, Priyanka tied the knot with Vivek Oberoi, son of Suresh Oberoi in a Tarun Tahiliani costume that had 14 colours on the panels with peacock motifs all over. She wore gold heirloom jewellery studded with radiant rubies too.

Dhak Dhak that she is Madhuri Dixit broke a million hearts when she married Dr. Sriram Nene in a hush ceremony. As for her wedding reception, she looked regal in golden ethnic wear that had elaborate and intricate work on it. Her net dupatta, matching gold jewellery, and beautiful bangles on her wrists made her a gorgeous dulhan.

Daughter of famous film star of yesteryears Tanuja, Kajol tied the knot with her actor husband Ajay Devgan in a typical Maharashtrian ceremony. Kajol was dressed in a green saree and her traditional jewellery comprised of nath, green chooda and vaaki (popularly called armlet).

It is heartening to know that Bebo wore the same bridal outfit that her mother-in-law Sharmila Tagore had worn at her wedding. It was a traditional wear heavily embroidered with gold zari.

Now tell us which Bollywood actress in bridal wear appealed to you the most and which costume would you like to wear on your bridal day.

Benefits Of Hyaluronic Acid For Skin And Health