The 18th Mumbai Film Festival, JIO MAMI in association with Star, took off with a bang with the who’s who of Bollywood in attendance. Adding glamour to the opening night was the venue itself, The Royal Opera House in Mumbai. The only surviving opera in India, which was once the cultural heartbeat of Bombay, was restored recently and played host to a gala evening after a long period of 23 years.

Jacqueline Fernandez was the designated host for the night which marked the opening of the Film Festival that promises to showcase 175 films over a period of a week. Among the films presented, 13 foreign languages and Oscar nominations are also scheduled to be showcased. The festival will open with Konkona Sen Sharma’s directorial debut, A Death in the Gunj and will close by the 27th of November.

The opening evening honored excellence in cinema by awarding all the deserving performers.

The celebrity beauties dressed up for the opening night and sashayed on the JIO MAMI red carpet with much panache.

As a representative of the JIO family, Nita Ambani stuck to her ethnic roots for the opening night of the Mumbai film festival donning an all-black floor length ensemble with heavy embroidered patches. A pair of earrings, and with that ever glowing face, Nita declared the festival open. Kiran Rao made for a charming appearance at the JIO MAMI red carpet in a monochrome dress. The strappy details on the color blocked escapade looked interesting and complimented Kiran’s persona. With her cheerful smile, nerdy glasses and neutral heels the lady carried the look with confidence. As one of important members of the Mumbai Film Festival, we have to admit, Kiran played a befitting dress up. 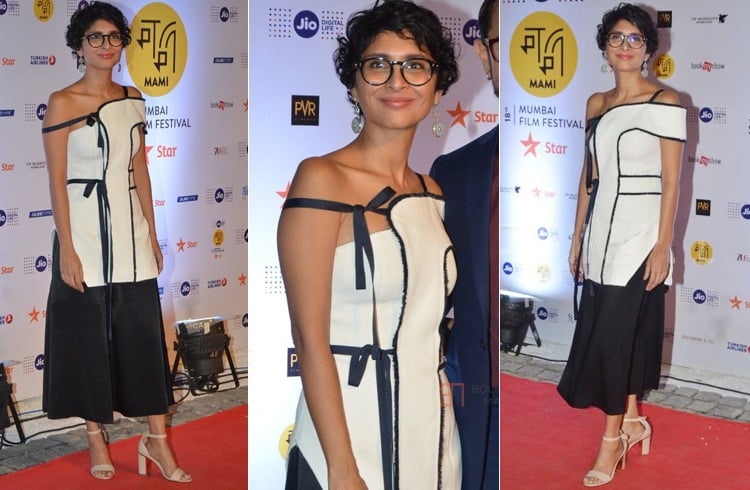 In a black floor length layered with a black embellished asymmetric layering, Shabana Azmi ruled her cult look. The black on black look was in perfect sync with the synergy of the JIO MAMI opening night. Shabana rounded up her look with a beautiful bun and walked the red carpet with her head held high. 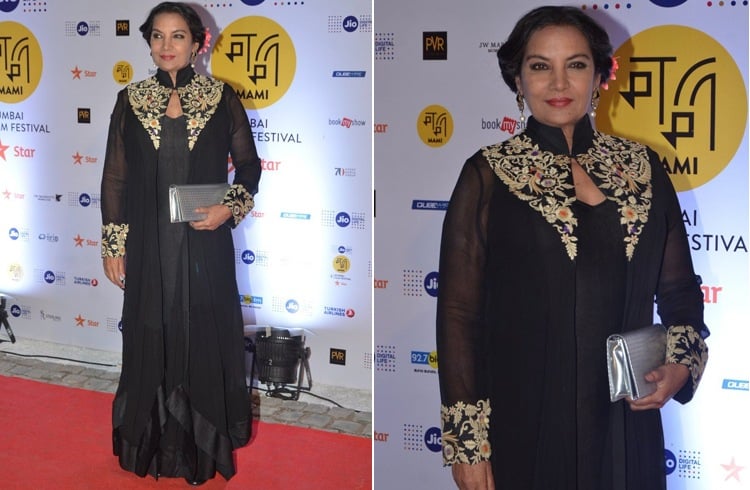 Ace director Zoya Akhtar was also present at the opening night. The director is known for her off beat youth films, and made sure that her look for the Mumbai Film festival was equally off-beat. Color blocking in a grey top with a maroon floor length skirt, Zoya swayed on the red carpet with her girl gang. 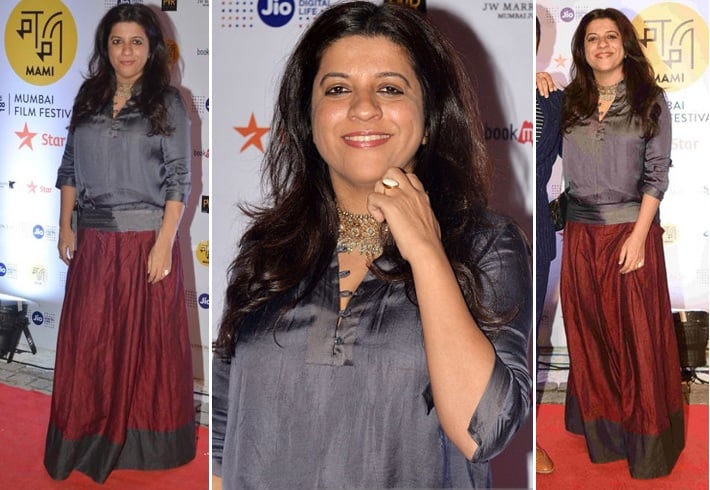 Director Reema Kagti opted for some power dressing suiting up for the opening night of JIO MAMI. The lady slayed with her androgynous attire paired with brown oxfords. 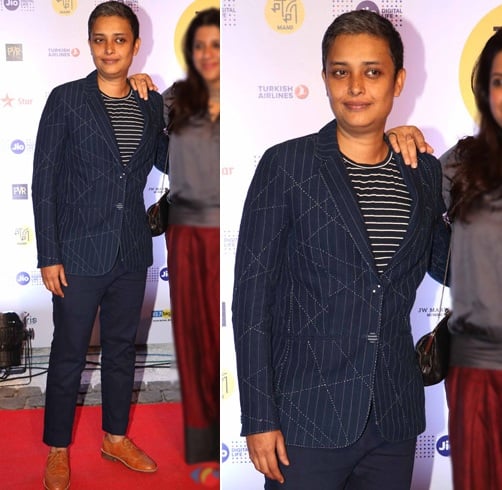 For the opening night of the JIO MAMI, actress Huma Quereshi donned a desi contemporary concoction from the house of Payal Singhal. In a peach cape and lehenga set with blue brocade crop top, Huma made for a pretty appearance. A pair of chaandbalis, a gold kada and her tresses wrapped in a cute bun, added to the Indian aesthetics of this look. 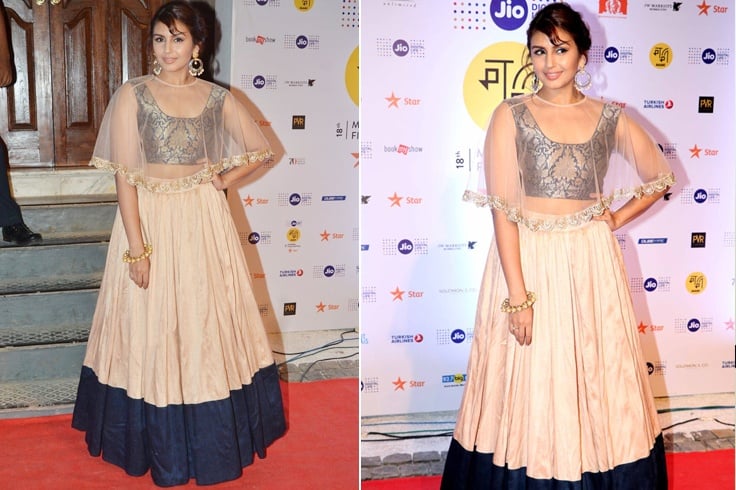 Nandita chose to shine her intellectual persona in a saffron saree. Keeping it simple and sober with a potli and gold jewelery, the dusky beauty observed deserving spotlight on the red carpet of the Mumbai Film Festival opening gala. The Happy Bhaag Jayegi star, Diana Penty wore a couture piece from Amit Agarwal, in a rather unusual combination of lemon and beige. We have to admit, the lady made for quite a stylish appearance at the opening night of MAMI, donning this number. Special mention for stylist The Hidden Button for styling this minimalistic look with a pair of natural pearl earrings from Harsh Sagar. Hair and makeup artist Kritika Gill rolled her tresses into a slick back top knot to complete this high voltage look. 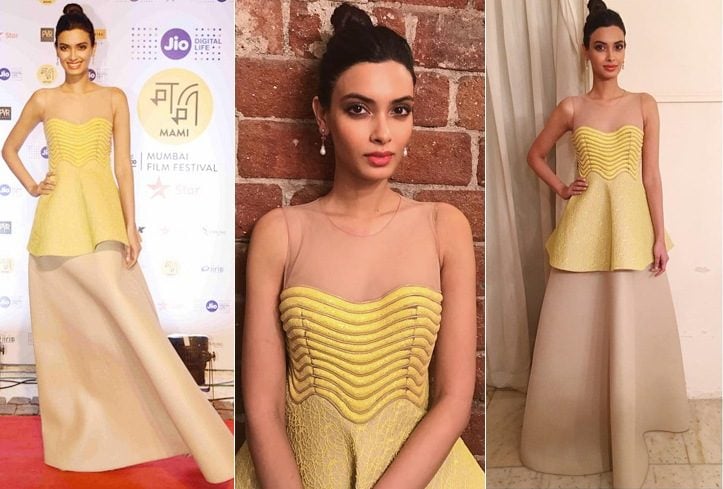 Mini Mathur was also spotted at the MAMI festival opening night, celebrating movies. For the evening the lady draped herself in a “Wear it as you will” saree from Raw Mango. The exceptional drape and florals in muted tones of kale and mustard rendered quite an endearing look to the actress. 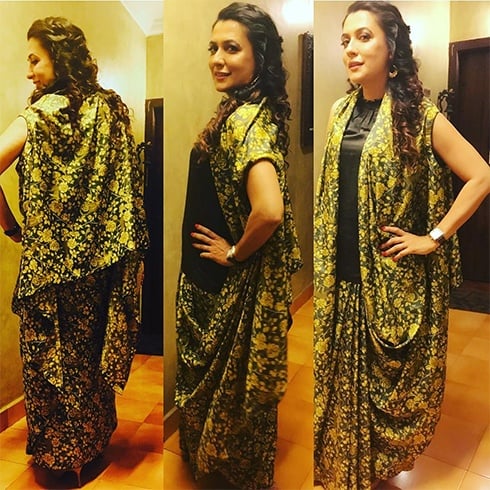 Richa Chaddha represented the modern Indian fraternity at the Mumbai film festival, JIO MAMI. For the evening at the opera, the lady wore maxi dress with white and yellow nautical stripes on the bodice. The dash of shimmer on the top added some red carpet glamour to the breezy high – slit maxi dress. Richa elevated this athleisure look wearing a head band. Genelia made for a rather boho chic appearance at the MAMI festival in a kale knee length dress from Amit Agarwal. The detailing with a tad of fringe were the highlight elements of this dress. The marsala peeps took Genelia’s look to the next level. With Ritesh by her side, the lady looked adorable. This was all the glitz and glamour from the opening night. Stay tuned as we unfold the 18th Mumbai Film Festival, JIO MAMI.

Here’s How To Get Rid Of Face Redness Easily

How To Get Rid Of Double Chin

Sonam Kapoor Creates Sensation With Her Style At Cannes 2016

Fashionlady - March 10, 2016 0
After bagging the coveted International Woolmark prize in 2014, the Indian designer Rahul Mishra, stepped up at the Paris Fashion Week with an amazing...