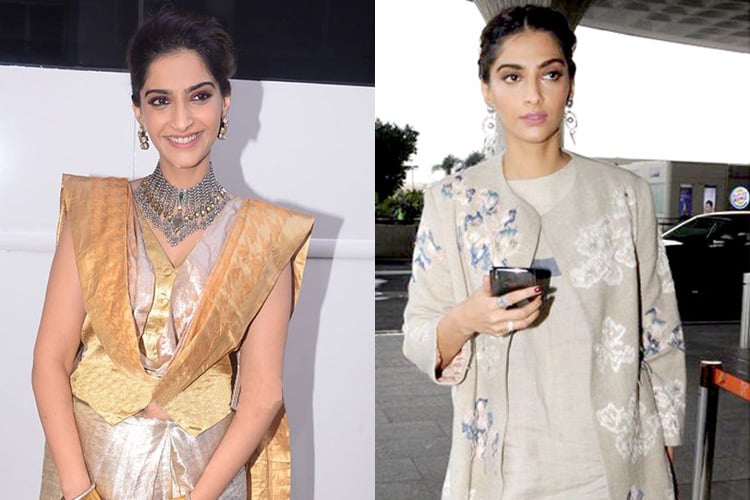 With Padman up for release on the 25th of January, we are finally getting some back to back wowness from Bollywood’s numero uno fashionista.

What we totally love about Sonam, is her attention to detail.
The woman invests in both picking an outfit and styling it with some novelty, thereby serving us a style cocktail we are bound to love.

This theory of her’s finds proof in Sonam’s most recent saree look, which has gone viral courtesy it’s drape.

In lieu of Padman promotions, the woman made a stop at the Sa Re Ga Ma Pa Marathi set to connect with their audiences and talk about her upcoming.

Opting to go desi, Sonam under the guidance of her stylist sister Rhea Kapoor, decided to deck up in authentic six yards.

However the way she draped her Hemang Agarwal saree was no way near to authentic. The dual tone metallic weaves in silver and gold looked upscale and glamorous.To render uniqueness to her saree tales, Rhea had Sonam wear the saree gujarati style. However the palla instead of falling ahead was taken cross sporting more of a dupatta look. 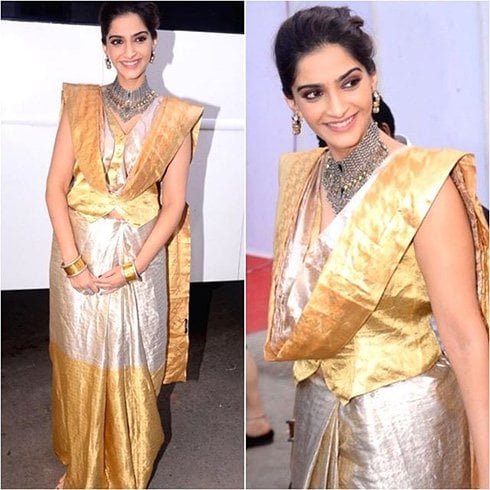 Another distinct factor adding to Sonam’s one of a kind saree was the blouse, which was fittingly replaced with a vest in the dual metallic tones

To observe more prominence, Rhea had Sonam don a beautiful attention seeking necklace from the house of Amrapali. Adding some extra sparkle were broad kadas in silver and gold combination that Sonam adorned both her wrist with and a pair of beautiful earrings.

A pretty ponytail hair updo, dewy makeup with intense eye shadow and a pair of metallic kolhapuris sealed this look to perfection.

For her inflight diaries, Sonam donned a worthy Ekaco number. Looking exotic was Sonam Kapoor wearing the subtle and much sophisticated weaves. The blue highlight on the silhouette and edges amped the overall desi charm of the diva. The makeup gave Sonam’s eyebrows and eyes more definition while a more glossy shade of pink lip color beautified her lips. A braided bun ensured her tresses be tamed through the flight for the woman knows she did be treated with a host of shutterbugs on her arrival. 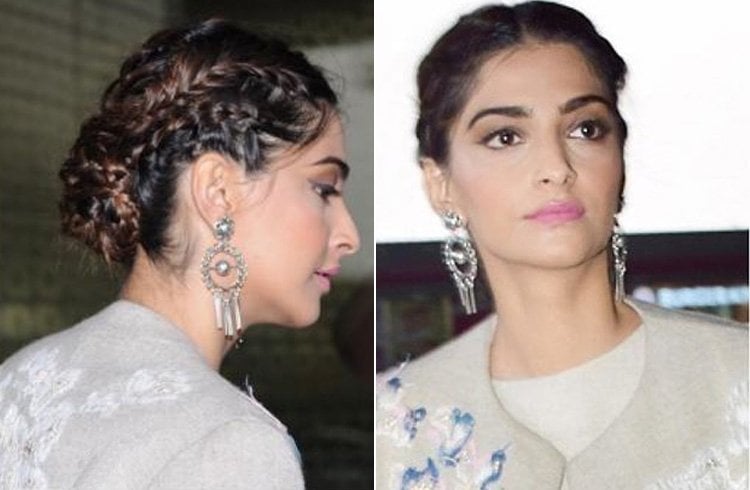 B-town fashion ambassador has yet again proved her swag.

Top 5 Most Expensive Barbie Dolls In The World