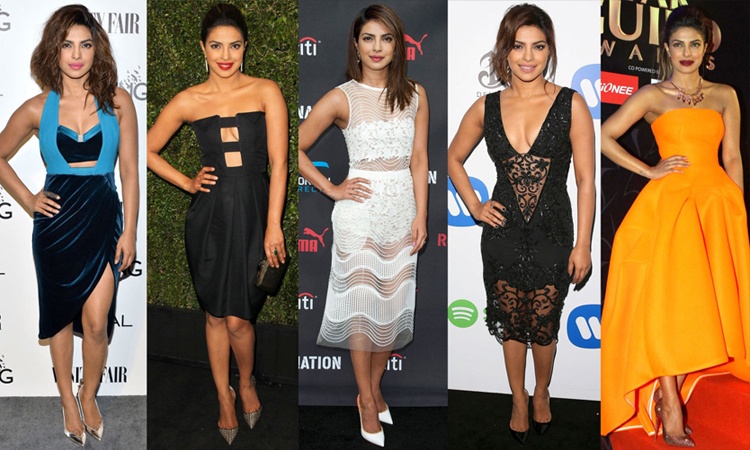 The attitude and confidence with which Priyanka has carried herself, has won her a place on the international map of entertainment. But talent alone doesn’t suffice if you want to grab all that limelight. You need to hog the focus in events full of the who’s who of Hollywood and Bollywood. Priyanka Chopra, before being an ace actress was a renowned model that makes championing the style game a lot easier for her. Of course she stays surrounded by a village of stylist working their perfections on her, but hey, we just cannot not give her the due credit.

Actress Priyanka Chopra puts in a lot of thought every time she is about to take to the red carpet. She stunned her admirers in an elegant creation by Lebanese designer Zuhair Murad at the Oscars night. She said she wanted a classic to wear to the Oscar and this white lace craft is every bit that. 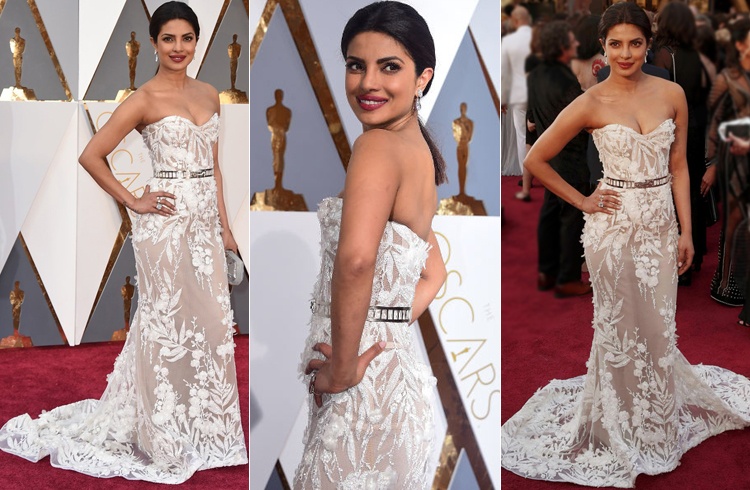 The Quantico star was flawless as usual in the Gauri and Nainika gown she picked to make one jaw dropping entry to the Toronto International Film Festival. The single shoulder white gown featuring naughty cut outs at the waist did wonders to her silhouette and that black strap at the shoulder broke the monotony of white. Nothing would have been better than a pop of red, and that is exactly what she chose. 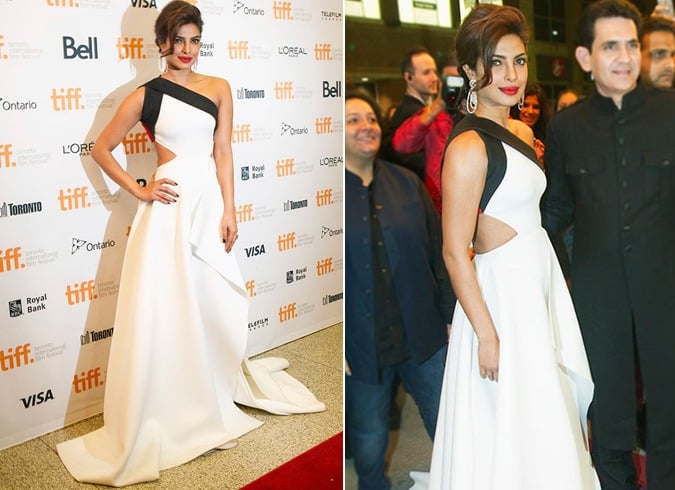 She has gradually got a hang of the international fashion and to grab all the eyeballs, have become a thing of ‘no effort’ for her. Having lent her voice to the character of Ishani, it was obvious Priyanka would make an entry to the premier of Planes. But only when we saw her in this form-fitting Maya Crispin jumpsuit with a metallic accentuation flattering her tiny waist we realized how ahead of others in Bollywood is this actress. 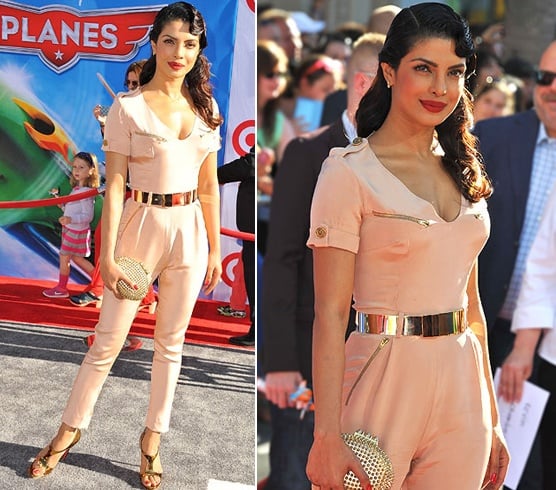 She wowed her fans at the People’s Choice Awards dressed like a shiny disco ball, every bit in a positive way. When you want some glitter and are debating between gold and silver, you wear both of them. And you wear it like the Baywatch babe in Vera Wang ankle length dress. Those pointy bellies did help her standing out of the crowd. I was fangirling over Piggy Chops till she took to the stage, sharing it with John Stamos. To attend the Grazia Young Fashion Awards, Priyanka settled on this amazing coat-dress by Ashi Studio. We all agree that she was one head turner in this black ensemble. Her matching Dior pumps added to her witchcraft. By now it was established that the girl from Bareli is a fashionista. And not only her attire but her make-up and hair are goals too. This immaculate side bun just speaks for itself. 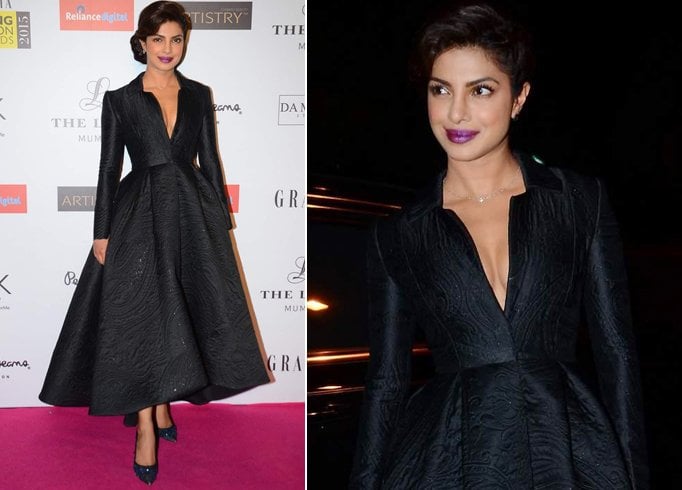 The woman has been flying from one award show to another, so many of them to bag and so less time to get ready. But never has she let business stand in the way of looking glammed up. She arrived at yet another award ceremony held in Vancouver and was magnificent in a black floor length gown by Arpan Vohra. The halter neck gown features vertical gold embellishments that not only glazed out but also added some extra height to the star. 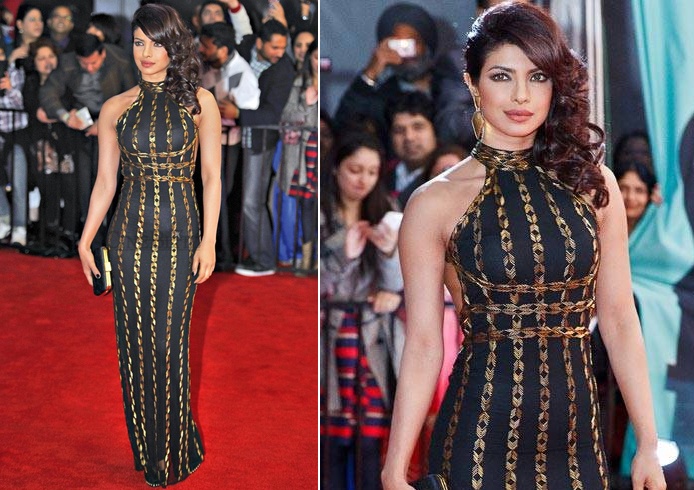 No one can ever go wrong with a little black dress. And neither can any diva ever go wrong with some French brand Lanvin. When you blend the both together, you get Priyanka Chopra at Chanel/Charles Finch pre-Oscar dinner party channeling her inner naughty girl in black. Those peek-a-boo cut outs are killing it. The star was a vision at the Emmy’s this year in her epic red number. The Microsoft Theater in L.A came to a halt when she walked in dressed like a dream in this one shoulder Jason Wu creation. The full length gown had all the fabric needed to get the actress all the flow she wanted to boast. A sleek pony tail and a Taylor Swift red lipstick is all that required to turn every shutterbugs focus to her. 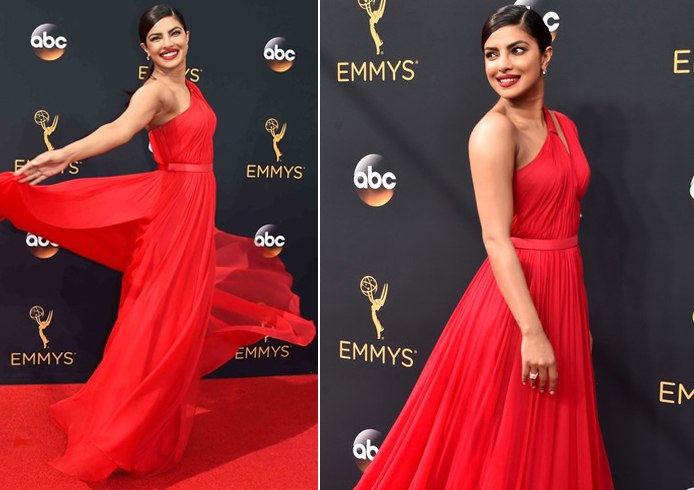 She is just a couple of years old in Hollywood and has already garnered all the press people covet after spending a lifetime in the Industry. But this is not the peak, as we are waiting eagerly was she has to offer in Baywatch. We are totally watching.
Images Source: elle.com, rediff.com

Power Dress Up Your Way To Success, Just Like Our Tinsel...

Fashionlady - December 3, 2017 0
Feminism is in the air and looks like our fashionistas from B-town are onto making a point on behalf of the pretty part of...