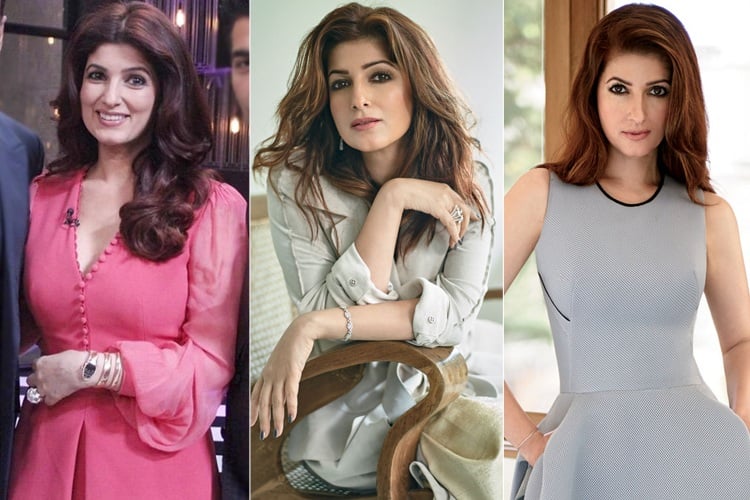 Twinkle Twinkle, You are still a star.

She’s witty, she’s sassy and she is everything a star wife should be. She is bold and does not shy away from speaking her mind.

Gorgeousness combined with an epitome of style is what Koffee with Karan, Season 5 brought on screen last Sunday. After a whole lot of effort by host Karan Johar, for the first time ever, Akshay Kumar and Twinkle Khanna, together graced the television on the second episode of B-Town’s most sensational chat show. While Akshay continues to mesmerise us, it was Twinkle Khanna aka Tina who totally stole the show. Candid, opinionated and graceful to the core, the lady wooed us with her impromptu responses and that witty sense of humour. And yes not to miss, her chunks of solitaires adding all that sparkle to her persona.

We have to admit with much candour, Twinkle accepted that movies was never meant for her and that she was a horrible actress of sorts. In a way we are glad that Tina made a timely exit from the tinsel town and restored her career as an interior designer and now an established and popular writer.

Courtesy the lady’s intellect Mrs. Funnybones is blessed with an immaculate ability of putting across societal facts adding in a distinct humour element. Tina actually forces her readers to ponder over the smaller aspects of life yet ensuring the reader leaves the book with a light heart.

One vast distance Twinkle has traversed from her Mela days, is with respect to her personal style. Today Twinkle is counted among the top dressers in B-Town, with her confidence soaring higher with every passing day.

The lady definitely knows how to deck up the classy way. With few of her past spotting we noticed her extraordinaire with respect to dressing up just right for the occasion.

The lady seems loyal to the strictly no over dressing rule. Sophistication, panache and mostly an endearing colour palette seem to be her defining guidelines.

Be it casual chic or the desi attire, Twinkle Khanna carries all outfits with much ease and style. We give all the credit to her slender frame and her charming persona. For her debut on the Koffee with Karan couch, Twinkle dressed up pretty in pink. Senior editor Vogue, Priyanka, draped her muse in a knee length number from Alexander McQueen. The complimenting accessories from Bulgari surely added the royal touch to Twinkle’s appearance. Rocking the plunging neckline with a pair of solitaire earrings and ring, Twinkle redefined her class. 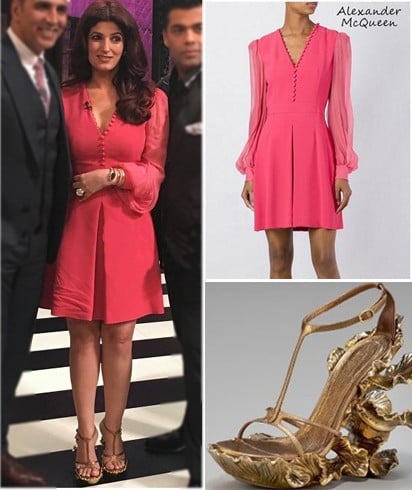 The episode was a power packed one with a host of revelations, stories, fun filled moments topped with a romantic moment created by Akshay for his beloved.
With the show being all about interesting revelations this episode too gave a peek into the secret life of Twinkle Khanna.

K : What does Akshay have that the other Khan’s do not have?

K: If you wrote a book on Bollywood, it will be titled?

T : He looks like he is built to last.

K : The meanest thing one has said about your writing?

T : When you started writing columns they said Karan Johar is the new Mrs. Funnybones.

We have always admired Twinkle’s fashion picks, but after this interaction over Koffee with Karan, we are totally swayed by the politically incorrect Tina. Karan, we cannot blame for having Twinkle as the first and last Lady love of your life. She is indeed a stunner.

Do give Twinkle’s second book, Mrs Funnybones The Legend of Lakshmi Prasad a read. We are sure this one will be equally flattering and will leave you in splits.

7 Best Nutrients For Skin Care That Works Miracles When Eaten...

3 Designers Who Are Bringing Ruffles To Runways

Home Remedies To Get Rid Of Facial Hair

Learn It From The Tinsel Town Experts How To Get Ready...

Fashionlady - February 12, 2018 0
Every occasion has certain style expectations and knowing it is an art in itself. We and you might rattle our minds to find the...