Neither the fun ended with the Academy Awards nor the fashion carousal. After the big event, the real fun started with strong doses of fashion at the Vanity Fair Oscars 2014 party. Celebs, who had missed the 86th Annual Academy Awards, made sure to attend the bash.

And the Oscar ladies on the other hand, were quite enthusiastic to flaunt their new looks. For those who thought their red carpet outfit did not create much magic, they made sure to show up in a better way to compensate that miss.

While Hollywood poured in with full force at the bash, Vanity Fair’s editor Graydon Carter made sure to transform the 8680 Sunset Boulevard into a glamorous podium under the direction of architect Basil Walter. While most of the stars preferred to show up in nude colors during the day with men arriving in bold-hued tuxedos; the ladies opted for contrasting vibrant shades for the night. While Jennifer Lawrence had already been under the spotlight for her fabulous red gown and the trip, she showed up in a metallic sheer number for the party.

Lupita Nyong’o, who had been showered with complements for her red carpet choice, once again pleased the fashion police with her sweet white evening gown by Miu Miu.

Selena Gomez, who had missed the awards, showed in a semi-sheer gold, extremely elegant gown. Even Taylor Swift looked fabulous in her stark black gown.

Before we have a sneak peak at who wore what at the Vanity Fair Oscars Party, let’s have a look at the complete winners’ list of the Oscars 2014 – BEST ACTOR IN A LEADING ROLE:

BEST ACTRESS IN A LEADING ROLE:

The Lady in Number 6: Music Saved My Life – WINNER 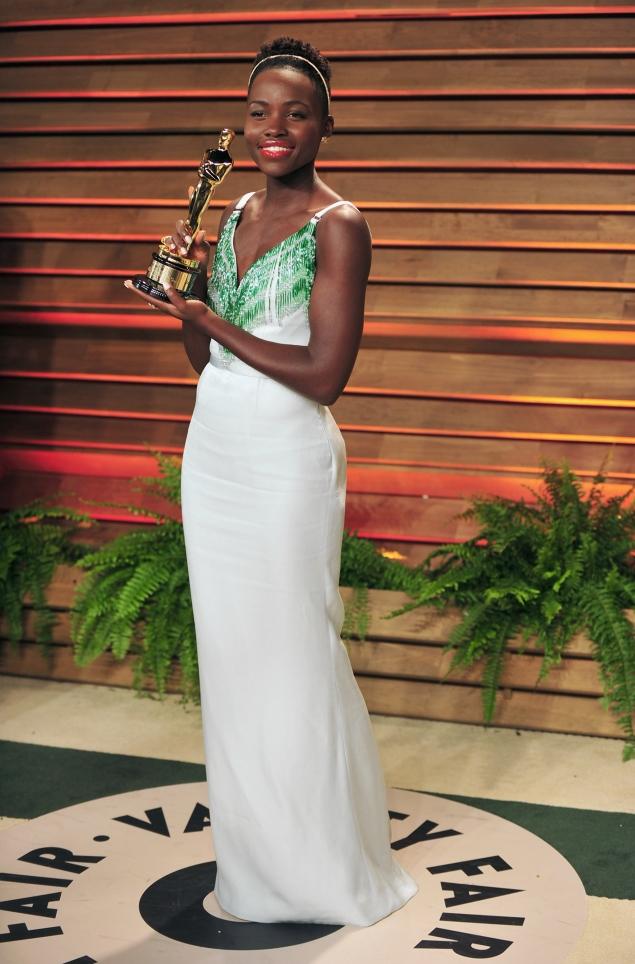 After gracing the red carpet with her custom-designed Prada gown in baby blue, the Best Supporting Actress awardee showed up in Miu Miu sea foam gown from the Spring Summer 2014 collection. The gown is accentuated with a green-beaded fringe neckline, which perfectly complemented her décolletage.

She had paired her dress with a matching pee-toe sandal and satin clutch by Prada and Fred Leighton jewelry and not to mention the cute hair band, which has now become her signature hair accessory. After showing up in a fierce red Dior peplum dress, JL once again stole the show as she emerged as a metallic goddess in Tom Ford number.

After flattering her figure in the red Dior peplum number, she showed up in a sexy mini Tom Ford dress with helmet hair. Her heavy kohl makeup did full justice to her outfit and event and was in full spirits even though she lost her nomination to Lupita. Known for her sense of humor, she was also kidding with Lupita, as she tried to steal her gold statuette back stage. Taylor might have missed the big event, but she made sure to attend the Vanity Fair bash, as she arrived in her signature sparkling elements. They say when you hang out a lot with someone, you start to adopt that person’s mannerisms and likeness as well. It seems something similar has happened with Taylor as well, who has been bonding greatly with Lorde for a while now.

Taylor picked a long-sleeved, sequined black gown by Julien Macdonald, which resembled the Tom Ford gown worn by her BFF Lorde few weeks ago for the Brit Award ceremony. The only difference is that she didn’t settle down for the same gothic makeup donned by her friend, instead she went for old Hollywood glamor with red luscious pouts and blonde look. After Emma Watson sizzled the red carpet, it was Selena Gomez who was under the spotlight. While JL turned out to be metallic goddess, Selena was the golden girl of the night. Clad in golden embroidered tulle halter neck  Emilio Pucci gown, the 21 year old actress made a smoldering entrance at the venue, flaunting a sexy keyhole cutout at the chest. She might have faced some rude remarks for her red carpet choice last year, but this year she looked stunning at both the events. While the 31 year old actress chose a black halter sparkling rhinestone-armored Gucci dress for the awards, she arrived in a custom Viktor & Rolf dress for the party later that night. She had paired her party outfit with Neil Lane jewels, Charlotte Olympia shoes, and a Roger Vivier clutch.

While Anne was all set to woo the audience before the camera, Jared Leto photobombed Anne as he jumped into the background which was quite hilarious. 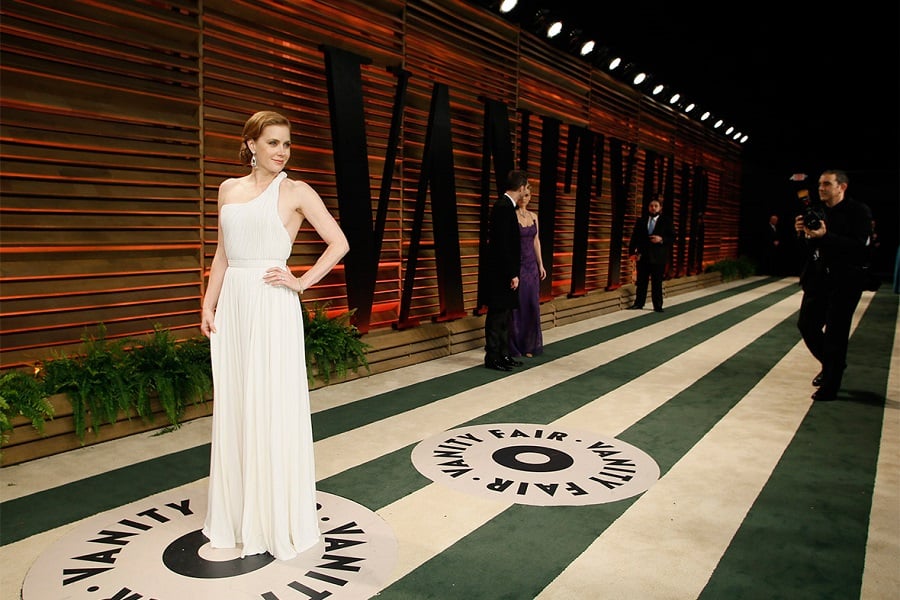 Amy Adams might have received mixed reviews for her red carpet tuxedo-inspired blue Gucci gown, but she tight lipped everyone later that night as she arrived in a white Carolina Herrera dress. The 39 year old actress whi was nominated for Oscar for the fifth time, paired her stunning outfit with Jimmy Choo shoes, a Tyler Alexandra clutch, and Tiffany & Co. jewelry. Sofia looked resplendent in a Roberto Cavalli number, which she had paired with Brian Atwood shoes and a Rodo clutch. Before the party, the 41 year old Modern Family star had tweeted,

“Trying my @brian_atwood custom made party shoes for tonight! #supermodeltall❤️❤️” the 41-year-old Modern Family star tweeted before the party. “Sharing the table with this amazing woman. So honored❤️” Sofia added later, along with a picture of an honoree. 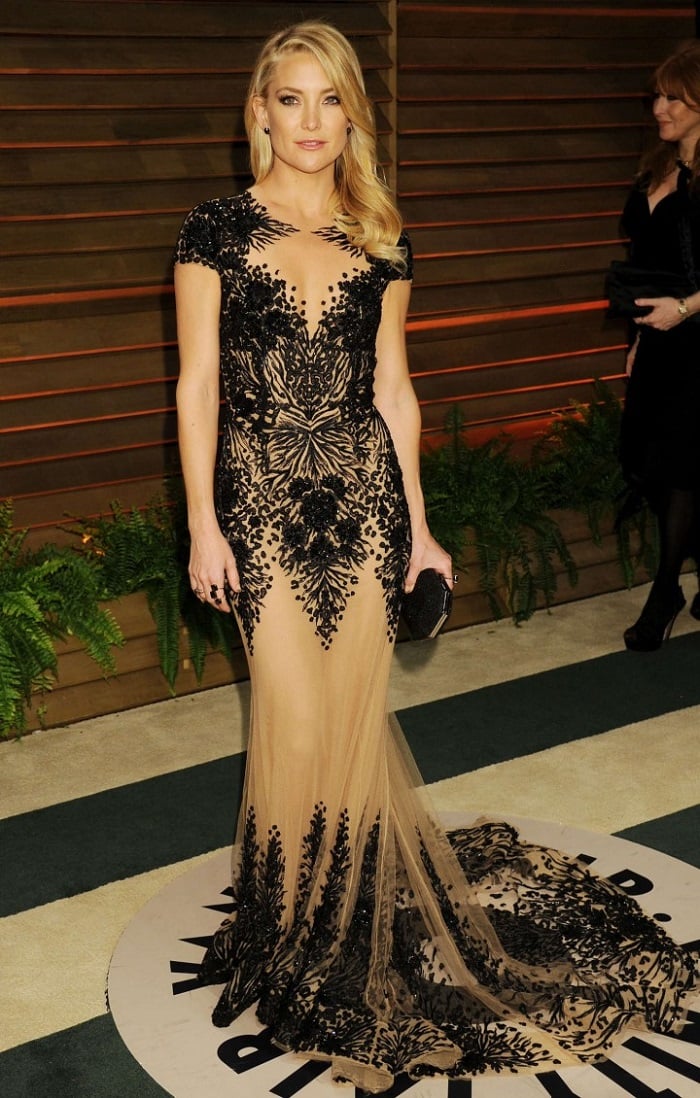 The 34 year old actress stunned in a Zuhair Murad gown from the Spring/Summer 2014 Couture Collection. The sheer gown was stretgically accentuated with handcrafted beaded detailing on her bodie and the floor-length hemline, which made Kate look exquisite as she didn’t shy away from flaunting her assets.

While she had settled down for a Versace gown for the awards at the Dolby Theater, this time she showed up in another amazing number. She had paired her gown with Christian Louboutin shoes, a Salvatore Ferragamo clutch, and Lorraine Schwartz jewelry.

Small Cute Tattoos For Those Who Like To Keep It Small...

You Have Got To Try These Ways To Style The Knitted...

Vogue Beauty Awards 2016 Laurels The Strong Minds Of The Beauty...

Fashionlady - July 30, 2016 0
The Vogue Beauty Awards that was celebrated by Vogue, India on their successful wrap-up of 2016 not only focused on the Bollywood beauties but...