The night of the Academy Awards arguably sees some of the classiest ensembles created by the ace designers in the world of fashion. But the fact is, our stars prefer bringing their conservative selves at the red carpet of the Oscars. However the grand after party that follows the most coveted award evening grants them all the opportunity to unleash their alter ego and transform into a rock star.

The Scandal star didn’t fear any scandal coming her way. The uber sexy Atelier Versace is doing all the talking for her. Cleavage – checked, back – checked, perfect smokey eyes – checked, and a killer pose – checked too. I am a fan of the yellow string pulling her dress together. Too bad, the Stuart Weitzman shoes she wore couldn’t be photographed through. The highest paid actress in Hollywood has arrived for the second time, and everybody just bow to the queen of the Hunger Games. Even before I start on the attire, let me point that lob out. That lob, my fellas, has a mind of its own. The actress nominated for her performance in ‘Joy’ looked chique in her Alexander Wang separates and Anita Ko Jewelry. And a moment in honor of those super shiny strappy Christian Louboutin heels. The Prabal Gurung creation sat perfectly on Olivia Wilde as that crimson color of the dress with its never-ending neck line couldn’t have gone wrong on that splendid face and flawless complexion. The chandelier earrings from Neil Land Jewelry surrounded her face easily with the hair knotted in a neat bun. The actress had all the reasons to rock the afterparty with the newly won award. And she chose to celebrate in a pale pink Monse dress and Roger Vivier heels that matched the dress. Something that I like about the dress is the unique strap that falls off shoulder on one side. That is not something we see quite often. And because she made the effort to match her shoes to the outfit, the slit gave ample space to show it off. The only thing that upsets me about the red carpet of Oscar was the absence of Taylor Swift and Selena Gomez. But the Vanity Fair party was a treat for all the Swifties and Selenators in the world. Behold thy highness of pop culture in Alexandre Vauthier Haute Couture. T –Swift was an Oscar Award herself and I am all jealous of the Jimmy Choo Bag she accompanied to the event. I could be a Jimmy Choo bag for that type of company anyday. And those Giuseppe Zanetti Heels. Don’t miss that the bag and sandals were all golden to match up the gold choker at the singer’s neck. The onscreen “Bad Blood” – off screen BFF of Taylor Swift, showed up at the afterpart looking like sheer royalty. Selena Gomez was a platinum goddess in her shimmery Louis Vuitton floor length dress featured some cute metal rings across the length of the dress. The Tod bag brought some more bling and Jimmy Choo is the name she picked up for shoes. 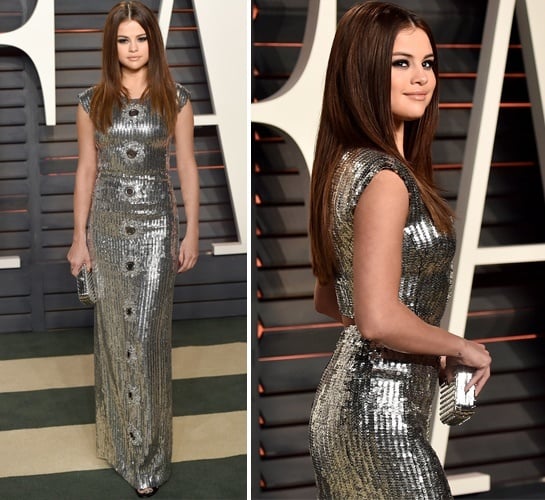 Fetch yourself a fire extinguisher before you lay your eyes on this Victoria Secret angel. Above the neck, she was sheer remembrance of old Hollywood glamour – the wavy bob, and the red lip. Neck down was where the modeling vibe came into life. The risqué Kaufmanfranco dress in red, with its strategically placed cuts didn’t fail to expose the best of that terrific supermodel bod – envious cleavage, abs to die for, sleek slit and the back side of the dress couldn’t have gone any better. 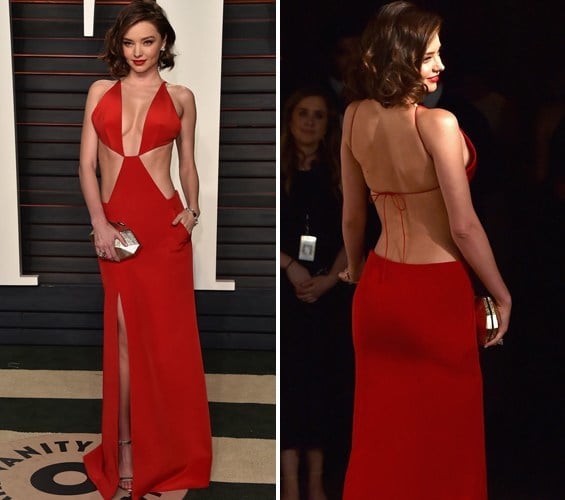 Her infamous curves were accentuated some more when the 41 year old turned heads at the Vanity Fair party in a flattering Versache gown. The dress had an interesting pattern of cream swathes thrown over a nude-lacy base. The look was completed with diamond earrings and towering black heels. The party was packed with full attendance from the famous who’s who in the industry. Side split dresses and lacy legs were ruling the fashion quotient. Others present at the party were Lorde, Gwen Stefani, Demi Lovato and Jessica Biel, all rocking their own sexy Avatars.

Why Does My Belly Button Hurt?

Fashionlady - February 11, 2014 0
Sometimes, romance from your favorite love stories can turn out to be true. One day, you happen to meet your Prince Charming unwittingly and...