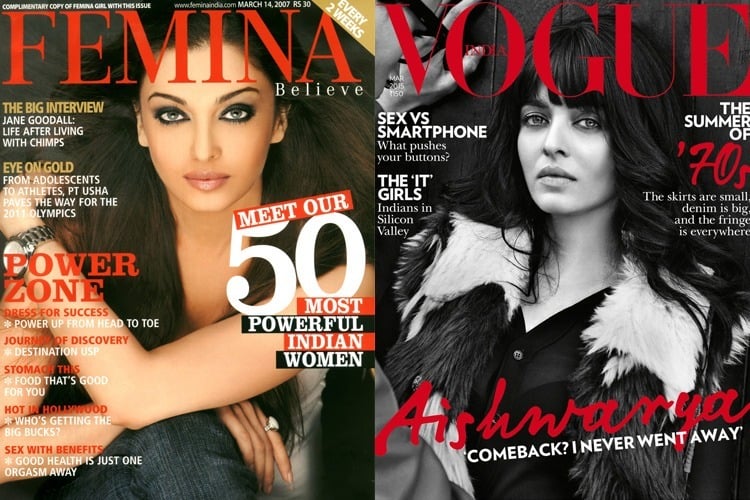 How do you all know her? Or how would you like to know her? As ex-Miss India and Miss World 1994, as the one who goes to Cannes year every year, as a reputed film actress, as a working mother, as Bachchan bahu or as Mrs Aishwarya Rai Bachchan? When there are so many things to pick, the word Ash is good enough.

In a similar vein, there is no beating Aishwarya Rai magazine cover. Her featuring on magazine covers time and again has proved one thing for sure – there is nothing like looks, talent and blessings from God when it comes to being an international star.

Aishwarya is a mix of confidence and naturally gifted looks which shows in magazine covers. Let’s check it out.

In the stunning appearance she makes on the cover of last year’s Filmfare issue, Aishwarya gives a pleasant shocker with her little black dress, light make-up and smoky eyes, and curly hairstyle.

Dressed in Sabyasachi lehenga in the latest edition of Bazaar Bride, Aishwarya Rai on the magazine cover page has a different story. Ash was styled by none other than the man himself for Sabyasachi Couture 2015. So much for the love of looking glamorous, isn’t it?

Elegance personified, Ash rules the world with Aishwarya Rai magazine cover photoshoot for Filmfare. Her killer looks shine through in this black and white image of hers.

Aishwarya Rai magazine cover photos perfectly capture Ash from queen to a mystical warrior in the Verve issue. She not only manages to grab eyeballs, but keeps you hooked onto this magazine cover.

Angelic beauty. That could perhaps be the best description as you lay your hands on Aishwarya Rai magazine cover. This Vogue cover shows Ash posing with her wings and super-sensational black looking attire.

Talking about India’s 50 Most Beautiful Women and Aishwarya Rai Bachchan has to be there without the blink of eye. Nobody can miss out her smoldering looks that virtually makes your jaws drop.

Aishwarya Rai Magazine cover photos always have a mystical delight to themselves. Pritish Nandy has brought about the mystique of Aishwarya Rai Bachchan in a heavenly manner in the cover page of Elle December 2010. It is one of Ash’s old photoshoots which brings her old world charm in full bloom, considering her high bun to the gown she is wearing to her heavy-winged eyeliner. Need we say more about the charisma of Aishwarya?

Ash should have been surely arrested for the stunning look she put up on Aishwarya Rai magazine cover in Filmfare Nov 2009 edition. What actually stands out in umpteen magazine covers where she features is her big looking green eyes. No wonder all her photo shoots are breathtaking.

Meet the most beautiful woman in the world Aishwarya Rai Bachchan on the cover of Elegant Living. She is an epitome of elegance as she flaunts grey suit teamed up with black polo net hat.

Celebs Add the Wow Factor To International Magazines May-2018

Fashionlady - May 2, 2018 0
Religiously for a long time now, we have been bringing the international magazine covers to your coffee table. Besides offering some inspiring stories and the...