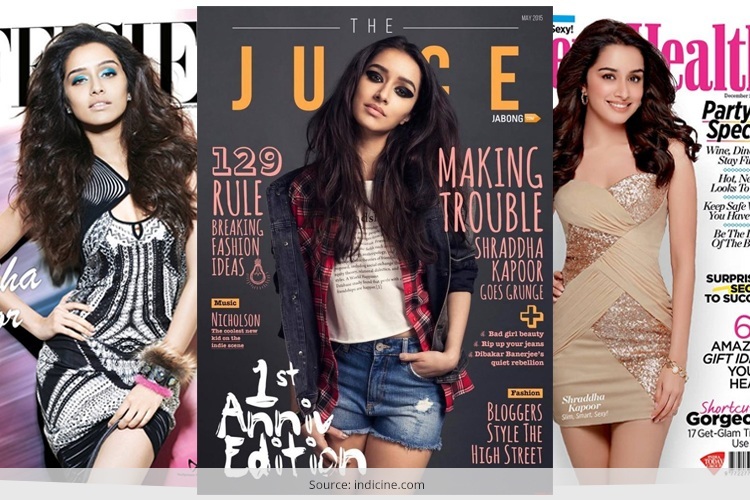 You saw her as the main female lead in the films Ek Villain, Aashiqui 2, Any Body Can Dance 2 and Haider. Her entry into films can’t just be associated with her genes. A few films old, Shraddha Kapoor magazine cover is speaking volumes of her acting skills, charm and poise.

Without a second lost, let us check out the magazine covers page in which Shraddha Kapoor features. Maybe they might happily get you to sing the blockbuster song she sang Galliyan Galliyan…Teri Galliyan in the film Ek Villain.

By the way did you know that her father Shakti Kapoor (who has played more of a villain in Hindi movies) loves her magazine covers so much that he has framed all of them for memory sake? Wow…what a doting father he is.

The magazine covers page says ‘Her Time To Shine’. No disputing that. Shraddha Kapoor looks the best and hottest find when it comes to Bollywood.

Catch the Blockbuster Princess Shraddha Kapoor as the cover girl on Hi Blitz! magazine covers page and rightly so. Dressed in Manav Gangwani Couture and Jewellery designed by Hazoorilal Jewels, it certainly speaks a lot about Shraddha Kapoor height.

On living her dream life or on way to becoming the top notch busy bee Bollywood heroine? Well looking at Shraddha Kapoor weight in this magazine covers page, she could surely give classes on how to look slim and trim.

This magazine covers page takes our dear Shraddha Kapoor to global frontiers. Dressed in Italian fashion label Fendi, she has all the spunk needed for a fearless performer.

Doesn’t Shraddha look like a beauty to the core on this magazine covers page? In this
photo shoot done for Cosmopolitan, Shraddha Kapoor said that she’d be willing to give up the role of a lifetime, if she is able to find true love.

Looking super hot and sexy is Shraddha Kapoor on the magazine covers page of Verve in 2015. The best part is that this photoshoot was done by the magazine to celebrate its completion of 20 years. It is not just the black costume she wore but Shraddha Kapoor height was equally commendable on this cover.

The magazine covers page of Femina Oct 2014 says Shraddha Kapoor is on a roll. Well, she always is ever since she started off in the Hindi film industry.

This Phataka issue talking about Deepika Padukone, Priyanka Chopra and Sonam Kapoor has Shraddha Kapoor on the cover of CineBlitz. Isn’t she dressed to kill in this magazine covers page?

Staying in news is part and parcel of film industry. It seems our Shraddha Kapoor didn’t want to miss the opportunity. She made a controversial statement by teasing guys during her periods. Not divulging more. Just pick up the issue and find it for yourself.

Posing in none other than Bordelle Spring Summer 2014 bodysuit and American Apparel shorts, doesn’t Shraddha look awesome, hot and sexier than ever?

She does deserve your attention right now. Considering this magazine covers page featuring Shraddha Kapoor reminds one a bit of ‘Baywatch’ days, doesn’t it?

You think she is coy on this magazine covers page of FHM? She is looking steaming hot rather. Hope you would agree.

Currently Shraddha Kapoor is busy shooting for the film Baaghi. She will be singing with Farhan Akhtar in the Rock On!! 2 sequel.

I hope her upcoming films leave a stamp in the Box Office with ease just as much as her films of the past.

Choosing Necklaces For Neckline: Tips To Make The Correct Choice

Keep These Tips in Mind While Shopping For Promise Rings For...