She has come a long way from Saawariya to Prem Ratan Dhan Payo. And Sonam Kapoor magazine cover would be the perfect way to answer that.

Get a mug of cappuccino as I take you through the magazine covers page of Sonam Kapoor which will make you love her all the more.

Dressed in Gucci Fall 2015 outfit, Sonam Kapoor did every amount of justice to the 100th issue of Vogue. She surely kicks off year 2016 in style.

You can imagine whatever happened when our dear Sonam met Armani. Can’t say it was a house on fire but surely she rocked in this Sonam Kapoor magazine cover. It so happened that this photo shoot done for Vogue helped Sonam document her trip to the Armani Spring 2015 show, and thereafter meet the designer Armani.

Nothing could have been more glorious than this magazine covers page showing Sonam Kapoor height as she sported big hair in diva style wearing Louis Vuitton outfit.

Featuring Sonam Kapoor in a striped Gucci Pre-Fall 2014 gown which brought the 60s look with mod eyes, Sonam Kapoor photoshoot for magazine really stands testimony to the art of dressing.

Featuring in the debut edition of this bridal magazine is Sonam Kapoor. Dressed in Sabyasachi designed costume that had bridal colours of red and yellow, her golden ensemble makes Sonam Kapoor magazine cover look absolute luxury.

Looking absolutely stunning and straight out of the sea is Sonam Kapoor dressed in Amit Aggarwal couture on the cover. This was shot in Istanbul. 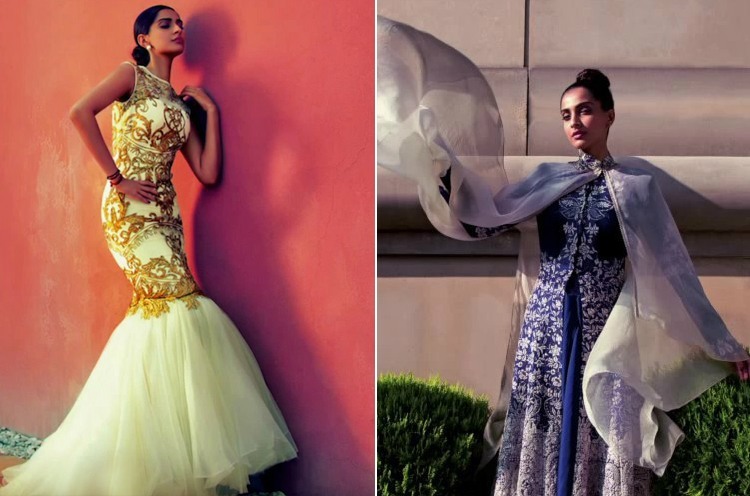 The June edition of Vogue India brought double delight. There were double covers, one where Sonam Kapoor was dressed in Alexander McQueen gown and in the other cover she was wearing Victor & Rolf bodysuit. While Sonam’s makeup and pose in both these covers looked the same, the locales where she was photographed were different.

Photographed by Mara Desipris for the cover shoot of this women’s magazine, Sonam Kapoor looks the girl you would run after as she breezes in the woods. Sonam is dressed in white dress designed by Namrata Joshipura.

Sonam Kapoor photoshoot for magazine Hello! makes her look gorgeous, chic and an iconic figure. Catch her in this jaw-dropping long gown in red with accompanying heavy jewellery.

Being an actor herself, I wonder why she says “I don’t think I will ever marry an actor’.

Dressed in Fall 2011 Vuitton dress on the magazine covers page is Sonam Kapoor. There is more of her in the inside pages dressed in Ferretti, Valentino and Tom Ford.

Talk of great covers and here is this Sonam Kapoor cover where the lady is dressed in Falguni and Shane Peacock outfit for Fall.

How sensational did you find Sonam Kapoor on magazine cover? Did it have anything to do with Sonam Kapoor weight or Sonam Kapoor age? Look forward to your answers. A word or two would do.

Fashionlady - February 4, 2017 0
Magazines are women’s best friends, especially during spa time and leisure time. And picking a magazine to read is often a herculean task. We...