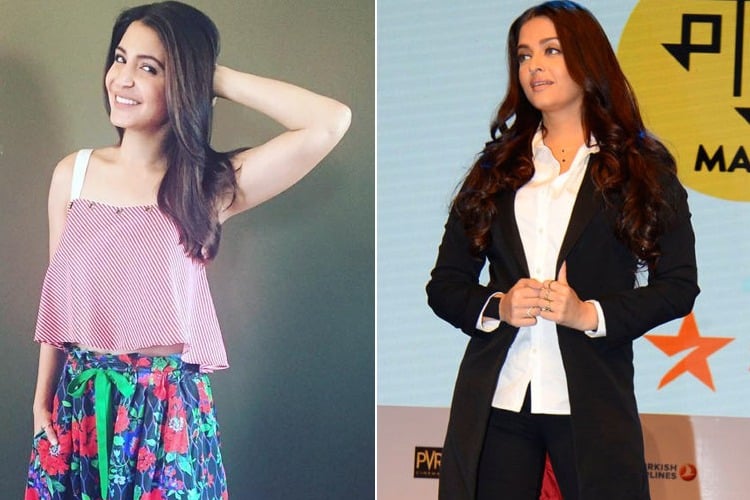 This Diwali we will witness a clash of the titans.

With Karan Johar’s, Ae Dil Hai Mushkil and Ajay Devgan’s, Shivaay slated for a Diwali weekend release, this Friday is going to be one blockbuster day at the Box office.

While Shivaay’s promotional run up was smooth, Ae Dil Hai Mushkil had to face a long haul, considering the presence of Pakistani actor, Fawad Khan. But all is well in KJO’s world now and the cast and crew is all set to battle it out.

With the stars of Ae Dil Hai Mushkil, concluding their promotional campaign we got you a quick roundup of all the looks the ladies of #ADHM were seen carrying at the promotions.

Scroll down to savor it all before you hit the screens to watch them as Alizeh (Anushka) and Saba (Aishwarya).

For the exclusive cast and crew screening of Ae Dil Hai Mushkil, Anushka made for a striking appearance in red. Celebrity stylist Alia Al Rufai and Nayaab Randhawa, dressed up Anushka in a draped red ensemble from the label Urvashi Kaur. The plain red got a gold upgrade with jewellery pieces from Isharya and Fizzy Goblet jootis. Some bold touches added there with hair stylist Marianna Mukuchyan pulling her tresses in a slick mid-parted bun and makeup artist Puneet B Saini giving that extra dose of kohl and mascara. Blushing In Sukriti And Akriti

To promote her upcoming on the popular Star Plus show, Yeh Hai Mohabbatein, Anushka made an appearance with Ranbir Kapoor wearing a soft peach lehenga set from Sukriti and Akriti. The subtle golden embroidery on the peach escapade looked quite fetching for a to-be bride. Stylist Alia Al Rufai, assisted by Nayaab Randhawa, further dolled up this look with a pair of elaborate earrings in gold. Hair stylist Marianna Mukuchyan added some extra drama braiding up the front edges while makeup artist Puneet B.Saini gave the lady a glowing face that complimented the blush outfit. For her evening with the ABP news, Anushka dressed up in a navy blue one-piece ethnic ensemble from Bollywood’s favorite designer, Manish Malhotra. Alia Al Rufai and Nayaab Randhawa, prepped up this one with chandbalis from Isharya and a small bindi. Marianna Mukuchyan gave Anushka a slick bun while Puneet B.Saini aced a natural glam look. 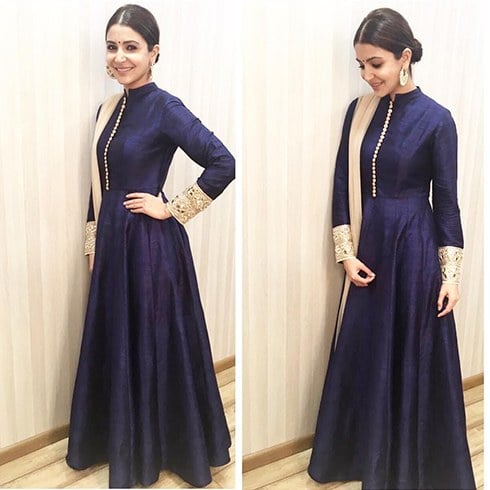 For her date night with Rajiv Masand and Komal Nahata, Anushka wore a black printed maxi with shoulder cut outs from international label Michael Kors paired with black Christian Louboutins. With her designated #ADHM stylist Alia Al Rufai at the helm of this look, Anushka was seen sporting her fun vivacious self. Tresses let loose with soft curls by Marianna Mukuchyan and a pretty face by Punnet B.Saini. A perfect pout look by the lady there. 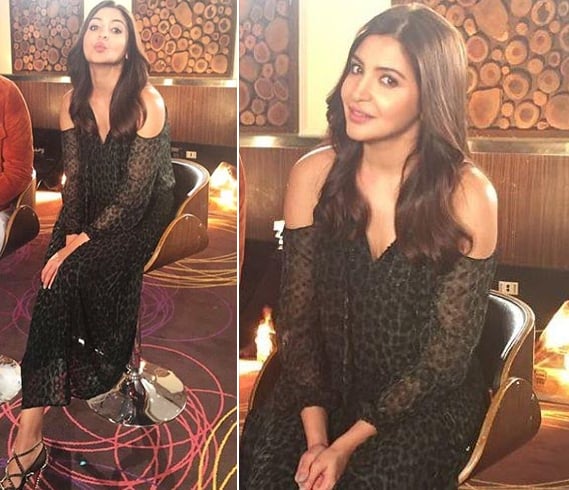 Florals By Kenzo For H&M And Stripes By Pinnacle

Stylist Alia Al Rufai proved her mettle yet again, by styling Anushka in a look that literally lit up our screen with that color burst and contrast play. Pairing a lively floral skirt from Kenzo for H&M with a sailor top sporting red stripes from Pinnacle by Shruti Sancheti, the look was in perfect sync with Anushka’s cheerful persona. Hair stylist Marianna Mukuchyan let Anushka’s hair down while Punnet B.Saini gave her natural spring summer radiance. 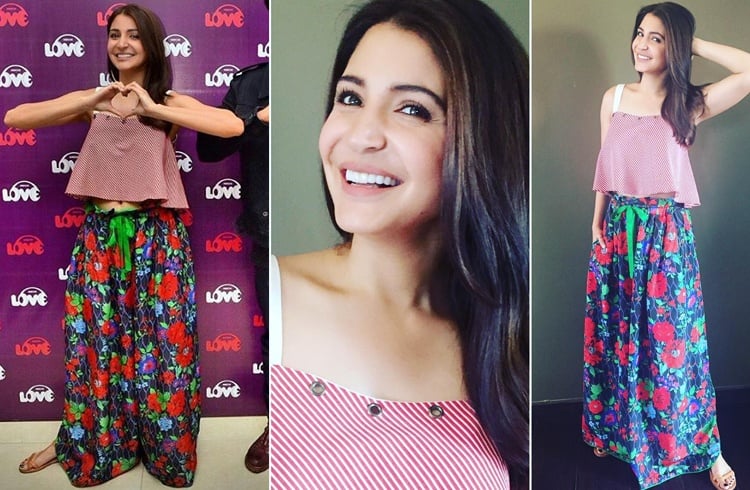 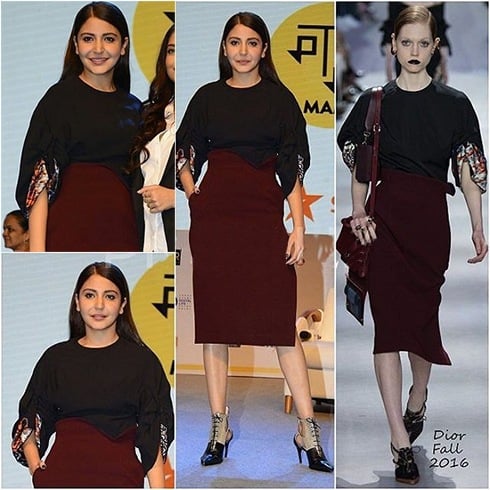 Anushka made for quite a boho chic promotional appearance in a full sleeve printed maxi dress from the special Gigi Hadid for Tommy Hilfiger edition. Stylist Alia Al Rufai and Nayaab Randhawa paired the dress with a glamorous pair of heels from Jimmy Choo. The Pull and Bear neck piece added to the boho quotient of this look. Hair stylist Marianna Mukuchyan and Makeup artist Puneet B. Saini rounded up this #ADHM promotional look. For her appearance at the Kapil Sharma Show, Anushka was seen donning a beautiful white gown and jacket from the Epic Love collection of Anita Dongre. Stylist Alia Al Rufai added to the regal look, accessorizing it with beautiful Kishandas Jewellery ring and Curio Cottage earrings. A neat bun by Daniel and Bauer and a charming look by Punnet B. Saini completed Anushkas royal Indian look. Black And Gold In Sabyasachi

For a yet another promotional look for the Kapil Sharma Show, Anushka wore a black and gold look. She made a definite statement wearing a black ensemble lined with gold embroidery by ace couturier Sabyasachi. For some more impact makeup artist Puneet B. Saini gave the lady charcoal eyes and hair stylist Daniel Bauer gave a slick back look. Stylist Alia Al Rufai styled up this rich ensemble with a beautiful choker necklace from Kishandas Jewellery. We heart this one. 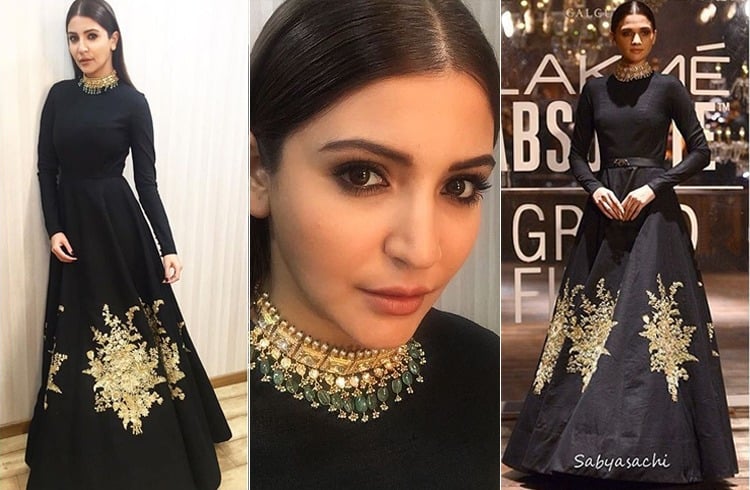 At the finale of the singing reality show, The Voice Kids, Ranbir and Anushka made an appearance to talk about Ae Dil Hai Mushkil. For this appearance, stylist Alia Al Rufai dressed up the lady in a yellow ethnic ensemble from Abu Jani and Sandeep Khosla. The white embroidery and mirror work combination added to Anushka’s sunshine. Beautiful tresses by Marianna Mukuchyan and glowing face by Puneet B. Saini rounded up this ethnic look. 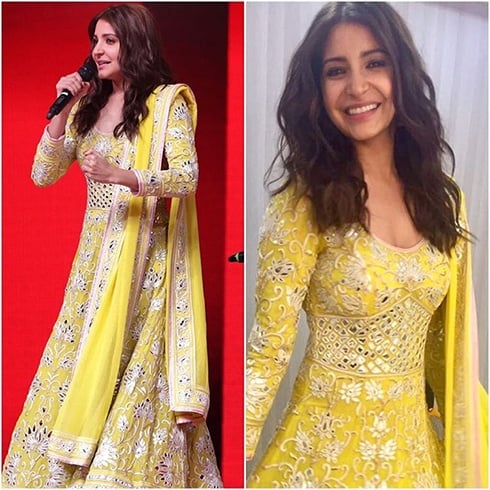 After giving us some major envy with her Filmfare photo-shoot with Ranbir Kapoor we were hoping to see more of the Bachchan bahu during the promotional run up. But Ash gave us only two yet super appearances while promoting her upcoming Ae Dil Hai Mushkil.

Aishwarya Rai Bachchan suited up for the interactive session with Rajeev Masand and Anupama Chopra at MAMI. The lady gave a power packed performance dressed up in a black pant suit paired with a crisp white shirt from Bombay Shirts. To add some playful drama to this look Ash completed this boss look with a pair of black tasseled Louboutins and a chic neckpiece. 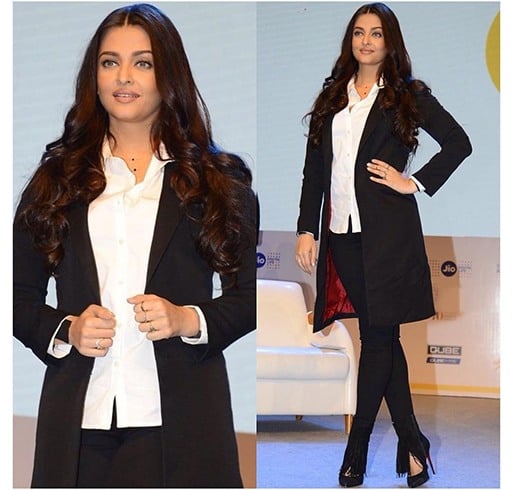 For her appearance at the Kapil Sharma Show, Aishwarya dressed up in an off shoulder couture piece from Manish Malhotra. The blue escapade layered with white all over embroidery looked ecstatic. The high slit and asymmetric hem line complimented the lady’s curves just right. With her hair pulled on one side, Ash looked charismatic. 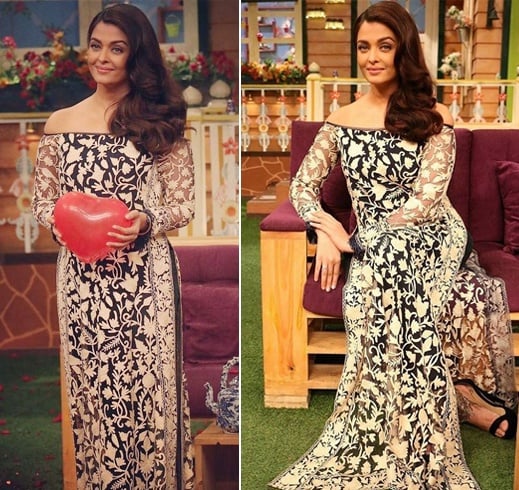 Totally the two leading ladies of Karan Johar’s Ae Dil Hai Mushkil have already stolen our hearts and we can’t wait to watch them sizzle up the silver screen.

Kalki Koechlin Flashes Pleasant To Power-Packed Looks And Stuns Us

11 Flax Seeds Benefits For Lose Weight And Get Healthy

Top Makeup Brands in India That Are Dominating The Market For...